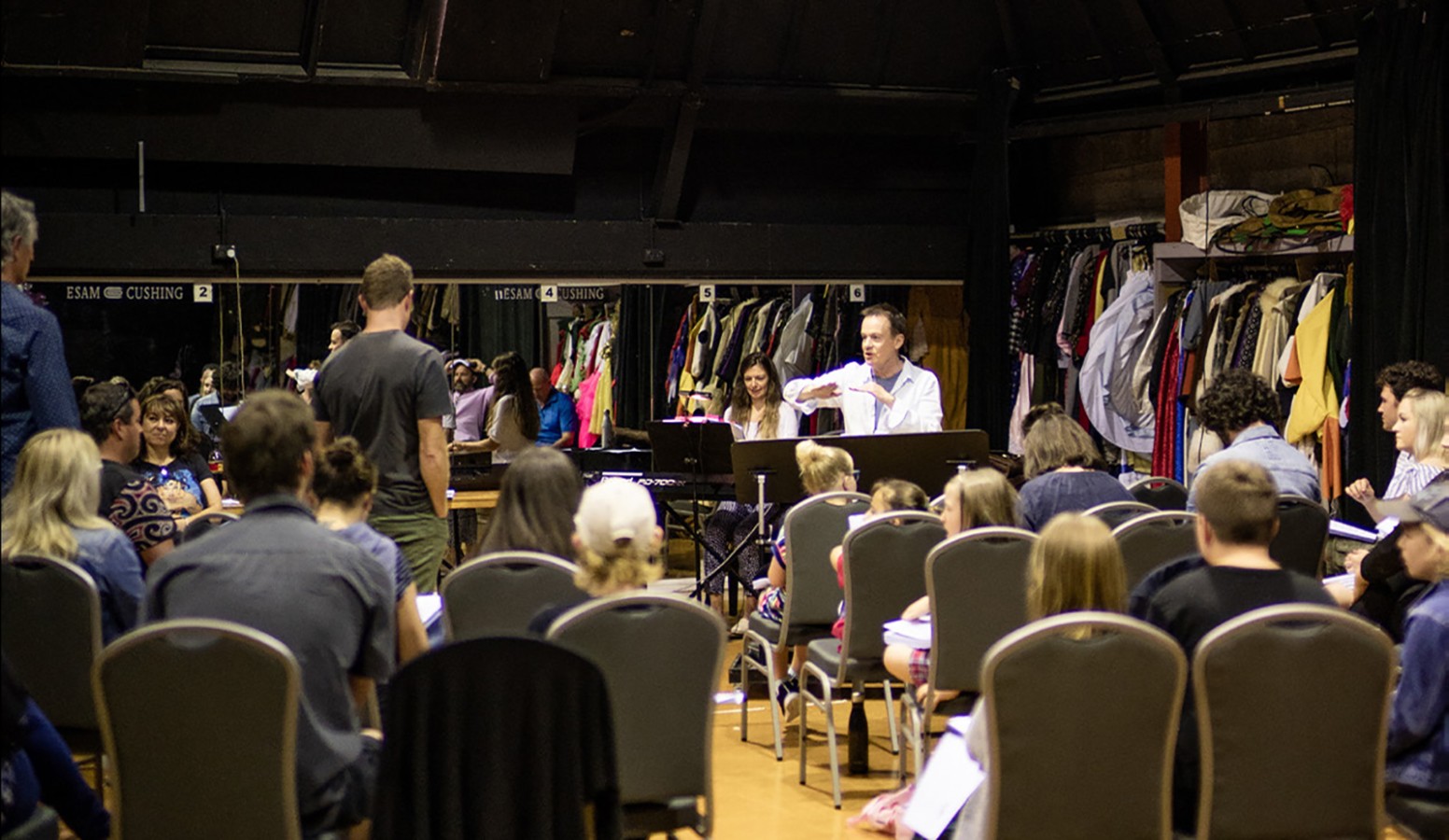 While we are outside enjoying the sunshine, a whole chunk of the community is locked up in dark rooms in deep concentration. It’s over the summer months that Hawke’s Bay’s annual big musical theatre productions will be in development.

Festival Opera’s La Traviata is cast and rehearsing, due to open in mid-February. Napier Operatic Society’s Les Misérables has just wrapped auditions – a long and gruelling process involving over 200 wannabe thespians – and will commence intense rehearsals through January and February ahead of a May opening.

Lisa-Jane Easter is at the helm of ‘Les Miz’, a show she’s directed twice previously. She says Hawke’s Bay has a wealth of all-singing, all-dancing performers, something that was apparent right from the beginning of the process.

“We have completely got an abundance of talent here but sometimes someone will audition who you haven’t seen before. There’s a rawness there,” explains Easter. “My ‘Christine’ for example, she took off her Red Bands at the door, opened her gob and sang like an angel.” Her ‘Valjean’ too showed his skill in projecting emotion during his audition. “It was so real, so beautiful, I burst into tears.”

Right through the summer months Easter will run her cast of 50 through tightly disciplined rehearsals up to three times a week for long hours at the Tabard Theatre. It’s a stone’s throw from seaside Ahuriri, but a world away from sunshine and ice cream.

“We can hear the beach from where we are, we can hear children playing!” laughs Easter, “This work is hard and fast, but I enjoy my confines and my boundaries.”

The La Traviata chorus of 40, with a few locally-based leads, rehearse weekly – working from inch-thick scores in Italian – long before the full cast and orchestra get involved. Rehearsals are serious with everything from posture to breathing under the watchful gaze of artistic director José Aparicio. Anna Pierard who runs Festival Opera explains the process, “There’s a protocol in the rehearsal room, it’s very much about teamwork. Everyone knows when you’re not pulling your weight and you see how important it is to not let each other down.”

The company’s creative team includes Scottish stage director John Wilkie, who will be assisted by local Katherine Winitana. At 21 she has a degree in commercial music, is a song writer, jazz and blues singer and now opera convert. She began singing in the Festival Opera chorus and is Assistant Director for La Traviata after directing one part of the HBAF’18 show Scena.

“Being a creative person, I always want to do something different,” laughs Winitana. It was during lessons with Pierard that Winitana “got the opera buzz”.

“I fell in love with it,” she says. Directing though, brings a new dimension to her passion for the artform. “Directing is a different perspective. Picking out details makes you more aware, you’re working harder. I’ve got this brand-new taste for directing; it’s fresh and new and I want to experience every part of it.”

Directors put in a lot of background work before rehearsals even begin. Easter goes back to the original text. She knows the production well after seeing it eight times alongside her own productions of the epic story, but she’s re-reading the Victor Hugo novel to reacquaint herself with the themes and original intentions.

“Directing is very much done with your heart,” Says Easter. “The director’s job is to honour the playwright’s intentions. You have a plan of what you’d like to see.”

Winitana too does much additional research. “The director needs to know not just the storyline but when it was set, what’s going on in the world, traditions. The performance is just the tip of the iceberg.” 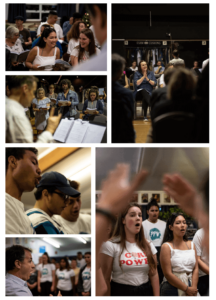 For Easter, part of the preliminary work includes getting her cast match-fit. There’s plenty of anaerobic exercise so actors can meet both the physical and vocal demands of the production. Some lift weights or drop weight to prepare for their roles.

“It’s lots of muscle memory and a lot of fitness,” says Easter. “You’ve got to be really fit to be in musical theatre, there’s no taking short cuts.”

Working alongside the directing team, both La Traviata and Les Misérables have a wealth of talent in their crews. Easter is thrilled to be working alongside musical director Mark Oldershaw, calling him her “musical crush”.

“It’s a beautiful creative collision,” she says. “It helps to have someone who thinks the way you do.”

Winitana too is working with a highly skilled team, many flying in specifically to work on the show. She’s keen to soak up as many parts of the business as possible. “In the creative industries, the more things you can do the more valuable you are.”

For both, decisions on which show come months before anything else. A final decision on La Traviata happened only days after 2018’s Madame Butterfly closed. Most of the recent Festival Opera works have been tragedies although “tragedy in the hands of an expert has plenty of chiarscurro,” explains Pierard.

Les Misérables’ rights have been bought by a consortium of theatre companies who share costs, costumes and sets. Easter specialises in the epics and after a sell-out season of Phantom of the Opera was a perfect choice for Les Miz.

This Napier Operatic production comes complete with all the kit, but usually a set would be designed and built in parallel with rehearsals. Festival Opera’s build began in December in a warehouse, the set designed by Aparicio himself.

La Traviata’sstars arrive in mid-January and are here for five weeks. An opera company in sunny Hawke’s Bay is a desirable proposition as it’s seen as the perfect place for a working holiday. For this reason Festival Opera often “gets lucky”, booking stars that usually need many years’ lead-in time. While they’re here the international leads coach those singers based here, especially the youth development programme Project Prima Volta.

Winitana agrees: “We’ve been lucky with the leads we’ve had. They’ve slotted in, done the work, talked to us like we’re equals.”

Singing opera takes particular dedication. Having skills and techniques handed down to a new generation of performers is an important part of the process. For Katherine Winitana that includes many skills beyond the actual singing: reading music, breathing correctly, positioning and posture.

Winitana: “All these endorphins are released, you’re on a high. It’s those little successes that build the piece.” 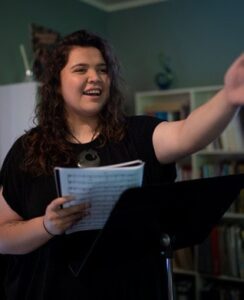 “You have to use your whole body to control your voice to throw it over a 52-piece orchestra,” explains Pierard. “It takes management, coordination, confidence and concentration.”

“You can’t ‘be yourself’. It’s acting. You work hard in rehearsal to not be yourself,” she says.

Both casts will move into the Municipal Theatre two weeks before opening night (La Traviata at the beginning of Feb and Les Misérables in early May). From there, the intensity kicks up a notch, explains Easter.

“In those production weeks, they are getting tired, they’ve already been going for hours and hours. My job becomes about keeping them well and keeping them focused.”

Wrapped around both productions is an army of volunteers who take on every little task from feeding and watering actors to promoting the show and selling tickets.

The full theatrical package only comes together in the very last days when the orchestra arrives for the final three or four rehearsals. Among those musicians about 12 will come from Hawke’s Bay and they appreciate the opportunity to play in a ‘pit’ with singers above them, something relatively rare in the provinces. Then the hard work sees its pay-off, the technical rehearsal whizzes by, as does the dress.

Opening night: the curtain rises, and Hawke’s Bay’s two biggest shows of the year present the fruit of all those hours of work to their audiences.

Being involved in the arts is good for us – good for our mental health and emotional wellbeing, good for…

“The Knowledge Bank is an ever-growing digital record of Hawke’s Bay and its people. Stories of the events, people, celebrations,…