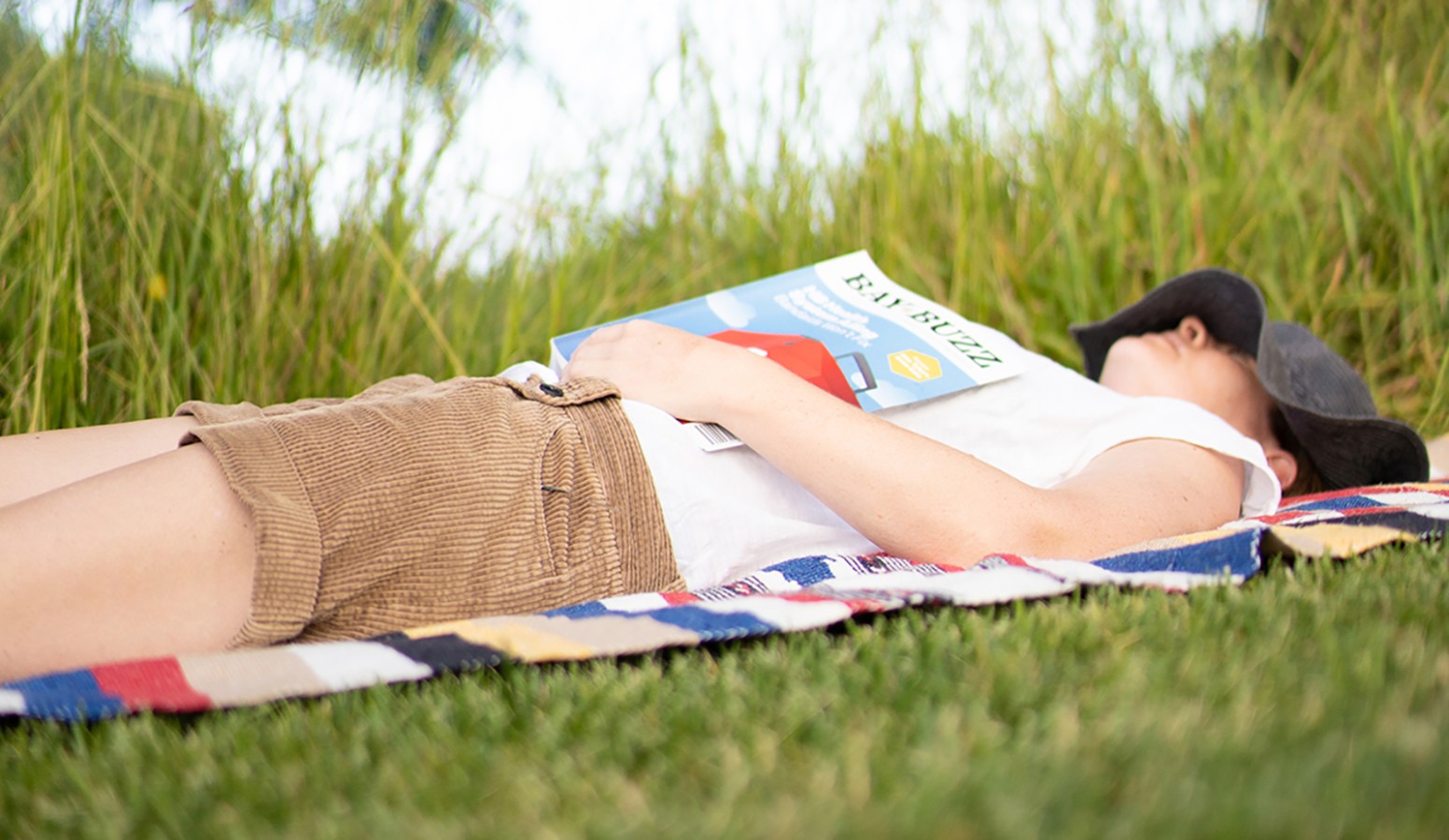 When I was a kid, I used to cringe at the nightly call from my mom – “It’s bedtime!”

[Made worse by the occasional, “And take a bath!” But I digress.]

“Why was it bedtime?” I silently rebelled. And perhaps in that early resistance to a voice of authority was born my lifelong determination to function on as little sleep as possible.

And ever since, I have considered that anything more than six hours sleep a night was for wusses – 1am to 7am, 2am to 8am, even less, just fine, maybe with a weekend sleep-in to ‘catch up’.

After all, what are we accomplishing when we’re asleep? Sleeping two more hours over an 80-year lifespan (average for Kiwi males is 79.5 years) basically wipes out nearly 7 years of ‘productive’ life. What a waste.

Boy, was I wrong!

Only upon sitting down to do some research for this column – intended merely as, ‘It’s summer, get some rest’ – did I discover how wrong. Now I’m a sleep zealot! Although still more in theory than practice.

My research led me to the international best-selling book, Why We Sleep: The New Science of Sleep and Dreams. Its author, Matthew Walker, is one of the world’s foremost experts on sleep, having run the sleep labs at Harvard and the University of California, Berkeley. It’s amazing what they put willing participants through and measure in these labs (to say nothing of the research done with other poor critters).

The book draws comprehensively from every bit of sleep research out there, not just his own, underscoring the overwhelming extent of expert consensus on the matter.

So, when Walker begins with the following assertions (which you might greet with some skepticism, as I did), consider that all the experts agree.

“Routinely sleeping less than six or seven hours a night demolishes your immune system, more than doubling your risk of cancer. Insufficient sleep is a key lifestyle factor determining whether or not you will develop Alzheimer’s disease. Inadequate sleep – even moderate reductions for just one week – disrupts blood sugar levels so profoundly you would be classified as pre-diabetic. Short sleeping increases the likelihood of your coronary arteries becoming blocked and brittle, setting you on a path toward cardiovascular disease, stroke, and congestive heart failure … Sleep disruption further contributes to all major psychiatric conditions, including depression, anxiety, and suicidality.”

His book examines each of these impacts in detail. And these are merely the impacts on personal well-being. Compounding them on a societal scale becomes truly alarming, as I’ll illustrate later. Indeed, the WHO has declared a ‘sleep loss epidemic’ throughout industrialised nations.

Marvelous nature has dictated sleep for all creatures, giving each one an internal biological clock, reinforced by daylight and darkness, what we term a ‘circadian rhythm’ that our brain enforces upon our bodies. And like it or not, for humans our clock is 24 hours and fifteen minutes, with a recycle time of 16 hours; after 16 hours of being awake, the brain begins to fail in terms of cognitive performance.

The cues of light and dark are processed by the suprachiasmatic nucleus in our brain, regulating everything from alertness to body temperature. The clock is enforced by a chemical flow of melatonin, beginning at dusk, telling the body ‘It’s dark, get ready to sleep’. Then, when light returns, the brake is put on melatonin, and the body is summoned back to wakefulness.

In addition, an independent process is at work. Throughout the day, a chemical called adenosine builds up hour by hour in the brain. It turns up the dial on sleep-inducing regions of the brain, creates a ‘sleep pressure’ that ultimately cannot be resisted (for most people, after 12-16 hours of being awake), not matter how much caffeine we use in the attempt.

Given Walker’s valuing of sleep, he detests caffeine, which acts to block, but not remove, the adenosine. “The consumption of caffeine represents one of the longest and largest unsupervised drug studies ever conducted on the human race.”

One of the most alarming realities established by sleep research is that sleep lost cannot be regained. The systemic damage done by each sleep-short night cannot be restored by ‘catching up’ subsequently. Sleep is needed to dissipate the daily build-up of the adenosine produced each day; the chemical doesn’t simply disappear, it accumulates without sleep. Thus chronic sleep-short individuals, like me, are effectively exposing themselves to chronic fatigue and a raft of nasty physical and mental side-effects.

Walker warns: “…millions of individuals unwittingly spend years of their life in a sub-optimal state of psychological and physical functioning, never maximizing their potential of mind or body due to their blind persistence in sleeping too little.”

Idle warning? A survey for Southern Cross Healthcare reported that 27% of Kiwis say they “feel tired or fatigued when you wake up” every day! Another 17% feel that way 3-4 times a week.

Clearly there’s a reason for this sleep business. In simplest terms, our brains must re-group, sorting and storing the day’s vast amounts of stimuli and inputs, re-calibrating and preparing for the day ahead. Ironically perhaps, the brain keeps working; we simply lose wakefulness. In this process, not all sleep is the same. Monitoring technology shows us the brain is performing different tasks during the different stages of sleep, so the amount and quality (or not) of each type of sleep has different mental and physical effects.

For example, during REM sleep (dream state), your brain actually stops sending any messages to your limbs. If it didn’t, your body might actually carry out the dramatic escapades you are dreaming about! Sleepwalking is the mildest form of things going awry in this respect.

During sleep, the brain is doing things like archiving fresh learnings so they can be remembered the next day (and years later), creating ‘shelf-space’ for new ones, mollifying painful ones, fine-tuning various chemical balances (e.g. glucose and insulin) and restocking the immune system. Sleep deprivation profoundly disrupts all of this.

Unfortunately, I haven’t the space here to go into all the neurochemistry involved (it’s described very accessibly in Walker’s book).

Driving accidents – 11% of New Zealanders report having fallen asleep at the wheel. Someone up at 7am and driving at 2am, with no alcohol, is as cognitively impaired as if they were legally drunk. Driving on less than five hours of sleep, your risk of a car crash increases threefold; with just four hours of sleep, the risk increases 11.5 times. In the US, sleeplessness causes a car accident every 30 seconds.

Medical practice – At issue today amongst NZ’s medical staff – doctors, nurses, midwives – are continuous lengthy hours (e.g, 12-hour shifts, lasting a week or more!), threatening their own wellbeing and those they care for as the risk and reality of error increases (a risk documented globally). Hence the pressure for ‘safe staffing’ rules, which need major improvement. Yet one DHB’s response (not HBDHB) was to place posters with the admonition: “Don’t stop when you’re tired. Stop when you are done.”

Education – Teenagers have an earlier circadian rhythm than adults (who rule), by as much as three hours. So, early waking, say 6:30am, for early school starts is effectively getting them up at 3:30am. In addition to crippling educational performance, Walker notes that this chronic sleep deprivation occurs at “the most susceptible phase of life for developing chronic mental illnesses, such as depression, anxiety, schizophrenia, and suicidality.”

There’s hope! But not from sleeping pills. Here are tips compiled from a variety of expert sources.

1. Stick to a sleep schedule (#1 on Walker’s list). Go to bed and wake up at the same time each day, as this will help train your body clock. Don’t sleep in on weekends or after a late night.

4. Exercise is great, but no later than 2-3 hours before bedtime.

5. Don’t take naps after 3pm, as this can reduce your sleepiness at night.

6. Relax before bed, allowing for some quiet activity such as reading or listening to music.

8. Don’t stay in bed if you are awake. If you do not fall asleep within about 15 to 20 minutes (estimated time, do not use a clock), get up and do some relaxing activity until you feel sleepy. Better than lying in bed worrying and becoming anxious about not sleeping!

A major controversy erupted last month in nutrition circles. The subject was red meat, and the risks (or not) consumption…