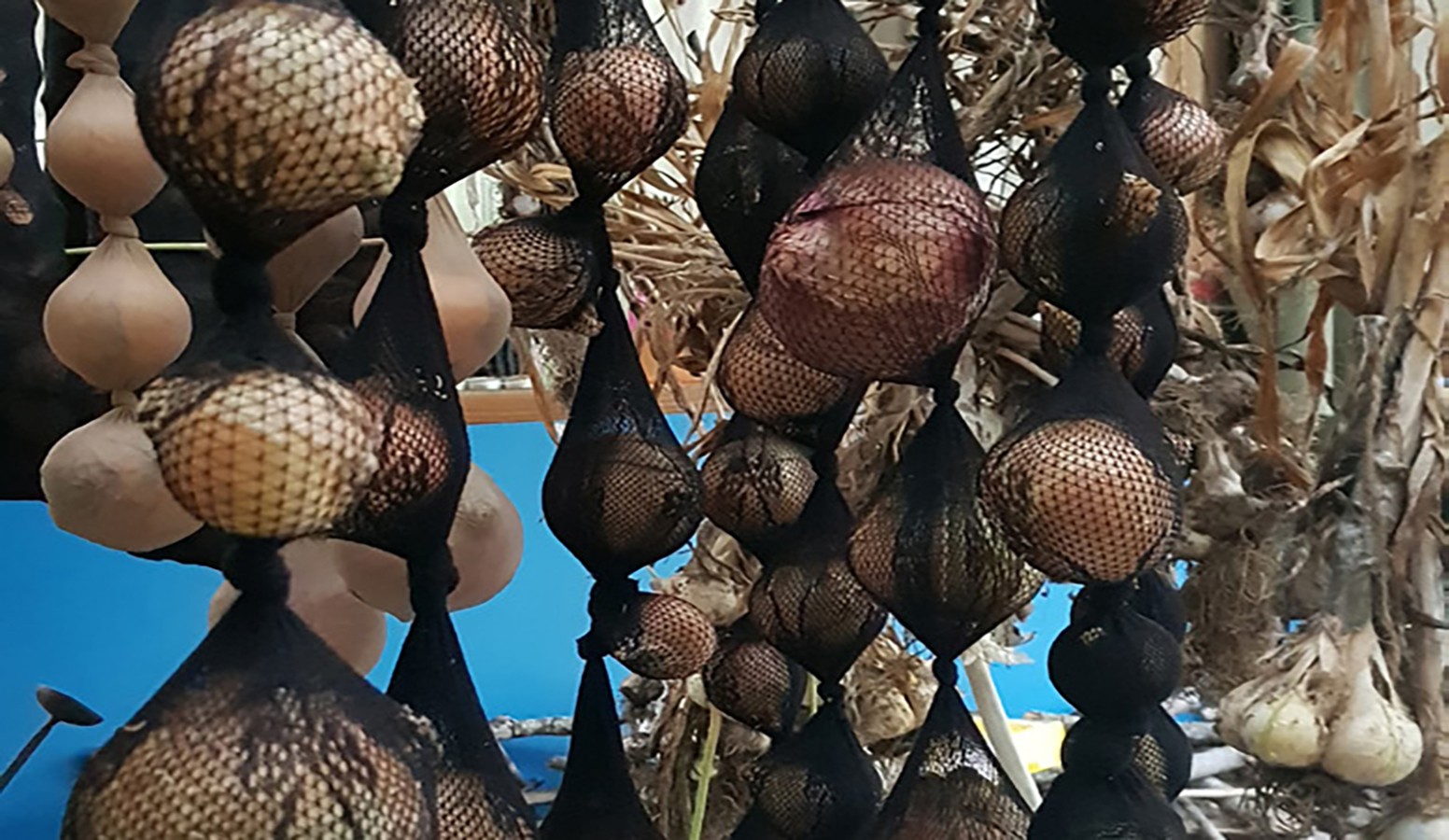 It’s 11 pm and The Frank Burkitt Band have sung their last encore to rapturous acclaim. Cars can be heard bump, bump over the culvert, homeward bound. The band, fed and watered, are ready to jam into the night, reluctant leavers sit in corners chatting and I have slipped away to write.

When people question my love for growing onions I have, with some small measure of smug, explained that onions are one of the supermarkets’ most sprayed vegetables. Apparently they are one of the least sprayed, but whoever let a fact get in the way of a good story. Not me.

I plant my potatoes deep down. When the first shoots eventually push through, involuntary gasps greet their entry. Waiting and patience are not my super powers and it is all I can do to control myself as harvest nears.

I fear I am addicted to digging up potatoes.

Perfect lumps of white gold. Treasure. I try so hard to just dig what is needed but I am weak. Just one more plant, oh go on then, another one and so it goes until finally I wrest myself away and take my laden bucket home. Sometimes I feel so guilty keeping the joy to myself that I head off around the farm scooping up any mokopuna willing to play potato pick with me. Sometimes they pretend not to be willing.

So, onions. We grow hundreds and I imagine them stored in long lines of plaited beauty, but both my growing and creative ability stops short of such rustic charm. An observer would more likely tut tut than thumbs up. We hang our walnuts in pantyhose, another effective but expensive option, so it wasn’t looking good for my ever-accumulating allium bulbs.

It wasn’t looking good until I found myself at the WhyNot shop in Auckland. If your heart elevates at the thought of a bargain and buying in multiples is where it’s at then this is the place for you.

I entered my cavernous, concreted heaven. Seasoned eyes scanned left to right, up and down. The trolley was filling nicely and that’s when I saw them. Stockings. Sexy fishnets. Black. $2.00 for four pairs. My breathing quickened as I began the great gathering in. The trolley was already spilling with 360 badges, perfect badges for our festival participants. Nothing says music festival registration more than ‘Courage of a Cowboy’ or ‘Shine like a Mermaid’.

Twenty-six pairs danced happily atop the laden trolley and suddenly common sense paid a visit where common sense has no right to be. Common sense suggested if these stockings were indeed sexy then maybe they would not be robust. I halted mid flow and headed to the counter. A young thing looked at me and I looked at her and we both looked at the 26 packets of long legged seduction on a stick.

Wrinkles wobbled as I smiled at her. “They’re for my onions,” I explained.

“I saw it on television.”

“I grow onions you see.”

Her eyes wandered to the 360 badges she would have to count.

I looked in a basket next to the counter. Little wind up horses for 50c each. Fifty would be useful. Another young thing was called in to help and finally I was away and heading home.

And now for the devastating conclusion to this riveting tale.

Those sexy stockings were as robust and as tough as old boots. The fishnet allowed the onions to breath and dance in the cooling breeze.

When I went back a week later fully expecting the enormous supply of stockings to be waiting for me, they were gone, all of them.

There must be a lot of onions in Auckland.

Thanks a bunch common sense.