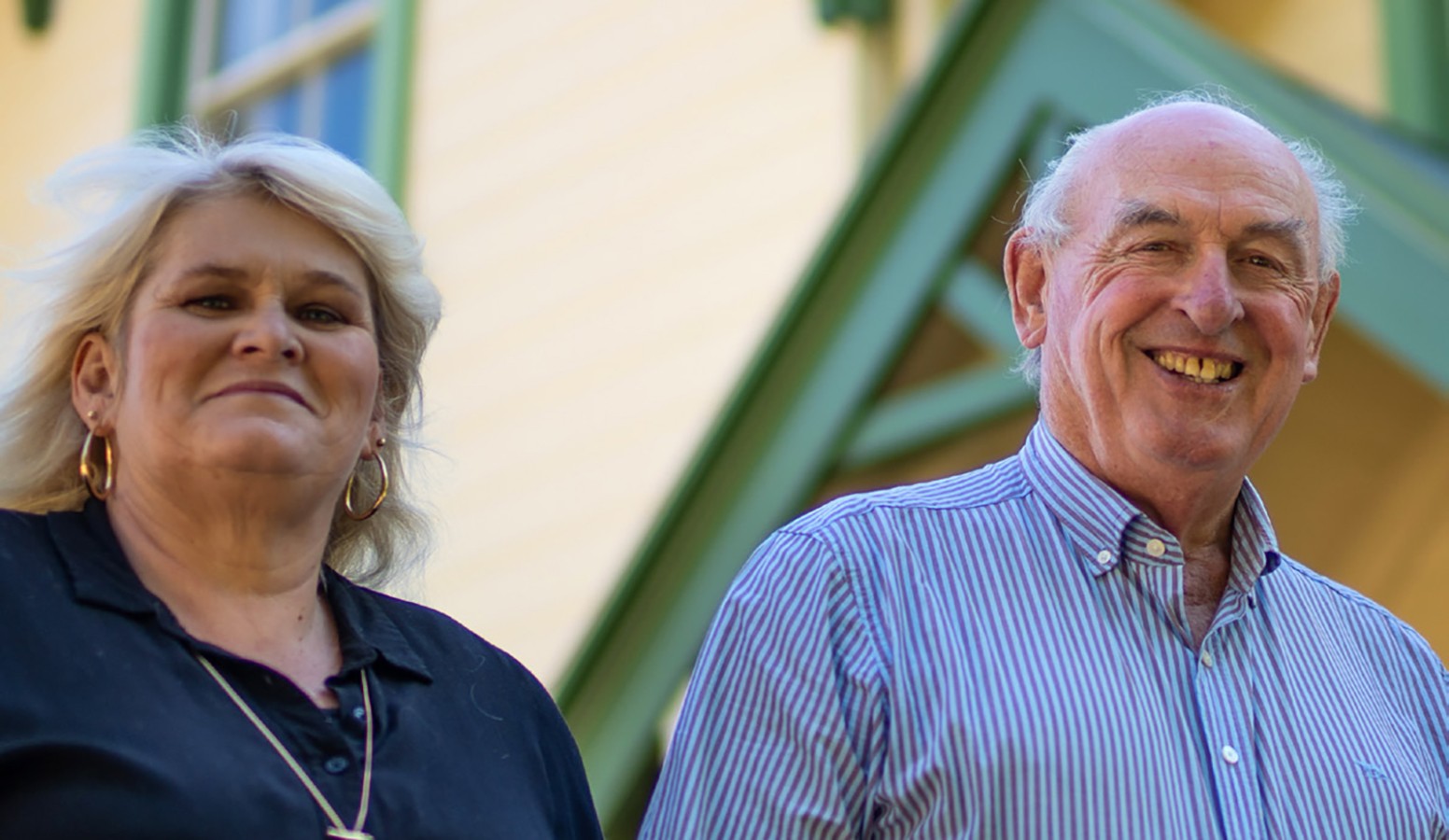 “The Knowledge Bank is an ever-growing digital record of Hawke’s Bay and its people. Stories of the events, people, celebrations, tragedies and day-to-day life that helped form the culture and landscape of the Bay we know today are gathered here in an easy-to-access format. Our volunteers collect personal and business stories, photos, memories and magazines, digitising them for everyone to read and enjoy.”

The introduction on the Hawke’s Bay Knowledge Bank’s website describes clearly what they do.

The Knowledge Bank, at Stoneycroft in Hastings, started nine years ago. “It was James Morgan’s baby; he’d been talking about the idea for a long time and it has required a lot of patience and been a long steady process,” says Peter Dunkerley, the current Knowledge Bank chair. “The first challenge was in getting Stoneycroft available from the Hastings District Council that had purchased it from the Ballantyne Family trust in 2003.”

The Stoneycroft homestead is significant. It’s a historically listed category two building, highly visible on the junction of Omahu 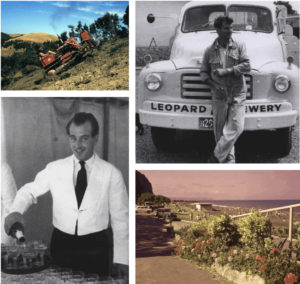 Road and the Expressway – a steeply-gabled Victorian-styled colonial house set amongst trees and now restored to its original state.

“It is very exciting the way the Knowledge Bank project has caught people’s imagination, and this is obvious when sifting through the collections on the website,” says Dunkerley. “There are hundreds of different stories that have been brought in and we have attracted a hundred or so volunteers who are passionate to help with the project.”

Keeping the work flowing is the responsibility of the two paid staff, part-timers Rachel Johnson, technology manager and Linda Bainbridge the daily administrator. Rachel’s role looks after the technology and training volunteers; she has been working there several years and is an integral part of the organisation. “It would be difficult to replace her as she has developed a specialist knowledge of the systems,” says Dunkerley.

Linda Bainbridge manages the collections and supports training, organises work flow and meetings, shows people around, runs open days and does the promotional work via social media and talks to groups in the community.

“We want people to know that if their family has lived, worked and played in Hawke’s Bay that their collection of photos and letters is exactly the kind of thing we want,” she says.

“It’s amazing how often people think their records of the past are not important. But it is – it reveals how people lived then, how much life has changed, washing for example, riding to school on horseback, kids always outside playing, family dynamics. We want to encourage people to bring in their family stories and photos.”

An advisory committee of six led by Grant Ancell deals with operational matters. They decide content and the order of work. He loves it and as a volunteer he’s there most days, working closely with staffer Linda in managing the collections. “When a collection comes in to us, we look at it and decide, is this of interest, can we use it, is it related to what we do?” he says.

“The photos are scanned at high resolution, documents are also scanned, transcribed by typists and put online, and while some information may not be used on the website we don’t want anything lost for ever, so we digitise it and it is then available for reference. Once the collections are recorded and digitised the paper materials are returned to the owners.”

Ancell says, “We have off-site transcribers, they listen to recordings of oral histories and type it out while working from home, but we only have three people doing this at the moment and we need more volunteers.”

“Working with volunteers at the Knowledge Bank requires a flexible and giving structure,” says Peter Dunkerley. “Our people might go away for two months, there may be health issues or family pressures, so things don’t always go according to plan and the unpredictable workflow requires a longer term perspective. We just take stock every so often, note our progress and can be pleased with what has been achieved for an organisation with a somewhat uncertain workforce.”

Volunteers seem to enjoy the social aspects of their work, sitting down at morning and afternoon tea times and lunching together. “It is very companionable,” says Ancell. On a typical day there will be a group of about 12-15 volunteers working on site, some come for the entire day or a couple of hours twice a week, others may do two or up to four full days. “It depends on what you want to do,” says Linda, “and it’s up to me as volunteer support to make sure our volunteers are working on the things that hold their interest and when they do get stuck with a computer question they are supported.”

History on a budget

Working on a budget of $60-$70,000 per annum, it’s the Board’s job to keep control of growth, sufficient to keep it manageable while keeping to a budget.

To achieve this they use a free-to-use computer software programme, the open-sourced Ubutu system that’s similar to Windows. Marketing is by word of mouth and through social media such as Facebook, Neighbourly and Volunteer Hawke’s Bay.

Sourcing funding is a full-time activity for the Board of four, consisting of Barry Cole, Bev Watkins, David Shand and Peter Dunkerley, who says, “We do all the money stuff to enable it to work long-term, developing the strategic plans to make the organisation sustainable into the future, but most of our effort goes into chasing funding.

“We have been very much supported from the beginning by Hastings District Council – by former mayor Lawrence Yule, now mayor Sandra Hazelhurst and councillor Malcolm Dixon. We have received $25,000 per annum from them and with extra project funding of $6,000 per annum for three years we have been able to cover wages of the staff.

Dunkerley reports major success in acquiring funding of $25,000 in 2019 from Napier City Council, and will be asking again for further grants. But the longer-term goal is to secure council funding on a three-year basis, including help from the Hawke’s Bay Regional Council. “So, if we got three lots of $25,000 per year that would make the whole thing more viable.”

The Board also seeks project grants from public charities and other sources and has received donations from philanthropic individuals that helped them through a shortfall in 2017. This year they hope to break even.

“Next year we hope to be able to take a step forward. We need to be able to look after our staff a little more fairly and to look at a longer term structure because we really need a manager, someone to liaise between the Board and the staff, so we are getting the word out.” The manager would need to be a volunteer because a paid manager would require considerable extra funding.

The Knowledge Bank recently has launched its new website thanks to Mogul and their employee Chris Webb, who is also a volunteer with Knowledge Bank. ‘Spec’d’ at $30,000, they got it done for $12,000, with a mix of professional input from Mogul and funding through Eastern and Central Communities Trust and public charities.

The major projects keeping everyone very busy include the Spiller photography collection from Napier. With a million images it is like “eating the elephant a teaspoon at a time” according to Peter Dunkerley.

The Balfour diaries are being transcribed – the daily diaries of a Hawke’s Bay farmer, giving great insights on the early history of Hastings. They are working with MTG on this project with a volunteer working at MTG two days a week using their equipment. The information will go up on the MTG website, but will be accessible from HBKB website. “Our vision is to work with the Hastings and Havelock Libraries in a similar way and in particular we are connecting with young people, they are our future and it is a high priority and it’s working,” says Dunkerley.

Paid commissioned work is given priority and an example is the John Bostock family histories. Bostock is publishing a book and the volunteers have been assisting by archiving and image scanning photographs.

Bigger things like the A & P Show will be a future project, hopefully to be funded by HDC. This will be a major history of the Show’s first five years and Dunkerley is certain that amongst the volunteers someone will have a passion for it and take up the challenge.

So much more could be done, like connecting with the Central Hawke’s Bay and Wairoa Museums to share historical knowledge. However it all requires funding and the freely-given time of the volunteers who work so hard.

The Hawke’s Bay Knowledge Bank would welcome more of both!