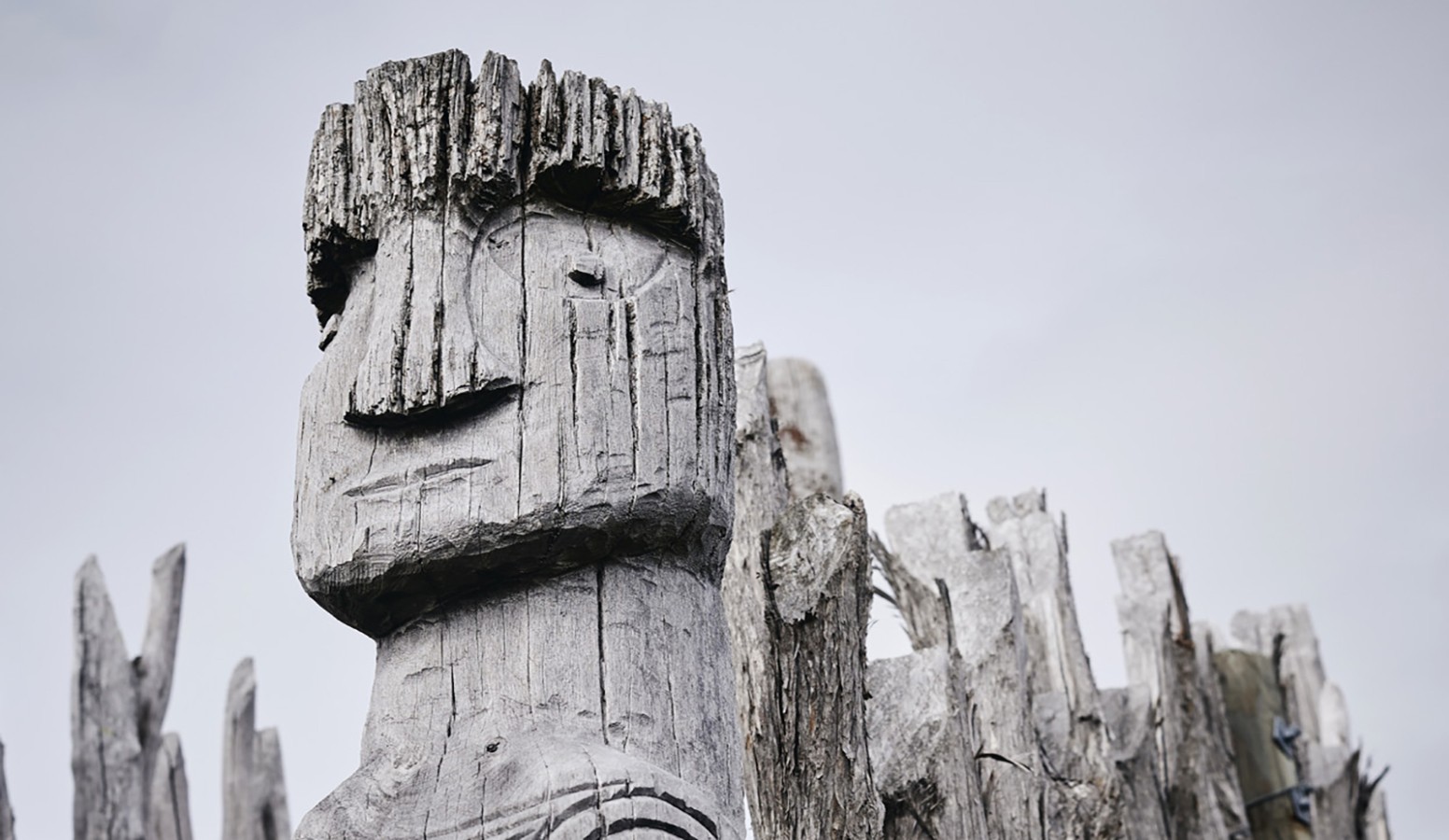 Exploring Hawke’s Bay Intrepid BayBuzz explorers, Bridget and Florence, set off on bikes recently along one of Hawke’s Bay’s cycle trails to track the Tutaekurī River up into the hills of Puketapu. 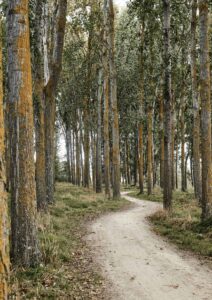 We start with coffee at the Box near the Clive BP, then head out along the river mouth, circling the salt-swept back of Hohepa farm and residential services (est. 1956), its award-winning cheesery, before crossing the Ngaruroro River as it empties into Waitangi Estuary.

From the busy highway, we spy a plain white stone that marks with approximation (“in this vicinity nearer the sea”) William Colenso’s doomed mission station (1844-1852). Beyond is the splendid Ātea-a-Rangi star compass, part of the newly enhanced Waitangi Regional Park and wetlands, with its ring of carved wooden pou and stone looking out across Hawke Bay, from the white cliffs of Cape Kidnappers to Matarouahou (Napier bluff, or Scinde Island as it was once known), and on a fine day beyond to Mahia Peninsula.

From this watery meeting point of rivers, we cross the Tutaekurī and head inland, flanked by the smoking stack of the Ravensdown fertiliser plant at Awatoto. It’s a gritty, atmospheric moment, as we pedal under the rumbling concrete bridge towards a wiremesh fence and the rear of the factory, and up beside steaming industrial mounds of BioRich compost, seagulls circling.

The sky is huge here and sitting low in the landscape there’s an expansive feeling of space – windswept grass, a far-off line of willows, and small in the distance the Kahuranaki range.

Bemused by a rectangle of neat bright green on the flats, we encounter the Awatato Flying Field for model aircraft. We meet cows on the stopbank and find the aesthetic in a line of thick dense poplar running parallel to the straight limestone path, power lines, and rows and rows of apple trees, stacks of apple bins. There’s a cidery smell to the air the further we ride towards Brookfields, where we discover the concrete pylons of the single-lane bridge are the canvas for vivid, unexpectedly luminous street art.

In 1862, the Hawke’s Bay Herald warned that the Tutaekurī “has become devious in its course… and that the cutting of a new and direct outlet is the only guarantee of safety to the agricultural flats of the neighbourhood.” By this they meant south Napier, where the river would often flood, for the lower Tutaekurī used to flow from Meeanee along Riverbend Road through present day Maraenui and Marewa into Te Whanganui-a-Orotū (the old inner harbour), not out to Awatoto at all. In 1936, post-quake, the river was redirected towards the Ngaruroro. 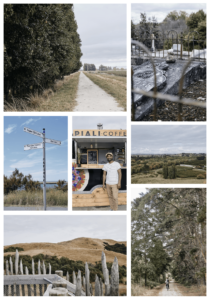 Trail between Awatoto and Brookfields Bridge; Puketapu cemetery; looking out towards Te Mata Peak from Otatara Pā; cycling the Puketapu loop; Otatara Pā Historic Reserve, one of NZ’s most impressive archaeological sites – in this view you can see the imprint of garden terraces in the hillside; the pop-up coffee bar outside Waiohiki Creative Arts Village; Waitangi Estuary.

From Brookfields we follow close to the river as we whizz along the back of Meeanee, under the Expressway, the edges of Taradale. Travelling up river, from the elevation of the stopbank, allows us to see familiar aspects from a whole different angle to the one usually travelled by road; it brings an exhilarating sense of freedom and a spatial, re-proportioning orientation to place.

At Otatara Pā, we walk up to take in one of the most spectacular panoramic views in Hawke’s Bay. From the palisade escarpment above the old quarry (yes, one of NZ’s most impressive archeological sites was quarried for roading last century before finding protection as an historic reserve in 1972), we can look back across from where we’ve come to the coastal horizon. Most of this land between Clive and Napier was once covered in a network of waterways and wetlands, lagoons and the great lake, Te Whanganui-a-Orotū.

One hundred years ago, EIT just down the hill (and in a former life, the Hawke’s Bay Polytechnic) was a place to gather shellfish. The 40-hectare reserve (which includes two pā, the visible remains of terraces, dwelling sites and kumara pits) is one of the largest and oldest pā sites in Hawke’s Bay (ca 1400-1820). Home to some 3-5,000 people in its heyday, it was of huge strategic and historic importance to Māori.

Back on the iWay we continue the Puketapu loop, one of Lonely Planet’s prettiest picks for cycling in NZ. From here all those apples give way to vineyards – tight rows banked up to the hills. While it’s still a smooth run, we are gently rising, and the hills are closing in. We cycle through mature stands of Douglas fir, eucalypt copses, banks of willow, a magical grove of silvery poplar. We stop to admire a giant gum.

In the tiny settlement of Puketapu the popular pub is closed, so we sit outside on a bench eating ice cream from the busy general store. There’s been a public house here on this site since 1885 – in the early days it was a major crossroads and important staging point for the stage and mail coaches, the horse and bullock trains, heading to Taihape, Rissington, Puketitiri, Taupō, Wairoa, Gisborne…

Turning on to Vicarage Road, we visit St Michael and All Angels – a colonial weatherboard church (built 1910) nestled picturesquely on the hill above a war memorial, with a dear little cemetery that includes old graves of sheep-farming pioneers, such as the Bicknells of ‘Willow Brook’ who settled in the area in 1856.

Crossing the narrow single-span suspension bridge and a favourite summer swimming spot, we turn back along the Oamaranui river side to peddle the 20km or so down to the sea and to Clive, with a short detour at Redclyffe Bridge, past Waiohiki Marae and the region’s oldest golf course (1896) to sample the brew from a new pop-up coffee bar outside Waiohiki Creative Arts Village.

We are home in time to pick up kids from school.