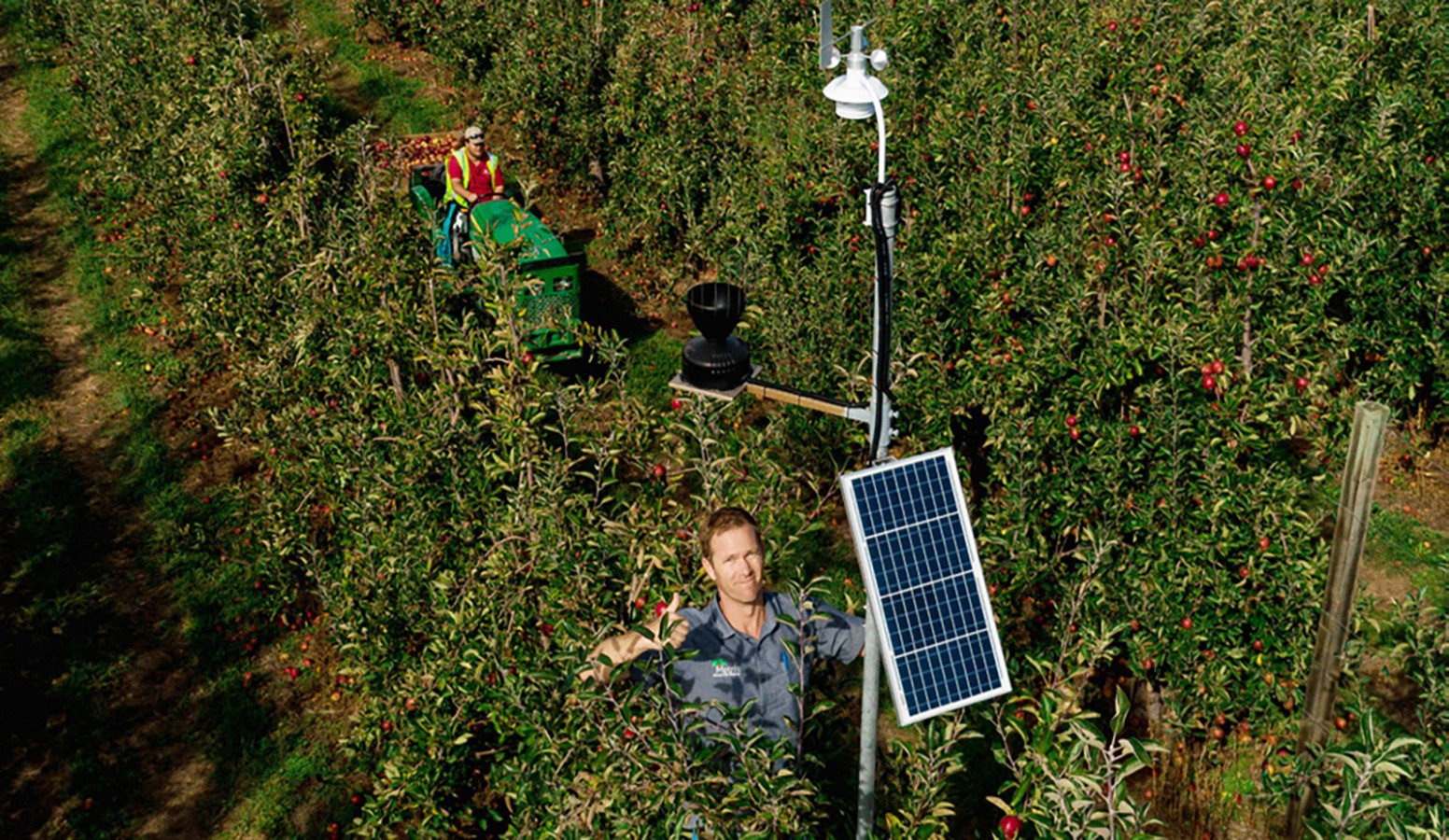 “The weather: everyone grumbles about it, but no-one does anything about it.”

Hawke’s Bay company Metris are doing something about it.

With a network of online sensors stretching from Pukekohe to Central Otago and a sophisticated cloud-based data centre, their revolutionary approach to weather monitoring has just landed them the innovation award at the 2019 Hawke’s Bay Primary Sector Awards.

I’m talking to Paul Heaps, Metris sales and service manager, who has the look of a teenager who has just been given the keys to the family BMW for the first time. Paul is extremely excited about what the future holds for Metris. Winning the award has been the most satisfying moment so far in a very hectic career, and opportunities are presenting themselves for the business at a rapid rate.

Predicting the weather can be a thankless task. Weather forecasting – especially predicting frost – is vitally important for farmers and growers, and extremely time-sensitive. They need accurate, up-to-the-minute information to make decisions about when to spray their crops, for crop thinning or to speed up fruit maturing, and in the case of serious diseases like apple scab, delaying spraying for more than a couple of hours can destroy entire orchards overnight.

Paul jokingly refers to himself and his friend Mark Bart as “Two punks from Te Awanga”.

Paul is an electrician and Mark has a Ph.D and a background in measurement science. Before they invested in Metris, their journey started when Paul casually asked Mark a question about temperature telemetry. The inevitable “Wouldn’t it be cool if… ?” discussion followed and their direction was set.

To support growers’ decision making, they have installed 130 sensor nodes across New Zealand. These are low-power units that run on narrow band Internet of Things (IoT) technology – meaning each sensor has its own unique connection to the Internet. Their sensors measure a set of environmental data, like temperature, rainfall, solar radiance, and leaf wetness. Apart from accurate weather data, these sensors are useful for all sorts of different applications, including disease modelling and frost alerting. They also have around 40 full weather stations, which are modem-driven 3G devices.

Long before Paul and Mark got involved, Metris was started by Hawke’s Bay meteorologist Howard Staines. Howard has been producing daily forecasts for more than twenty years and is a local legend for the accuracy of his reports. When he first started his forecasting business, Howard would send a painstakingly written report as a Word document sent by fax.

After 20 years, Metris now sends thousands of emails per week to thousands of subscribers, who pay to access the data on a subscription basis. Like a lot of technology companies, Paul and Mark thought about building a smartphone app, but wisely they decided that it would have slowed them down too much. Instead, they have concentrated on making their data available via an application programming interface (API). This is a lightweight, structured data format that can be read easily by machines, so the data can be incorporated easily into other devices and programs.

One of the problems Mark and Paul have run into is how to manage access to the Metris data. Their email sending software has shown that many of their customers share their data with a large number of non-subscribers. This is not malicious. Paul says it is simply because the data is so accurate and useful that their customers can’t wait to share it with their friends and colleagues.

As you would expect, theirs is a highly technical business. Maintaining networks spread across large areas can be a logistical nightmare and it’s impractical, if not impossible, to send technicians to check each sensor in a network that stretches from Pukekohe to Central Otago. For this reason, the sensors themselves need to be self-regulating, and the network uses specialised software so the sensors can monitor each other and detect problems. Metris have enlisted the help of a university researcher who specialises in network engineering to help with the arcane science around calibrating and diagnosing problems automatically.

The network of sensors, the software they have created, and their expertise allow Metris to offer “unparalleled weather insight”, but this is worthless if their customers don’t trust them. Paul says that Metris can show their customers concrete evidence of the success of spray forecasts. Success for their customers can mean saving money, protecting crops from hail damage and disease, or a reduced need for spray.

However, the most important benefit for their biggest customers is increased yield or packout rate. This is a measure of how many of the fruit are actually good enough to sell, which goes straight to the grower’s pocket.

The human factor is important when you see the international competitors that inhabit the weather forecasting business. Norwegian company YR is an example of a global weather network. While huge and well-resourced, their forecasts lack the specific details that make Metris’ information so compelling.

But big data is definitely changing the weather forecasting business. When Paul and Mark first met Howard, he was running the whole Metris forecasting operation from a private server in his basement.

Those days are long gone. Mark has set up a hosting environment at Amazon Web Services (AWS) and now it all runs in the cloud. Weather forecasting generates an enormous amount of data, and it takes serious computing resources to ‘crunch’ it. From taking eight hours each day, it now happens in only two hours, and this means Metris’ customers can get their accurate forecasts before 8am each day.

Despite the advanced technology and automation, the business of forecasting is still very much an activity for the human mind. The business is very reliant on Howard, although there is a succession plan being developed for if and when he decides he has had enough of the daily forecast.

There seem to be endless opportunities for Metris. Their sensor data is useful for a huge number of possible applications, and there is strong international interest. But the two punks from Te Awanga expect to stay in Hawke’s Bay for a while yet, and it feels like their journey is just beginning.