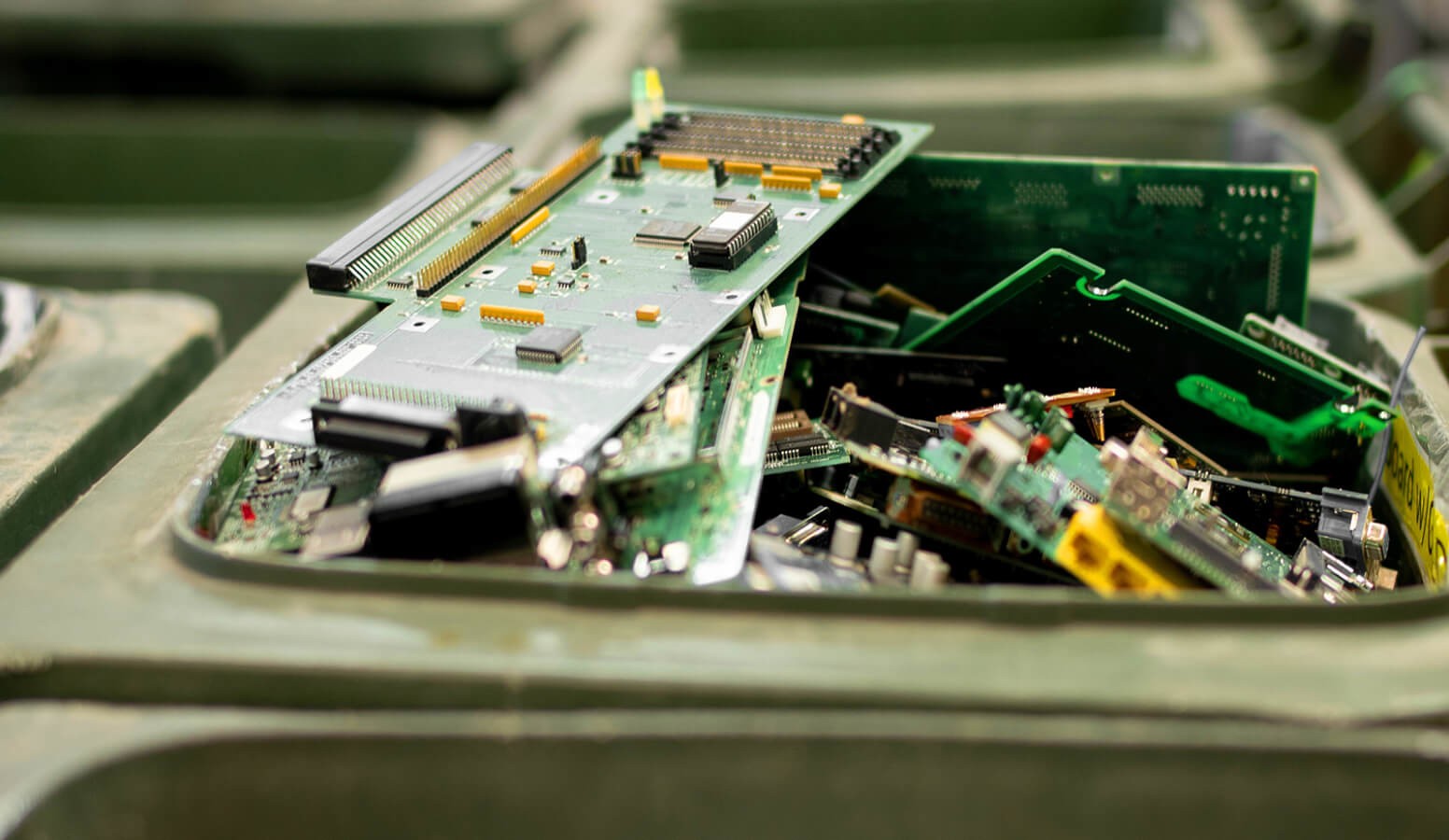 Built-in redundancy and incessant marketing pressure to upgrade to the latest phone, TV, computer device or printer have created a potentially toxic waste stream that is growing faster than any plan to cope with it.

Electronic waste (e-waste) is becoming one of the fastest growing categories of hazardous waste in the world, propelled by constant changes in technology, low initial cost and planned obsolescence.

Like plastics, which are going to the landfill at a greater rate than ever since street collection was limited to type 1 or 2, e-waste is increasingly being bulldozed into our landfills.

Most items contain steel, aluminium, brominated flame retardant (BFR) plastics and recoverable metals such as copper, tiny amounts of gold, and toxic materials like lead, phosphorus, mercury and cadmium which can leach into the soil and water.

The Napier-Hastings Joint Waste Management and Minimisation Plan 2018-2024 aims to remove about 50% of items going to landfills, including TVs, batteries, ‘end of life appliances’ and other electronic waste (anything with a cable or that holds data).

While it says these items “could easily be diverted elsewhere in the region”, recommending user-pays drop-off and recycling services “at transfer stations to cover shipping and dismantling costs”, this is mostly not happening.

A little over 18 months ago the United Nations Global E-waste Monitor 2017 report identified New Zealand as one of the world’s largest generators of electronic waste; the only OECD country without national regulations, collections and recycling schemes.

The Ministry for the Environment claims we each produce 19kg of e-waste a year — around 89 million kg for the country, expected to rise to 26.9kg per person by 2030. 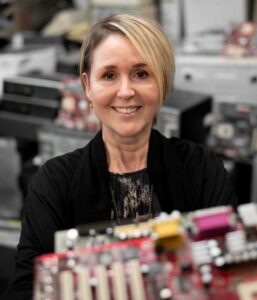 “This is bottom of the cliff stuff.
We really need to start talking about product stewardship and lifecycle.”
MARIELLE HARINGA, GENERAL MANAGER ENVIRONMENTCENTRE HB

Back in October and November 2012, Hastings District Council (HDC) used Ministry for the Environment funding to collect over 10,500 TVs.

Later it allocated $40,000 to collect TVs set aside by residents at the Henderson Rd Refuse Transfer Station. It cost $5,000 per container to ship them to Auckland for dismantling; when the budget ran out the TVs mostly ended up in the landfill.

Recently HDC has been referring ratepayers to the volunteer-operated Environment Centre Hawke’s Bay in Hastings. It charges $14-$19 for computer monitors, $5 for PCs and laptops, $13-$18 for printers and $12 for microwaves, stereos and vacuum cleaners. Batteries and old phones are free.

From April, HDC renewed its subsidy, so rather than paying $25-$35 to take old TVs, ratepayers could drop off up to three TVs for $5 each. In September or when the $30,000 budget is used up it’ll decide whether to carry on or channel that money into other waste streams.

When BayBuzz called, Environment Centre manager Marielle Haringa had a steady stream of ‘customers’ — “in the last six hours we’ve done a month’s worth of televisions”.

The previous day the centre had shipped out eight pallets to specialist recycler The Abilities Group in Auckland, which employs about 127 special needs people to dissemble flat screen and old pre-digital cathode ray tube (CRT) TVs.

Haringa says the only way the centre can make ends meet is to recover the charge per item and freight costs for each pallet that it has to pay.

A range of e-waste items are dismantled at the centre. Motherboards, hard drives, speakers, transformers, electric fans, steel, aluminium and extrusions are separated into various bins and sent to local businesses for recycling, although a percentage still goes offshore.

“We’re bursting at the seams. While our volunteers can do a lot locally, some of it’s too technical or has mercury or lead in it,” says Haringa.

HB Regional Council and Napier City refer people to the centre to dispose of their e-waste, although those drop offs aren’t subsidised. Napier hasn’t subsidised e-waste disposal since eDay drop off events stopped in 2010.

In 2016, according to the eDay New Zealand Trust, we purchased 750,000 new computers, 300,000 new TVs and 1.8 million smartphones. Despite their 6-7-years’ lifespan, the stats suggest TVs and computers are typically replaced every 4-5 years.

Zwimpfer has been involved in the IT and telecommunications industry for much of his life and remains frustrated that despite 15 years of lobbying for sustainable disposal of e-waste little progress has been made.

He was an initiator of the nationwide eDay collection in 2006 with support from the Computer Access New Zealand Trust (CANZ) to help reduce the potentially toxic effect on the environment when e-waste ends up in landfills.

By 2010 collection points had been established across the country so households, schools, small businesses and community organisations could drop off their old computer and communications equipment, including mobile phones, which were then recycled in an environmentally sound manner.

Zwimpfer claims over 3,300 tonnes of e-waste were diverted from landfills during that period. In 2010 alone 18,274 cars dropped off 869 tonnes at over 60 locations including in the Cook Islands.

The government pulled the funding plug in 2011 citing a preference for ‘everyday’ collection facilities rather than a one-day annual event.

While the eDay collections, the RCN e-Cycle scheme and the TV Takeback programme removed 800,000 electronic devices from landfills at a cost of $20 million ($25 per device), 10 million new computers and TVs were sold in New Zealand over the same period.

While local authorities and industry groups were supportive and wanted compulsory stewardship, the biggest obstacle was the failure of central government to follow through with a long-term plan or legislative support, says Zwimpfer.

He warns the problem will continue to escalate because collecting most e-waste doesn’t stack up as a business case. Printers, for example have little resale value, and the cost of dismantling e-appliances is so high the bulk still ends up in the landfill.

“It’s like tyres, batteries and chemical containers … if there was a good business model the problem, would go away.” 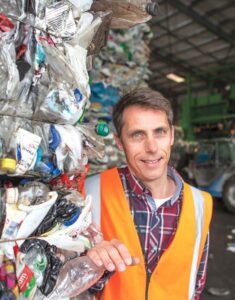 The only e-cycling scheme that has proven profitable is the Telecommunications Forum’s Re:Mobile alliance with Spark, Vodafone and 2degrees refurbishing old 2G and 3G type phones for reselling offshore. It’s so successful the profits go to Sustainable Coastlines.

While some councils put a portion of the Government’s Waste Levy Scheme into e-waste, Napier uses that to help with kerbside recycling; collecting waste paint and oil, batteries and whiteware at transfer stations, and for degassing fridges.

However, he says, there’s no point in ‘wish-cycling’ if no organisation or business is willing to take products.

Based on joint council three-yearly kerbside rubbish analysis, Thew reckons e-waste is not such a big deal.

During the first part of the Solid Waste Analysis Protocol (SWAP) sample, “two phones, a toastie pie maker and fewer than 100 batteries from 210 bins and bags” were collected.

He estimates e-waste makes up less than one percent of kerbside rubbish, but might change his tune when the transfer station analysis is completed. Printers, old radios and larger items aren’t generally put in our orange bags.

Although e-waste is only a part of the overall recycling mandate of the Environment Centre Hawke’s Bay, Marielle Haringa is passionate about capturing as much of our electronic detritus as possible before it reaches the landfill.

In September last year the Centre moved from a house and small shed to new premises at 1004 Karamu Rd Hastings with “a huge shed” and eight workstations so it can operate 20 hours a week. Already “the place is full”, she says.

The Centre also runs workshops where they recycle a range of products including batteries, printer cartridges, phones and some plastics at no charge. A new service is planned to refurbish and certify electronic goods fit for resale.

“This is bottom of the cliff stuff. We really need to start talking about product stewardship and lifecycles,” says Haringa, who also chairs Environment Hubs Aotearoa.

She believes product lifecycles are way too short and we need a “behaviour change” from our consumer mentality so we stop being a ready market for cheap products.

In addition, e-waste managers are discussing whether importers of electronic goods should have to prove there is an end of life strategy before they are allowed to sell products here.

The Trust in its 2017 manifesto lists eight surveys and reports since 2006 in which “successive governments have appeared reluctant to act”.

Ideally it wants e-waste banned from landfills. Some local authorities are already considering this, largely because most people would rather pay less than $2 for old TVs and computers over the weighbridge than fork out $20 to drop them off for recycling.

He believes $30 per item purchased should be embedded upfront and passed on to recyclers as part of a national e-waste stewardship framework with a robust regulatory environment to ensure everyone participates.

Where does buck stop?

Napier waste manager Rhett van Veldhuizen agrees a disposal levy would go a long way to solving the problem and placing responsibility back on consumers.

He is adamant councils shouldn’t have to make waste management decisions on their own and the government should prioritise e-waste and enforce stewardship “to take the weight off the shoulders of local government”.

Rigid regulations might also prevent a re-run of past efforts that saw ‘disposal’ contractors taking the money, collecting old TVs and computers, extracting the valuable bits and dumping the rest or going broke and leaving behind an e-waste mountain. 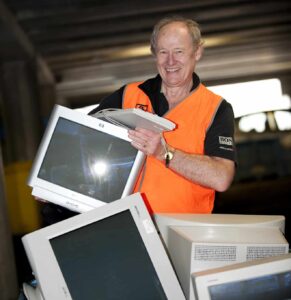 eDay organiser Laurence Zwimpfer with some e-waste dropped off at Westpac
Stadium in Wellington for eDay. Photo: Mike Heydon

While New Zealand has a standard for refurbishing e-waste, it’s expensive to comply with and audit, and it isn’t enforced. Zwimpfer knows of only one company that’s completed the process.

Obstacles include strict rules from pick-up to disposal, health and safety issues, the need for substantial facilities and the fact Sheltered Workshops, which used to dismantle electronic items for recycling, now mostly have to pay minimum wages.

Zwimpfer says the WasteMINZ industry advisory group he serves on is looking to pick up a 2008 draft scheme for mandatory e-waste stewardship.

“Hewlett Packard, IBM and others do this in other countries and were happy to do it in New Zealand if they were required to and parallel importers contributed to the cost of disposal.”

While associate environment minister Eugenie Sage has been talking about mandatory stewardship schemes for over 18 months, Zwimpfer is concerned she won’t be given the resources to follow through and e-waste will remain low priority.

He says the Government can no longer afford to leave the matter in the hands of local authorities, industry associations and “enthusiastic flag wavers” like himself. More “institutional energy” is needed to curb what he claims has been a crisis situation since 2006.

“What sort of heritage are we leaving for future generations, burying all this toxic material that is leaching into the land like little time bombs.”

Embed the price in the cost of purchase; make it the same for everyone “and the problem will go away.”

What’s needed, says Environment Centre HB manager Marielle Haringa, is a collective change of thinking, for more people to take responsibility for the impact of their behaviour on the wider environment. She quotes from a poster on the wall of her office: “‘It’s only one straw’ said billions of people”.