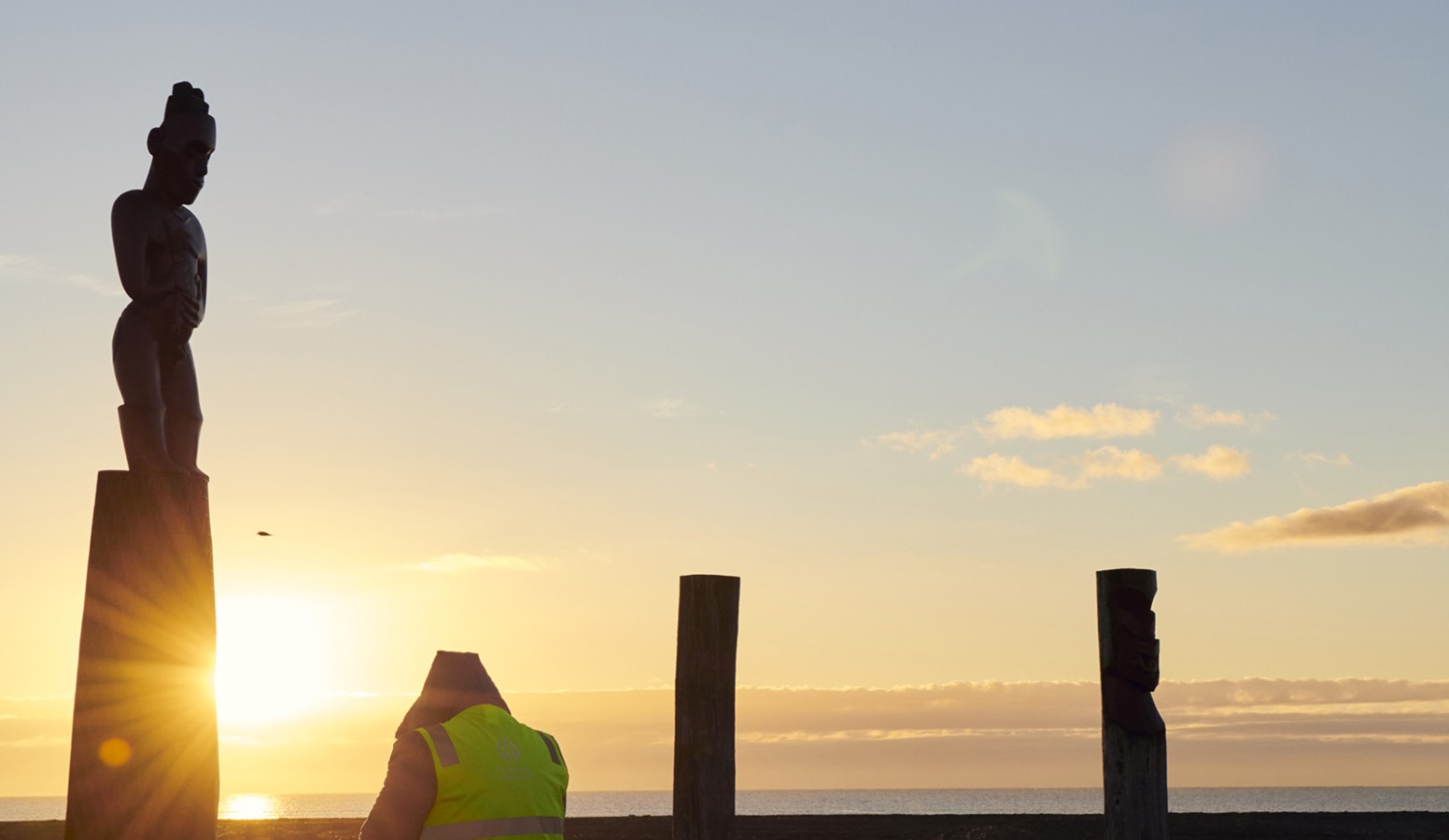 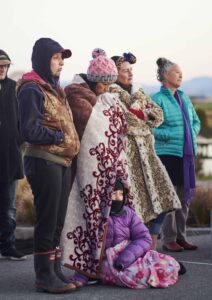 Over June, Bridget and Florence explored Matariki – the constellation of stars that mark an important period in the Māori lunar calendar (and for many cultures around the world). Here they head down to the Matariki winter solstice at Waitangi, Clive, for the traditional celebrations of the Māori new year.

It’s a good, hard frost on the dawn of the winter solstice. It’s still night-dark when we crunch out to the car, throw a pot of warm water across the iced-up windshield. The cold clean brightness of stars scattered over our heads, the moon, not a week post-full, to the west.

We witness the stonewash softening of blackness, the edges of the horizon turning green. The stirring of birds.

At Waitangi Regional Park, there’s a line of parked cars. Dark, shadowy figures gathering at the archway to Ātea-a-Rangi, the star compass, which sits out on the gravel spit above the estuary. Groups of people huddle together in blankets. Sipping tea. Waiting. Watching as the firmament lifts across the ocean, turning pink around Cape Kidnappers, drifts of mist across the river.

The constellation Matariki (Pleiades) can be seen just above the northeastern horizon before dawn from mid-June, not far from Tautoru (Orion’s Belt) which rises at due East.

On the solstice, the sun, which has been moving north since autumn, will rise where Matariki does – the stars appearing to hook the sun itself out of the ocean – before drawing back to the south.

We glimpse the first faint rays of the sun, ‘the ropes of Maui’, and with an opening karakia, kaumatua together with traditional navigator Piripi Smith (of Ātea-a-Rangi Educational Trust) lead the procession of people, acknowledging all those who’ve gone before, in a spiral walk towards the solstice stone.

Within the circle of Ātea-a-Rangi, we are given orientation by the pou that mark the 32 houses and cardinal directions of the Māori/Pacific compass – the navigational tool by which Polynesian seafarers traversed the oceans, and by which they passed on their knowledge.

We are shown where the waka of Tamarereti stretches across the heavens at this time of year – its prow to the west (the constellation Scorpio), captained by the star Atutahi (Canopus); the splashes of water left in its wake (the Milky Way); the stern of the waka Tautoru (Orion’s Belt). In this aspect, Matariki lies in the wake of the great waka of Tamarereti.

Other areas of Aotearoa see Matariki as part of another waka, captained by Taramainuku – his net gathers up the spirits of the newly dead to carry them to the underworld. When the constellation rises again in a year, the spirits of the dead are released into the sky as stars.

Matariki is a time of farewelling those who have passed, of grieving their loss, and of gathering together to share food, stories, learnings while looking to the year ahead. The stars, in their varying visibility to the naked eye, were traditionally an indication for the coming season – and drawn on to plan for cultivation and the gathering of kai.

Matariki, the central star (Alcyone, in the Greek Pleiades), is the celestial mother, surrounded by her six children, each guardian for a respective element and realm of nourishment. Set apart for their tapu status, other areas of Aotearoa also have Hinewaiterangi (Celaeno), the potiki, last born, to whom you send your wishes, and Pohūtukawa (Asterope) – the star that holds watch over the dead.

Waiting for a sunrise is a patient, elastic process. The gradual lightening of sky occurs long before the sun itself emerges. In this liminal space between night and day, dark and light, between death and life itself, there’s sharing of stories, interpretations, the aspects that resonate with lived experiences.

We hear how, for some iwi, Pohūtukawa embodies a struggle for your soul, the tension between Tū and Rongo – the more individualistic strength of standing up, contesting, and the power of peace and community.

We also hear what’s happening at this time of year in the bush, and in the gardens (the lettuces are thriving, there are still tomato flowers – things are out of kilter with global warming); of the community tree-planting that took place here last week (3,000 planted in an hour) and the new 15-hectare wetlands. We receive advice on how to conserve our energy and look after ourselves, the rongoa (medicinal plants) to draw on. Keep together, hold close to your loved ones, is the message.

As the sky lightens, the temperature plummets. It’s a cold that seeps into your bones, lays insistent claim to every part of your body. There’s a strange sense of doubt, as if maybe the sun this time won’t rise at all.

But when the sun finally crowns above the water, over the rim of cloud, it’s a moment so luminous, pure, so spontaneously joyous, as if looking into the molten gold heart of being.

Immediately, as the sun climbs into the sky, too bright now to look at, the world changes – there’s warmth, but also definition – things take on their shape, there’s a fixing into place and purpose. Quickening animation.

We turn to greet each other, move off, disperse.

Along the Ahuriri water front, the ocean swimmers are taking their morning dip. A woman peels off her wetsuit, breathless, lifting her arms up to the sun. Cafes clatter their tables and cups. It’s 8am and the shortest day in the year has begun.