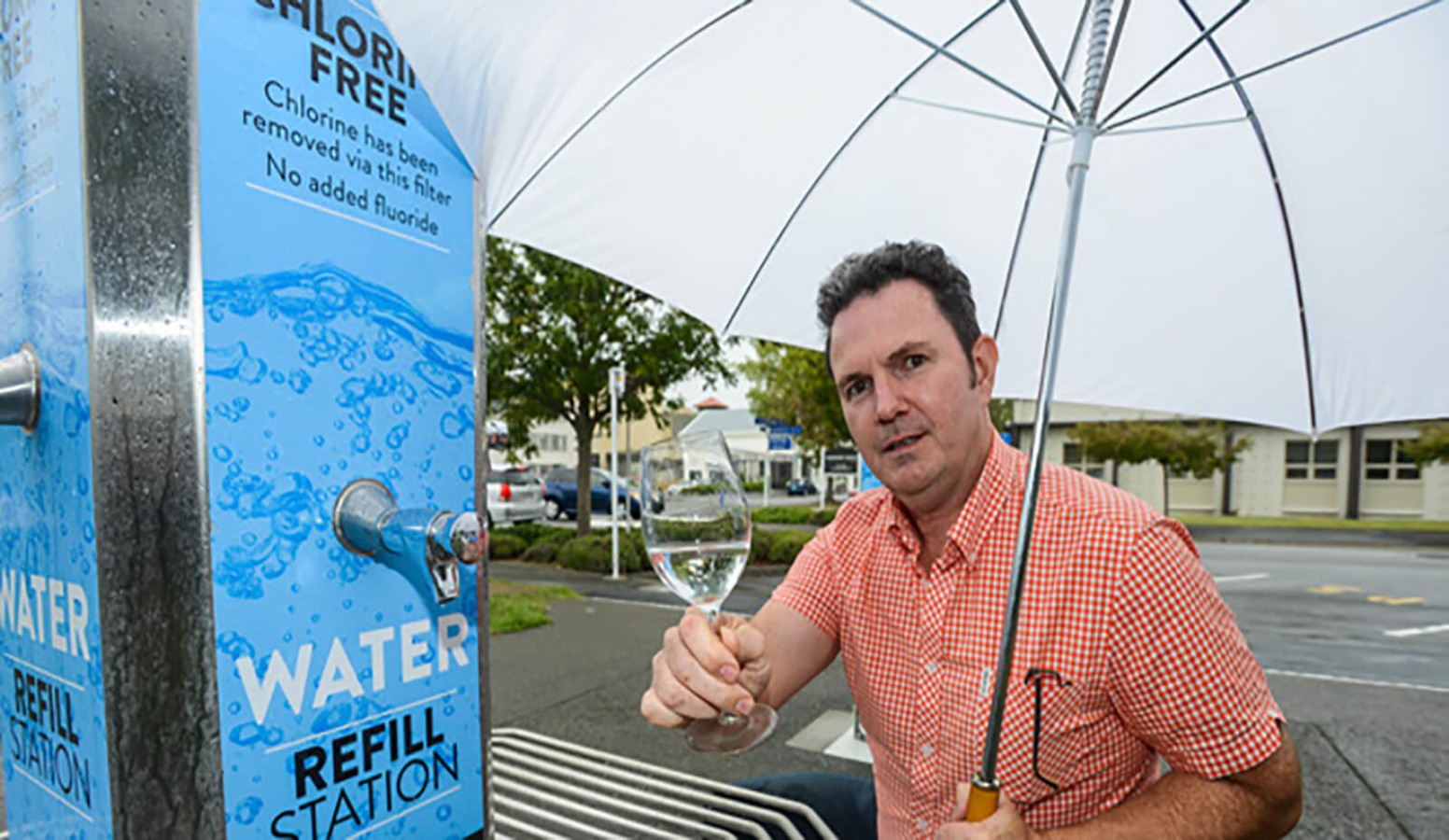 Outside of the mayoral contests, the local body elections look like a bit of a yawn to many.

My now constantly groaning, rumbling, pulsating and still traumatised digestive tract reminds me daily of the big issue at hand. It was water last time and it’s water this time.

For many years I got to drink the best tap water in New Zealand while ribbing my friends further north about their murky, chlorinated Waikato river water. Now our water is vile and seemingly more chlorinated than that in other centres.

Strangely the mood is reticent in the Hastings District, where the 2016 gastro event poisoned me and 5,000 other Havelock North residents. Conversely, there is more than a murmur of discontent amongst Napier residents and the Napier City Council. In June this year the NCC voted to make water the council’s number one priority and they’ve allocated $200,000 for a feasibility study to remove chlorine from the water supply.

Chlorine apologists claim the chlorination of water is international best practice, perfectly safe and those that don’t like it should install water filters in their homes. There are several problems with this argument, most importantly that chlorine is not ‘perfectly safe’.

Chlorination of water became standard practice in most western countries in the early part of the 20th century. The early tests for safety were typical two-year studies on rats and while researchers noted a raft of minor physiological impacts, mortality rates were not significantly affected and a ‘safe’ level of chlorine was established for human drinking water.

The problem is that many of the diseases that are fatal to humans take decades to manifest themselves. Only large-scale studies of populations over lengthy time frames give us an insight into the potential impacts of chlorinated water. As far back as the 1970s scientists started to become concerned. They discovered disinfestation biproducts (DBPs) which result from the reaction between chlorine and small amounts of organic matter in the water. The most concerning of these are trihalomethanes (THMs) which have subsequently been shown to be carcinogenic.

The prevailing medical opinion is that chlorinated water is still fairly safe and certainly safer than blindly drinking untreated water. Despite these assurances water providers are more commonly implementing supplementary disinfestation systems such as UV and ozone.

That position may change in time as researchers focus on other areas, such as the effects of chlorinated water on the gut microbiome, that vast collection of mostly bacteria and fungi that populate our digestive tracts. In recent years, deficiencies in gut bacteria have been linked to virtually every medical condition you can think of. Not just big names like cancer and heart disease, but also a collection of seemingly unrelated issues such as asthma, dermatitis, Alzheimer’s, Parkinson’s, multiple sclerosis and childhood obesity.

Strangest of all is the relationship between the microbiome and the brain. Your gut produces metabolites that influence cognitive function and behaviour and this is no subtle impact.

Researchers have now demonstrated that patients with schizophrenia or depression are commonly missing some key bacterial species or have less diversity in their gut bacteria.

What is clear already is that the microbiome is not as populous or species-diverse in populations that drink chlorinated water. The chlorine probably doesn’t affect your microbiome directly as stomach acid itself is highly chlorinated and composed of hydrochloric acid, sodium, and potassium chloride. Again it’s likely the DBPs have the harmful effects.

One of the greatest concerns researchers have is for childrens developing microbiome in the first three years. As it is with many other components of human development, the health of the microbiome is laid down in the early years and evidence is rapidly accumulating that gut dysbiosis is linked to negative childhood developmental outcomes and probably a greater risk of chronic disease later in life. This is one reason infant feeding guidelines recommend boiling and cooling tap water for infant consumption, including water used in infant formula preparation.

The instillation of household filters could provide a solution to all these potential problems but filters are likely to be less available to renters or those in lower socio-economic groups. This is the great flaw in the ‘get a filter’ argument as it is likely to perpetuate the negative health outcomes which these groups already experience.

It’s quite easy to find reasons to criticise chlorinated water, but it has probably saved millions of lives over a century where there was no reliable alternative. But increasingly there are alternatives.

The Netherlands, Switzerland and Germany have all moved towards water delivery systems without residual disinfectants like chlorine reaching consumers taps. These systems require more comprehensive management programmes and potentially intermittent flushing of the network. To date there is no data to suggest that this alternative approach is any riskier.

In several North American cities, like Las Vegas, the usually harmless ozone has replaced chlorine. Here in Christchurch they are working towards being solely reliant on UV treatment as a chlorine alternative. Still, other countries, such as the UK, have slammed the door on alternative treatment methodologies and mandated chlorination.

In Hawke’s Bay we have a significant advantage in that our water supply is secure. Thousands of households drink from private rural bores with seemingly no issues. At my work we have undertaken about 300 well tests over 15 years and never found an issue. This means our water risk is confined to the management of the well heads and the distribution network. Intermittent flushing of chlorine though the systems may be adequate and quite possibly the cheapest solution.

Worryingly this government is about to appoint a Wellington-based ‘Water Tsar’ who will have the ultimate power over drinking water nationally. We could be faced with a situation like that in the UK, where chlorination is mandatory. For larger regions with sufficient technical capacity, the appointment of a centralised authority is a retrograde step. ‘Skin in the game’ is a powerful motivator and a Wellington bureaucrat with an army of PR advisors doesn’t have much.

I really liked that the mayor and CEO were forced to confront the victims of the gastro crisis and visit those whose loved ones very probably died because of it. I’m inclined to have greater trust in people who are part of my community and accountable to it.

I don’t like being a single issue voter, but that’s how I see it this time. The supply of safe water is the most important service that local bodies provide. I don’t care about the council’s new sculpture, their improved green spaces or their regional economic development ambitions.

All I want is the best advice and the best technology that’s out there, delivering me safe, clean drinking water that is free of chlorine. If councillors don’t take a bold stand on this issue they won’t get my vote and perhaps they shouldn’t get yours either.