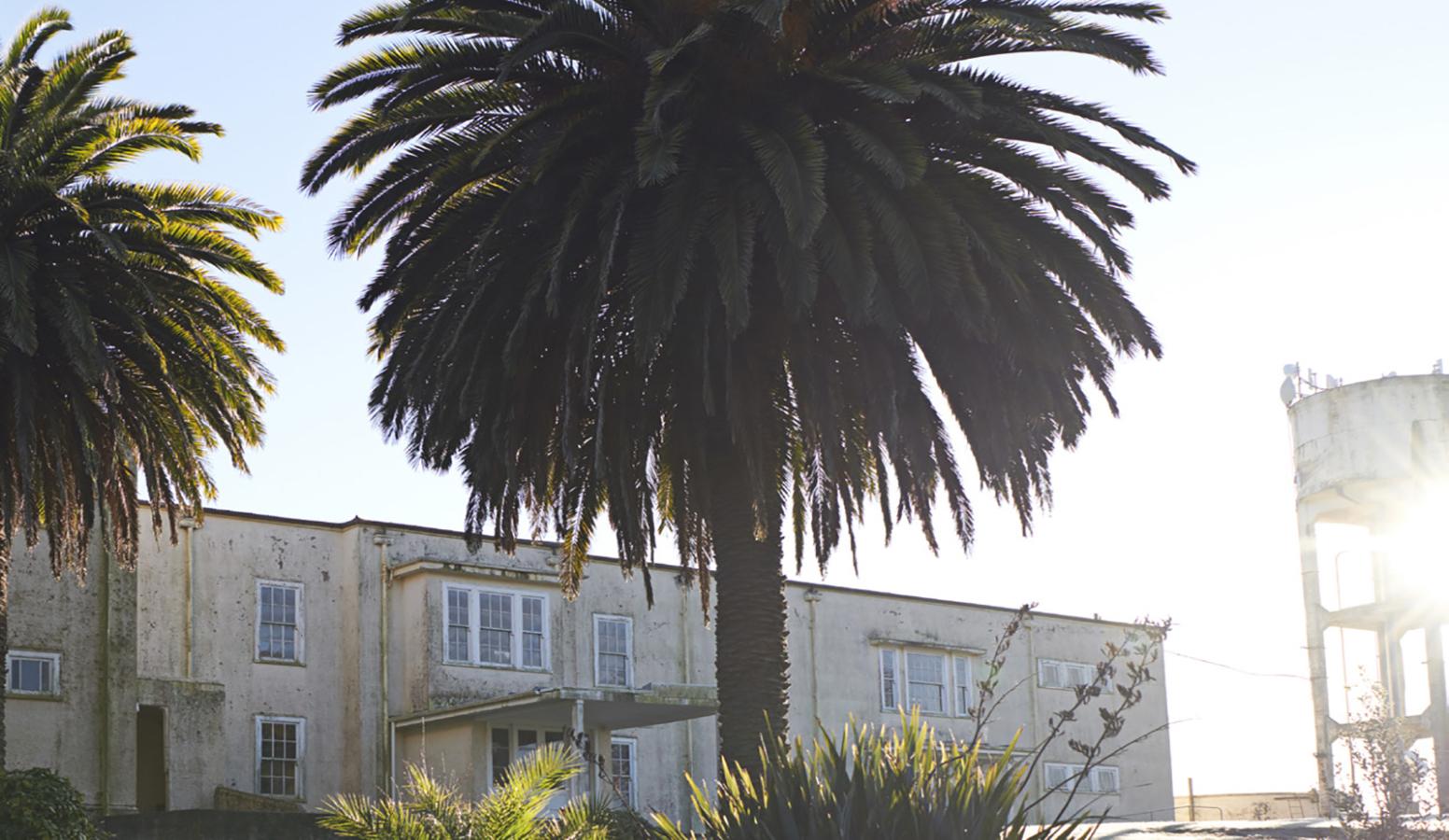 Driving along SH2 between Waipukurau and Takapau there’s a ridge that rises dramatically from the Tukituki River flats. And perched on the escarpment, at 200m altitude, is Pukeora Estate.

Many will tell you with Brontë-esque intimations that this was once a mental asylum. And while this isn’t quite true, we discover, it’s hard to dispel when your first impression on a clean, frosty morning is of walking into a Hitchcock film – flocks of birds take to the air from where they were perched on the square-topped roof of a somewhat ominous stucco building.

It’s worth the early morning drive through rolling fog just for the views at Pukeora Lookout, though – CHB’s preeminent ‘selfie location’, which looks out over the Waipukurau and Waipawa townships, their rivers and surrounding farmlands, across to the snow-capped Ruahine Ranges. Through the mist and trees, a raised water tank appears like a castle turret above the imposing east wing of the sanitorium. It has all the hallmarks of a medieval burg overlooking the Rhine in middle Europe, replete with vineyards.

These views once ‘belonged’ to T. Purvis Russell, part of his Hatuma station, ‘Woburn’. Russell was one of HB’s early pastoral squatters, who took up the illegal lease of land from Māori to farm merino sheep before purchasing it in 1852. An absentee landlord for 20 years when he retired to Scotland, Russell’s huge landholdings were forcibly reduced under the 1891 Lands for Settlement Act, with 54 farm units from the so-called Hatuma block balloted in 1901, including Pukeora.

The name Pukeora (‘hill of health’) was coined, it seems, when a sanitorium was constructed here in 1918 to treat WWI soldiers suffering respiratory illnesses, especially mustard-gas injuries. In the 1920s, under the governance of the Waipawa Hospital Board, Pukeora became a tuberculosis sanitorium, treating 7,000 patients over the following 37 years, some of whom – such as Bertha Gadd, aged 25, of Hastings – also died there.

Treatment in those days was primarily lots of fresh air – hence the wide verandahs (still seen at the present-day wine-tasting rooms) and open shacks.

and disabled. The wisdom of the day was that institutional care was in the best interests of the person and their families. As those views shifted in the 1970s towards community-based care, Pukeora turned its focus to caring for head-injury patients. In 1998 it closed its doors and was put on the private market.

Since 2000 it’s been a winery, and wedding and function venue, and site for the last 20 years of the annual CHB arts and craft market.

Visitors will be relieved (or disappointed) to know, that a thorough overnight investigation by Core Paranormal in 2010 using digital camcorders and electromagnetic field meters (the tool of choice for ghost hunters) found no evidence of ‘ethereal beings’, contrary to the ‘feelings’ and interpretations occasionally reported to the estate owners.

We, however, find ghosts aplenty in window reflections and crumbling plaster, in the green moss growing on stone, the broken fire-escape, glimpses through cobwebbed glass of rose-print carpet and dusty banisters in the abandoned nurses’ quarters. In the squat brick hospital wings: low vinyl corridors, wire coat hangers in open wardrobes, stacks of orange plastic chairs.

It’s a deliciously spooky place to explore, with its layers of history and period architecture spanning a century of institutional care and societal views on disability and rehabilitation, coupled with romantic, million-dollar, panoramic views and 100-year-old gum trees.

While I unearth nothing that backs the sinister Cherry Farm vision that lives on in the public imagination, Pukeora was an institution in the years of state care (1950s-1990s) that have been exposed by the Human Rights Commission as systemically abusive. There are gaps in the record that hang in the air.

Pukeora Forest of Memory, an arboretum established in 1993 by the local Rotary Club with well-cut tracks designed for meandering, is nestled in at the base of the hill, off Pukeora Scenic Rd. It holds an eclectic assortment of exotic and native trees – totara and ti kouka paired with silver birch, oak, alders, sequoia – in early spring, the undergrowth a prefusion of daffodils, snowdrops, forget-me-nots, magenta rhododendron, red kaka beak.

Tucked in under trees, between flowers, beside pathways are personal, family memorials to those passed: stone cairns, beds of succulents, wooden seats, windchimes in branches, small figurines. In the mid-morning light when the August frost has lifted and we’ve thawed ourselves with hot coffee from The Rookery at Waipuk junction, the Forest of Memory is an enchanting walk.

Somewhere around here at the foot of ‘Sanitorium Hill’, I read in a 1951 history of the area, are the earthworks and garden terraces of an ancient pā. At the close of the 19th century the river flats in front, now fenced for winter grazing, were still covered in hundreds of old kōwhai trees. 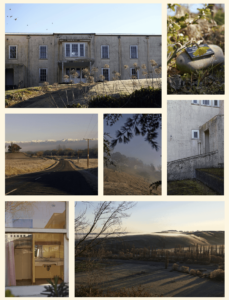 CLOCKWISE FROM TOP: Pukeora Estate has had many incarnations – it was originally built as a sanitorium for WWI soldiers; Pukeora Forest of Memory; the abandoned nurses’ quarters; views across the Tukituki River on a frosty winter morning; reflections of the original stucco building in the window of the 1950s hospital wing; views to the Ruahine Ranges from Pukeora Scenic Road; the old sanitorium viewed from Pukeora Lookout.