In August the Government announced an overdue healthcare ‘gift’ for Hawke’s Bay. As part of a larger purchase, a new Linear Accelerator (LINAC) machine would be provided for Hawke’s Bay, enabling radiation treatment for cancer here within the region.

This new service won’t actually arrive for awhile (it’s scheduled for 2020/21 financial year), as the first new machines will go, as usual, to Auckland, Canterbury, Capital and Coast and MidCentral DHBs.

In addition, an expensive protective bunker must be built to house the machine, and those funds are not provided as part of the announcement.

Still, assuming the funding is indeed behind the curtain somewhere, this is excellent news for cancer patients in Hawke’s Bay, who otherwise historically have had to travel out of the region for radiation treatment. For example, 417 HB patients travelled to Palmerston North for radiation therapy in 2018, many with significant hardship.

Depending on distance travelled and number of treatments, the government offers some travel assistance, and accommodation help can be sought from the Cancer Society. Supportive, but these are only band aids.

Cancer in its various forms is the leading cause of death in New Zealand, accounting for about 30% of all deaths each year.

The number of people affected by cancer is expected to increase by 50% by 2035. Only Australia has a higher rate of cancer (743 new cases per 100,000 population in 2016) than New Zealand (at 543 cases). Prostrate and breast cancers are the most prevalent form, but lung cancer is the deadliest, accounting for one in five deaths. This chart places top cancer deaths by type against other causes.

Here in Hawke’s Bay, 979 new cancer ‘registrations’ presented in 2016 (24,086 nationally). Here are the registrations for some most-occurring cancers: 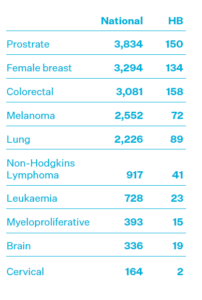 Radiation treatment works essentially by disrupting the DNA of cancer cells, killing them or slowing their growth, thereby reducing or eliminating tumours (but treatment can also damage surrounding healthy tissue). Radiation is generally part of the regime for treating cancers involving the head and neck, breast, lung, cervix, prostate and eye.

The Government says that while one in two people with cancer could benefit from radiation treatment, in NZ only one in three are currently accessing these services. 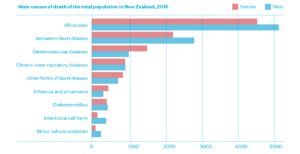 Radiation treatment can require up to eight weeks of recurring sessions, obviously placing enormous burden, disruption and stress on families whose patients and care-givers must shift away from home under circumstances that are already by definition traumatic.

Clark added: “We know for some lung cancers, newer technology can reduce treatment times from as much as six weeks to as little as three days. It can also mean improved life expectancy when every day is precious.”

MP Lawrence Yule supports the provision of a LINAC for Hawke’s Bay, but terms the Government’s announcement “underwhelming”. Commenting to BayBuzz:

“I am very supportive of Hawke’s Bay getting a Linear Accelerator to provide radiation treatment for cancer patients in Hawke’s Bay. I accept that travelling to Palmerston North is not ideal and for some it has meant they have not pursued treatment.

“What is underwhelming though is the recent announcement by Minister David Clark that replacement linear accelerators were being purchased. Underwhelming because this has been a position worked on by the DHB and Mid Central Health over the past 12 months without any announcement. Mid Central Health has been working for some time to place one of its four machines in Hawke’s Bay and one in Taranaki.

“Equally one of the biggest costs in a radiation machine is the bunker required to safely house such a machine. Each bunker will cost around $5 million to build and, based on demand, a second bunker will be required by 2024. There is no announced funding for this and the DHB will have to reprioritise its plan to accommodate this. Surely if the Government was serious in this regard it would have also confirmed such extra funding.”

Access to new cancer drugs not presently provided by Pharmac is another, often emotional issue. National has supported committing an extra $200 million for new cancer drugs and a nationwide Cancer Plan.

Says Yule, “In my two years as an MP I have not had anyone contacting me about lack of radiation services, but a number have told me of heart-breaking stories about funding new cancer drugs from precious family resources. A new radiation machine in Hawke’s Bay is great, but some actually need access to life-saving drugs.”

Yule is backed up by a report from pharmaceutical lobby group Medicines New Zealand, noting that of 70 new cancer drugs publicly funded across 20 OECD countries between 2011-2017, NZ funded only six (Australia, 26).

What else might be done to improve cancer treatment here in the region? Rumour has it that privately-provided radiation treatment is on the horizon, with land for an appropriate facility having been purchased in Hastings. Maybe HB’s LINAC will land there. Presently, private facilities provide radiation treatment only in Auckland and Christchurch, and more recently in Wellington at the Bowen Icon Cancer Centre (part of the Acurity Group).

A Raw Deal for Raw Milk?

Seven agents quickly alighted, three of the burliest secured the immediate perimeter while four inspectors, on presenting a search warrant…