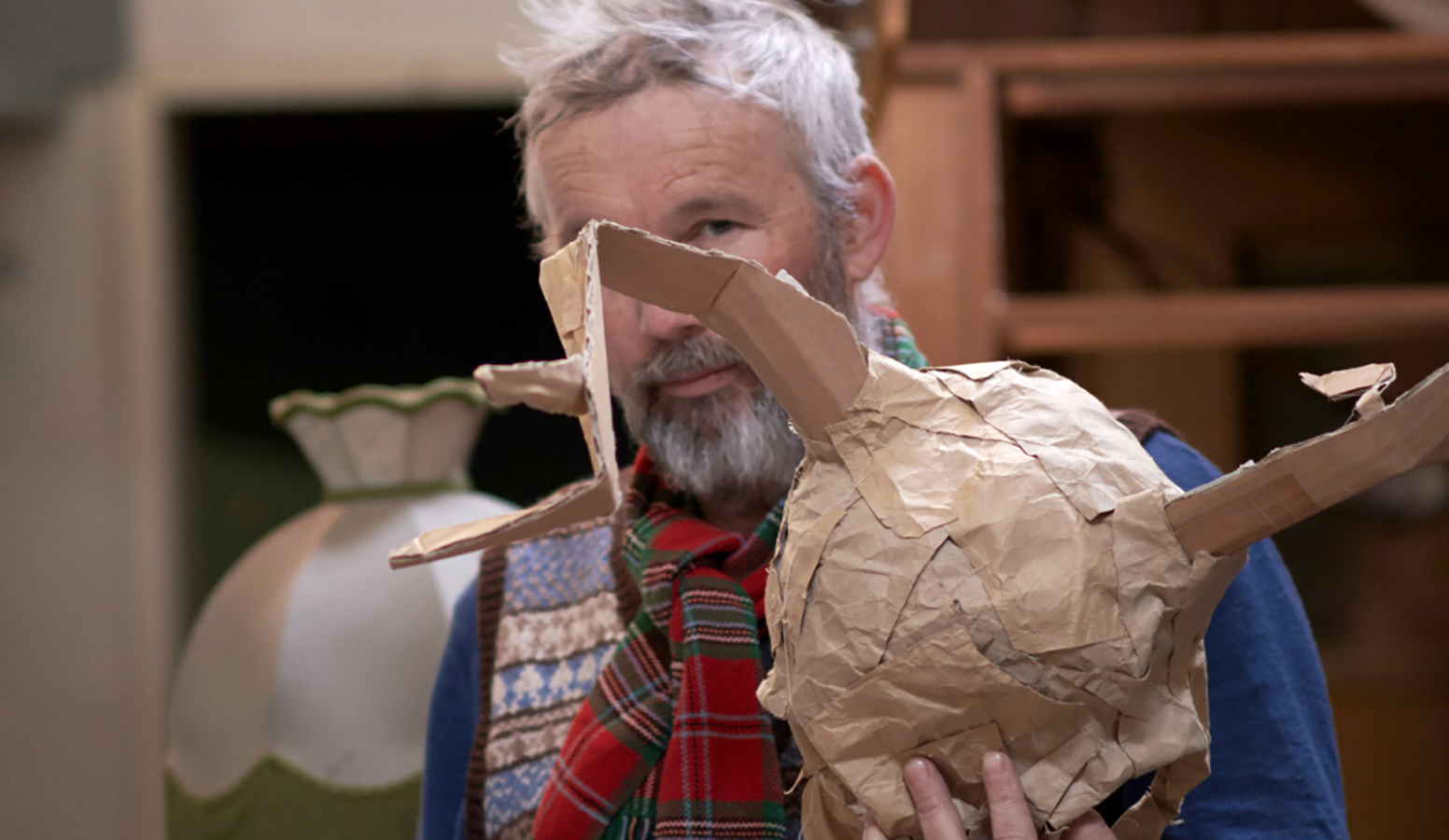 The Art of Taking Part

Welcome to Hastings’ so-called ‘Cultural Precinct’ – a rough rectangle delineated by Parlour Projects and Hastings City Art Gallery, Arts Inc, Humanity Books and pretty much every business with ‘200- something Heretaunga Street’ in its address.

Here you’ll find art and artists sharing ideas over coffee and chocolate, croissants and craft beer, as they go about their daily business. Making and doing, moving and shaking, creating opportunity for others to show work, or actively encouraging art consumers to become art participants and make their own.

Little Red Bookshop owner, Adrian Thornton, is a grassroots artist with a mission.

Frustrated by what he viewed as an elitist fine art establishment with little connection to ordinary folk, Adrian embarked some years ago on a collaborative campaign of disruptive artistic endeavor, designed to shake the masses out of their consumption-induced stupor. “The system is what we’re fighting; it doesn’t work for humans. It’s an ideology of self in the short term rather than community in the long term,” he explains. “You need to put people before profit.”

Adrian also heads the Revolutionary Arts Ensemble (based in the Heretaunga 200 block), which, inspired by the Russian avant-garde, cross-fertilises free jazz, animation, costumes, sets and a sprinkling of strange with an explicit mandate to “make crazy shit happen”. Adrian credits its success to the willingness of talented local creatives to come together and experiment. “It’s always completely organic,” he says. “I just throw a concept into this group and don’t get attached to anything and it comes out the other side as something else.”

The Ensemble balances artistic freedom with audience engagement, breaking down barriers with immersive staging, props, and a generous splash of humour. Adrian in a Godzilla suit raining a cardboard city down on delighted children who enthusiastically take up the mantle and effectively trash the place, with his blessing. A giant fan animates hanging plush letters and costumes alike to quite literally blow the audience’s minds.

Adrian explains his modus operandi for involving people in his work thus: “You’ve got to make people feel they’re a part of what you’re doing before you freak them out too much. You give them a hook, I’m very low brow when it comes to hooks.” 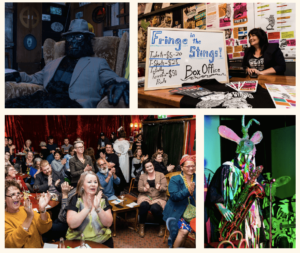 Hannah Clarke cut her theatrical teeth overseas and in the capital, making and sharing edgy works that connect.

As director of the New Zealand Fringe she was well poised to come in at the ground level of Hastings’ grassroots festival, Fringe in the ‘Stings (FiTS), which takes place each October (now in its fourth year). She’s observed a cultural renewal that makes her proud to invite professional colleagues to perform in her home town. “We were seeing this revitalisation around the Heretaunga Street area and we really wanted to celebrate this and encourage participation in the arts.”

Accessibility permeates FiTS’ kaupapa. The open-access model is borrowed from Edinburgh, whose Fringe was established alongside the curated International Festival post World War Two. Now the world’s largest celebration of arts and culture, it grew to eclipse the formal festival. The Fringe ethos encourages anyone who wishes to perform to show up and have a go, without barriers or parameters, curation or curtailment: “We don’t choose the art, the art chooses us, we just provide a platform for it.”

It’s a policy that encourages innovation and draws in both artists and audiences from the fringes of society. Immigrant comics and circus acts rub shoulders with curvaceous burlesque performers. Hannah is proud of providing “space for under-represented or marginalised groups … a really mixed bag that’s unapologetically different.”

Low price points and a lack of creative accountability shifts the dynamic between artist and audience, giving artists freedom to experiment with fresh ideas and open audience minds to new experiences. Where else could you hear a 30-minute wall of sound extravaganza, so loud earplugs are provided, penned by one of New Zealand’s finest contemporary composers? Or see ‘A Young Man Dressed as a Gorilla Dressed as an Old Man Rocking in a Rocking Chair for 57 Minutes then Leaves’? The latter does exactly what it says on the tin. The art is created when spectator becomes participant as the performer’s repetitive rocking invites audience to intervene.

Almost exclusively staffed by volunteers, Fringe consciously creates community as well as offering dynamic spaces to teach and learn new skills, providing a pathway for participation. Enthusiastic amateurs are offered a platform to perform, in homegrown pantomime or drag bingo, supported by local pros. Tech skills are passed down from old hats to young upstarts.

Centering around the ‘essential community space that is Common Room’, as well as repurposed vacant Hastings venues and streetscapes, Fringe in the ‘Stings circumnavigates the social contract inherent in traditional performance spaces. The social cues and markers that can make some feel excluded from art and culture are deliberately eroded by the Fringe model. Free events, buskers and happenings in public spaces are essential, inviting community engagement under a mandate that art is for everybody – “filling a hole in the arts ecology,” according to Hannah.

By fostering a sense of belonging and ownership, Fringe actively grows the arts consumer base, creating a culture of attendance and participation that feeds further creative pursuits. Hannah feels FiTS shines a light on Hastings’ burgeoning creative community. “It shows there’s probably art happening all over the country in provincial places that’s overlooked, and,” she asserts, “it’s absolutely essential to our wellbeing that we provide spaces for these kinds of cultural activities.” 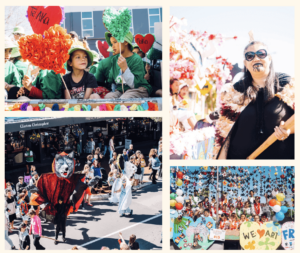 Community arts educator, Ally Rogers, has been using carnival arts to bring people together for years. She’s the brains behind the giant puppets that cavorted through the streets of Hastings to win Most Unusual in last year’s Blossom Parade, the culmination of a series of free workshops, sponsored by Arts Inc and open to all.

Ally values the process as much as the product. “Art is a vehicle for community building and empowerment,” she says. She’s seen participatory arts provide an antidote to the modern epidemic of loneliness, as well as breaking down class differences. “When you’re making art side by side the barriers fall away very quickly and you get people from all different parts of society rubbing shoulders together and getting on well with each other,” she observes.

In a time-poor society, she sees more need than ever for people to prioritise artistic expression, and for art to be grassroots, performative, engaging. She would like the Blossom Parade to shift focus, “to be more about performance, more about audience interaction.” To this end, workshops this year will be artist-led but solicit performers from the community who will be supported to create their costumes. She believes that “asking people to come and perform means we’re counting on them to show up and be a part of it. We’re hoping to get people excited about being part of it.”

The benefits are tangible and manifest. With passion she attests to “the power of art. There’s so much rolled up into it. It’s about your own creative self-expression, achievement, getting in touch with yourself. It makes people feel connected, reinvigorated, restored.”

Empirical research* shows that participation in the arts not only educates, nourishes and feeds our economy and communities, but fosters civic engagement, social tolerance and altruism as well. So with all the wellbeing boxes ticked, how could Hastings District Council not provide diverse, accessible artistic experiences at the very centre of its civic responsibilities?

There are plenty of innovations in the pipeline, creative makers and doers dreaming up a myriad of ways to engage public imagination. Watch out for Fringe in the ‘Stings’ opening Hikoi on Heretaunga; the Blossom Festival’s transformation into a carnival of performance; Umbrella Studio’s multipurpose fluid creative community hub; Akina Vinyl Appreciation Society’s latest early morning Facebook-live Loft Session; and Vesica Aotearoa’s multimedia creative feast, which will be the inaugural Heretaunga Block Festival.

But don’t just watch this space. Pick up a paintbrush or a placard. Link arms and dance with a stranger. Reclaim your streets. Get involved!