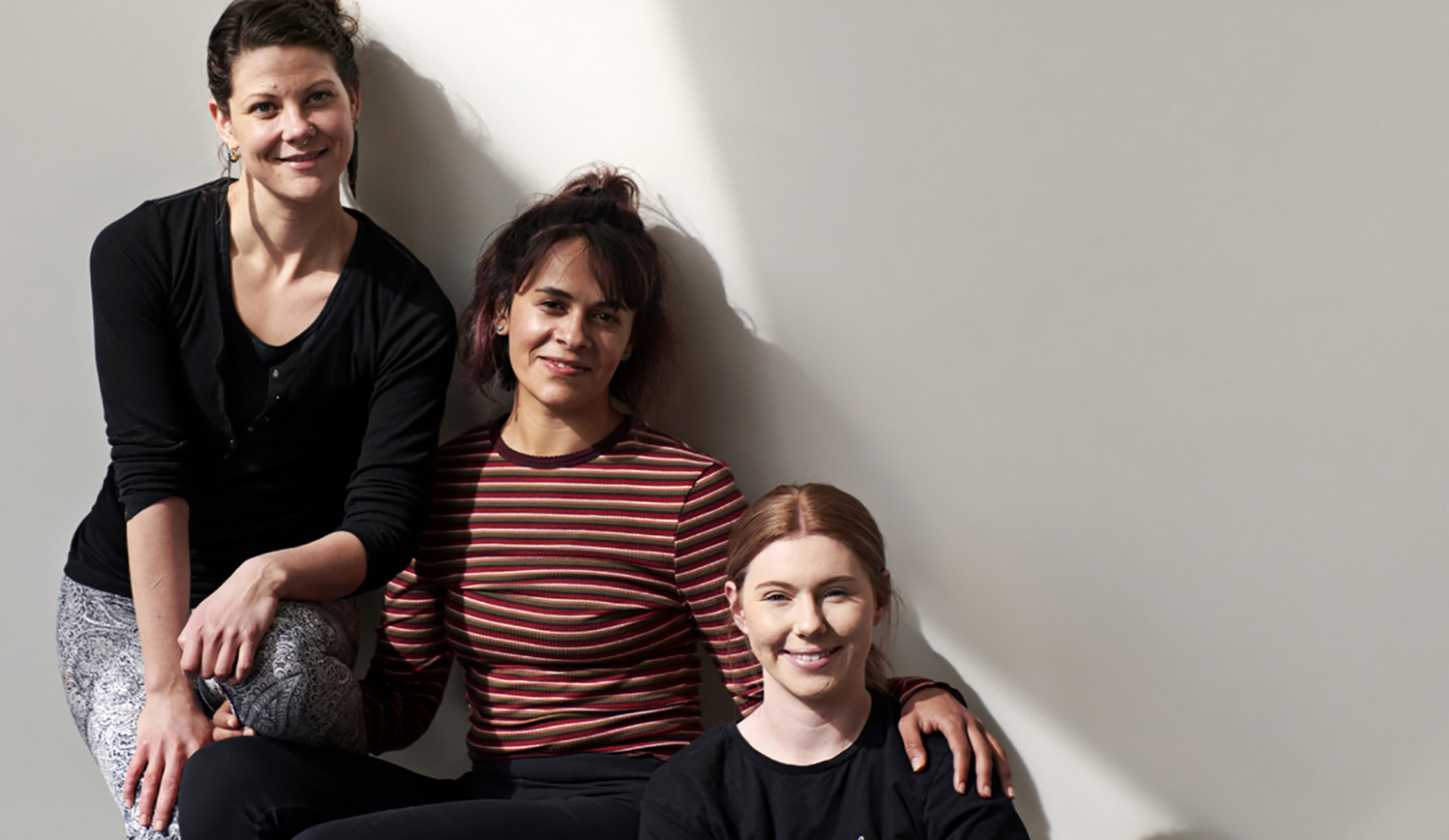 The Human Project is made up of Jandyra (Champa) Maciel (centre in photo), Pippi Jane and Sophie Follet. For this year’s Harcourts Hawke’s Bay Arts Festival they’re collaborating on an outdoor dance piece called And the Earth Shifted Beneath my Feet.

When BayBuzz visits, the three dancers are not dancing at all. At this stage, a couple of months before the festival arrives, the collaborators are in the research and discussion phase of making a dance piece. 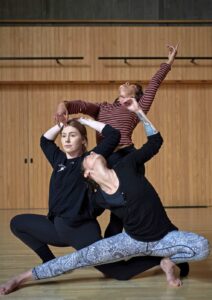 Each of the three have wandered in different research directions in recent weeks, exploring their own areas of inquiry, then bringing their discoveries and musings back to the group to sift through the material and pan for themes and connections.

Sophie (also dance teacher at Iona, hence the very impressive rehearsal space) has been preoccupied with the value and treatment of land. Exploitation of land for development, the loss of green spaces, the lack of future planning. “I’m really focused right now on the importance of valuing what we have.” There’s also a cultural rift to explore – the difference between the idea of owning land (from a western perspective) and ‘being owned by the land’ (an indigenous perspective).

Jandyra (known to most as Champa) has recently returned from a visit with her Melbourne-based Brazilian mother. She recorded stories of her mother’s upbringing in the slums of São Paulo and the loss of connection to her forebears in rural Brazil. She’s exploring the plight of migrants through the experience of her mother: the urban migration, fleeing South America during the fascist dictatorship to refuge in Sweden, then Hong Kong, sea voyages through Asia before finally pitching up in Australia and raising a child, solo and isolated from her family and cultural community.

While the stories are traumatic tales of an era of great unrest in Brazil, there is humour to be found, and insight into Jandyra’s own pull towards dance and performance.

“The family back in Brazil, their life was subsistence farming. They lived physically. My mother remembers her mother squatting to grate food, so much physicality, and your body remembers. It’s called epigenetics, where there’s an imprint of experiences on your nervous system, and that gets programmed in, or passed on.”

“This is why people respond to things they don’t remember. I’ve always felt a closeness to these indigenous movements and dance, even though I had no connection to that actual culture growing up.”

Pippi, moving almost without realising, in and out of fluid yoga poses on the floor, explains her take on the question of identity as it relates to ancestry.

“Sometimes we don’t have the choice or the ability or the resources to know everything about our ancestors, but we’ve been told so much that if you don’t know where and who you came from, you can’t know who you are. But I wanted to ask the question, isn’t it enough to really know yourself? And to understand who you are as an individual?”

“My mother is a first-generation New Zealander. Her parents were both Dutch, so her mother tongue is Dutch, which she spoke at home until going to school and being taught by nuns who made her speak English – in the 1950s they believed that if a child was bilingual they’d somehow learn slower!”

Pippi explains the loss of the family’s language and culture as they worked to assimilate to the New Zealand way of life, their intergenerational work in the forestry industry, the losses against the gains of immigration, and the spiritual connection they eventually found on land near Tarawera.

Together, the three muse on the connections that are bubbling up: land, water, wood, isolation, the ‘placelessness’ of immigrant people, who are foreign in their new land, and no longer fit in their homelands or the homelands of their parents. The loss of stories and connections through poverty and transience.

What seems to be sinuously slipping together here are the collective notions of longing and belonging. And a desire of these three dancers to find ways to honour their people, their land and their histories through their medium.

The conversation turns from ancestral stories and dialects to movement languages, and the way dance can affect, in ways other artforms cannot. There’s an agreement between all three that the visceral, primal nature of movement can convey a story or an experience in a way that makes the audience truly, physically feel a connection to it, and relate, rather than just bear witness.

As for the outdoor aspect of the performance piece? There’s an immediacy that comes when walls and traditional stages aren’t there.

“Movement is so concise, and accessible. But also, there is a weirdness to movement in public that makes people want to stop and look,” says Pippi. “It disrupts the space.”

Pippi, Sophie and Jandyra explain they’re getting closer to the next step in the dance piece’s development. “This is the point where we need to start connecting it to Aotearoa,” says Jandyra. “Next we start to ask, what is it that brings all these stories to this place? And why?”

But for now, it’s time for these three to warm up. Breathe, stretch and converse in movement languages as they ripple across the glowing Blythe stage.

The Human Project will be performing the finished piece during the festival at Albert Square in Hastings, White Night in Napier, and outside the Spiegeltent on the Village Green.