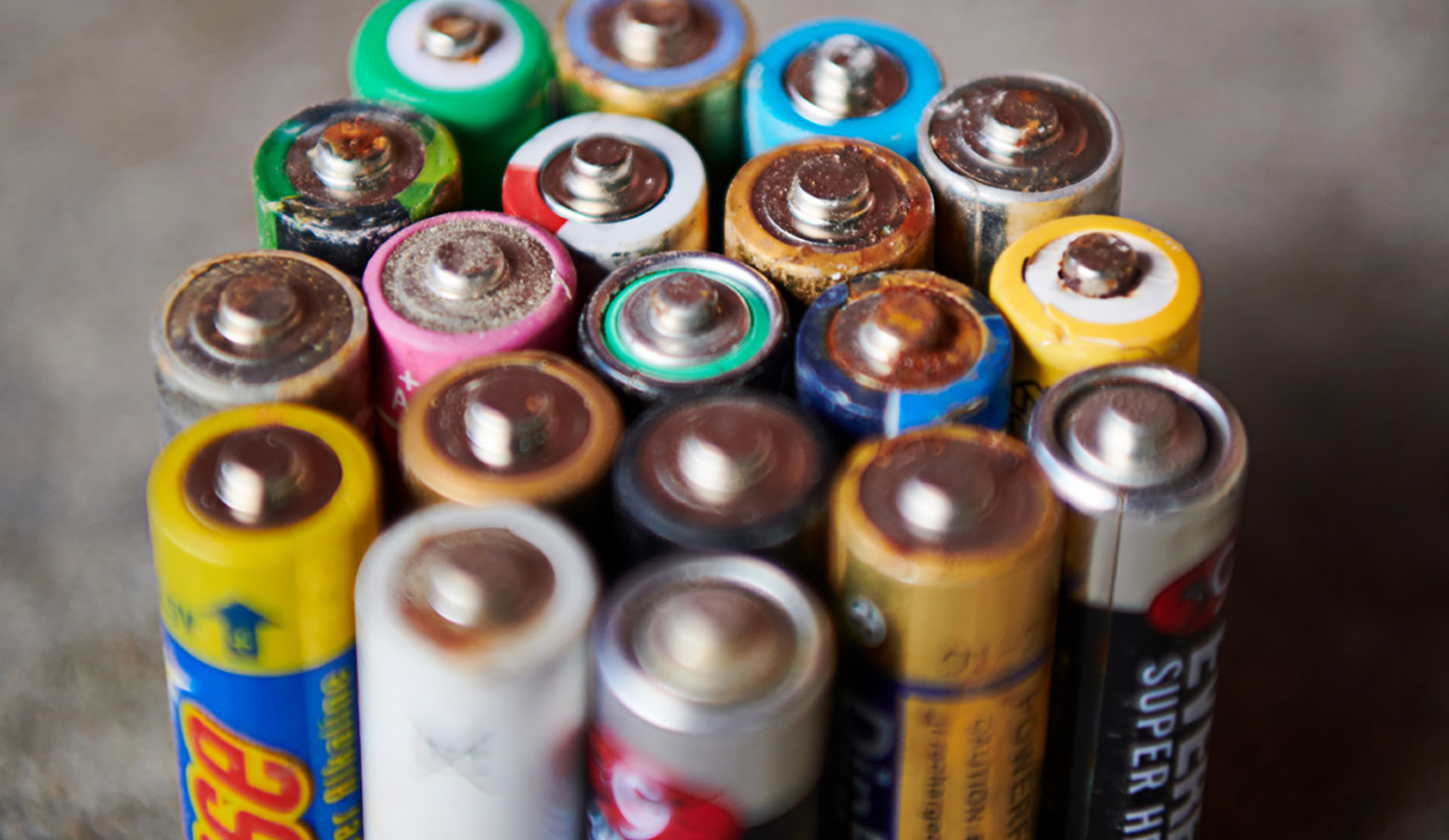 Behind the dream that we’re heading into a less-carbon tainted techno-utopia are some dirty secrets. Consider batteries – how they are made, who’s mining what to make them, and what happens when they’ve run their course.

While breakthroughs in affordable storage are accelerating the shift to electric vehicles, bikes, solar storage, and increasing our reliance on battery-powered gadgets and gizmos, the toxic footprint of their manufacture and disposal raises serious concerns.

The World Economic Forum’s (WEF) Global Battery Alliance says the raw materials for many batteries are extracted at high human and environmental costs in an industry that seems to care little for health and safety and the pollution caused.

Battery manufacture now accounts for 60% of the 125,000 tonnes of cobalt mined annually from the Congo (DRC), China, Russia, Canada, and Australia.

The bulk of this is used for EVs and comes from the copper belt in the Congo and Zambia where Amnesty International has identified human rights abuses, including the use of child labour.

From a disturbing birth, batteries too often face an equally unsavoury ‘death’.

According to WEF there are few systems in place for reusing, recycling or disposing of the eleven million tonnes of lithium-ion (Li-ion) batteries expected to be discarded by 2030.

It wants manufacturers to disclose the carbon footprint of batteries so consumers can make a more informed choice.

Like the unintended consequences of plastic manufacture, governments and local authorities, producers, importers, distributors and consumers are being challenged to look more closely at end-of-life consequences.

In Hawke’s Bay a concerted effort has been made over many years to keep batteries from mainstream rubbish, with a plea for consumers to set old batteries aside for separate collection.

Although most standard alkaline torch and appliance batteries still end up at the dump, councils prefer to encase them in concrete to prevent toxic ingredients leaching into landfills, soil and groundwater.

Rechargeable batteries are also being dumped, often with little consideration for their recycling value. “There’s a lot of valuable material in them” says Angela Atkins, waste planning manager at Hastings District Council.

These types, including nickel metal hydride (NiMH), lithium-ion and nickel–cadmium (Nicad or NiCd), contain heavy metals and toxic substances and present a fire risk even in storage or landfills.

When the casings get damaged or squashed against the side of rubbish compactors they can become a heat source which can ignite other material, says Atkins.

A huge toxic blaze ripped through a large stockpile of unrecyclable plastics at a Smart Environmental depot near Thames in March. Although the cause is still being investigated the company “is fairly sure” it was caused by lithium-ion batteries.

Across Hawke’s Bay there are drop-off points for all types of batteries – the main Hastings council building, Henderson Rd Refuse Station, the Environment Centre in Karamu Rd, Hastings, the Flaxmere, Havelock North and Napier libraries and Napier’s Redclyffe Rd dump.

Between them the councils annually collect around 2,700kg of batteries at these drop-off points and another 1,200kg through the annual Hazmobile Hazardous Waste collection day and transfer stations.

The majority, once there’s a pallet load of 20 litre buckets, end up with E-Cycle in Auckland, which sends them on to “sophisticated” facilities in Australia for recycling or disposal.

E-Cycle director Jon Thornhill says his company, which brokers battery disposal for 15 councils and community groups, believes education and mandatory stewardship are the only way we’re going to keep batteries out of landfills.

He’s looking at a deal to pre-process or shred certain batteries before export and agrees we need to look at options for further onshore processing, urging councils to ensure contracts with rubbish collection firms specify separating batteries.

While there’s been a decade of talk about improving e-waste recycling, Thornhill says there’s not been much progress and he’s disappointed one of the main targets in the latest government e-waste plan is on EV batteries, when that market hasn’t yet emerged.

About 90% of the batteries sent for disposal are alkaline or handheld, and he says we need a lot more education to ensure lithium-ion and other recyclable batteries aren’t included in household rubbish.

Over the past three years Hastings has collected and paid for processing 4,830kg of batteries, costing ratepayers $28,785.

“It is expensive to ship and process” so councils are keeping an eye on the costs, says Napier City’s van Veldhuizen.

He says the stewardship approach would take some of the pressure off councils. “Like Europe we may find in the future that there are collection bins in the shops where they’re sold and we pay a little more to help fund those return systems.”

Cost down, waste up

Between 2010 and 2018 the cost of lithium-ion batteries plummeted 85%, with Bloomberg New Energy Finance’s Energy Storage Outlook 2019 predicting a further halving in cost by 2030.

That’s largely due to the increasing demand for EV and household solar storage that can deliver excess electricity to the power grid. That demand is already evident in New Zealand through the uptake of Tesla Powerwall and other household and commercial storage products.

In our increasingly cordless, wireless world there are batteries in just about everything from watches and calculators, to torches, laptops, keyboards, mice, remote control units, cameras, smartphones, drones and power tools.

We have back-up batteries for our computers and our phones and the gaggle of gadgets will only escalate through adoption of 5G mobile and the Internet of Things (IoT).

Some last for hours or days, others rabbit on like the Energiser bunny for weeks, but in the end all get tossed, even the rechargeable ones, which are often retired early as the devices they power become fashionably obsolete.

Angela Atkins says there’s increasing use of lithium ion batteries, but most cellphone batteries only last two to three years. “We really need to move away to a circular economy where we don’t rely so much on virgin materials to create them.”

The problem is exacerbated through built-in redundancy which artificially limits battery life, and the fact some manufacturers are sealing them in so they can’t be replaced.

The job of disposing and repurposing batteries is only going to become more complex and demanding as larger industrial, household or commercial batteries, including solar units, age and fail to hold a full charge.

The options to repurpose, recycle or refurbish are only going to work if there’s a buoyant market to counter our tendency to toss out the old and go for the new. 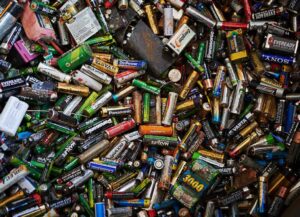 After a decade of EV use, the owners of Nissan Leaf and other models are increasingly aware their batteries are no longer going the distance.

Although some Japanese factories offer reconditioned batteries, replacing a small hybrid can cost between $NZ2,000 to $7,000 and a full EV replacement significantly more.

Reconditioned batteries for some older e-bikes, slowly slipping back to peddle power, can cost up to $1,200.

Regardless, we remain firmly on a course toward a battery charged world. Bloomberg New Energy Finance (BNEF) predicts that by 2040 nearly 60% of all new car sales and around a third of all cars will be electric.

The New Zealand Government set a target of 64,000 EVs on the road by 2021, but we’re well short of that with only 15,000 registered across all types, mostly second-hand imported passenger vehicles driven by Aucklanders.

Meanwhile there’s a massive effort underway to improve the prospects for solar, renewable energy and battery storage. Australia is viewed as the test case with up to 60,000 homes expected to add systems this year.

The industry ideal is to ensure this new generation of EV, home and commercial battery units can hook directly into the grid, enabling reversible charging.

Under political and environmental pressure to reduce fossil fuel generation, electricity suppliers are at a challenging crossroads with consumers looking to make a little cash or at least get a power bill rebate for their contribution.

For example, electric buses with huge batteries are now rolling off US production lines with two-way grid connections as a standard feature. Uber Technologies and other large fleet operators are also angling to plug into the grid when vehicles are idle.

Car makers, including Renault, already see themselves as part of the ‘electricity ecosystem’ with two-way transfer in their EVs and, like Tesla, Nissan and Volkswagen AG, are investing in energy-storage products for homes and small businesses.

Oil giants including Royal Dutch Shell, Chevron and Total are hedging their bets for the emerging fossil free future investing billions in electric power and residential storage, including industrial-scale batteries and charging facilities.

Bloomberg suggests that by 2050 solar and wind will supply almost half the world’s electricity based on sustainable storage, something Tesla is pushing the boundaries to achieve across the Tasman.

The French energy company Neoen SA invested NZ$97 million in Hornsdale, which can power 30,000 homes, although its principal function is to stabilise fluctuations in Adelaide’s power supply where renewables account for half the power generation.

Green Mountain Power Corp based in Vermont, has worked with Tesla to provide 2,000 residential batteries. Its CEO Mary Powell believes storage can be “a leapfrog technology … the killer app” to move us away from bulk electricity providers to community, home and business-based energy systems.

While all this leapfrogging is going on the question remains who’s monitoring the environmental impact and how are we going to safely dispose of each new generation of this barrage of batteries when they fade, become unfashionable or redundant?

Dominic Salmon of Hastings-based 3R Group says we need to keep asking the same question about batteries that we ask about all waste product, “Why are we doing what we do and how can we do better?”

Although batteries are relatively low volume, the issue is more about toxicity and impressing on importers and distributors the need for stewardship.

In New Zealand, he says, we only have one Act which needs to be far more proactive and come more in line with the European Union where the legislation is “far more draconian”.

Being party to the Basil Convention means we have to track and trace our hazardous material, which is going to require more detail around e-waste and battery exports, including lead acid and nicads.

Salmon suggests EV or lead acid batteries can be repurposed as solar storage for homes so they’re not necessarily a waste product.

But we need to start thinking about ramping up our own processing capability and how to recover some of the valuable materials in rechargeable batteries. 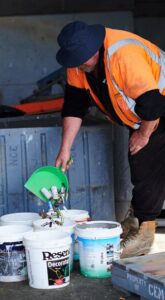 That, he says is part of the current conversation around stewardship and who’s accountable. “We shouldn’t be dumping on other shores; we should be dealing with our waste onshore.”

So what about parallel importers who bring in volume packs of 12 cheap AA or lithium ion batteries that don’t last a third of the time as the four quality batteries you get for the same price?

A product stewardship option would place responsibility on importers and distributors and may prevent this type of battery coming into the country.

After all the talkfests, he suggests it’ll take at least three years for mandatory stewardship to be enacted, meaning councils and consumers must continue to prepare for that advent and do their part.

That might come down to conducting an inventory of the number and types of batteries used in our homes and businesses, investing in rechargeables, and having a collection bin to separate them for collection at end of life.

Why? Because air transport contributes to 4.9% of human-caused climate change.  In Europe plans are being developed with an aim…