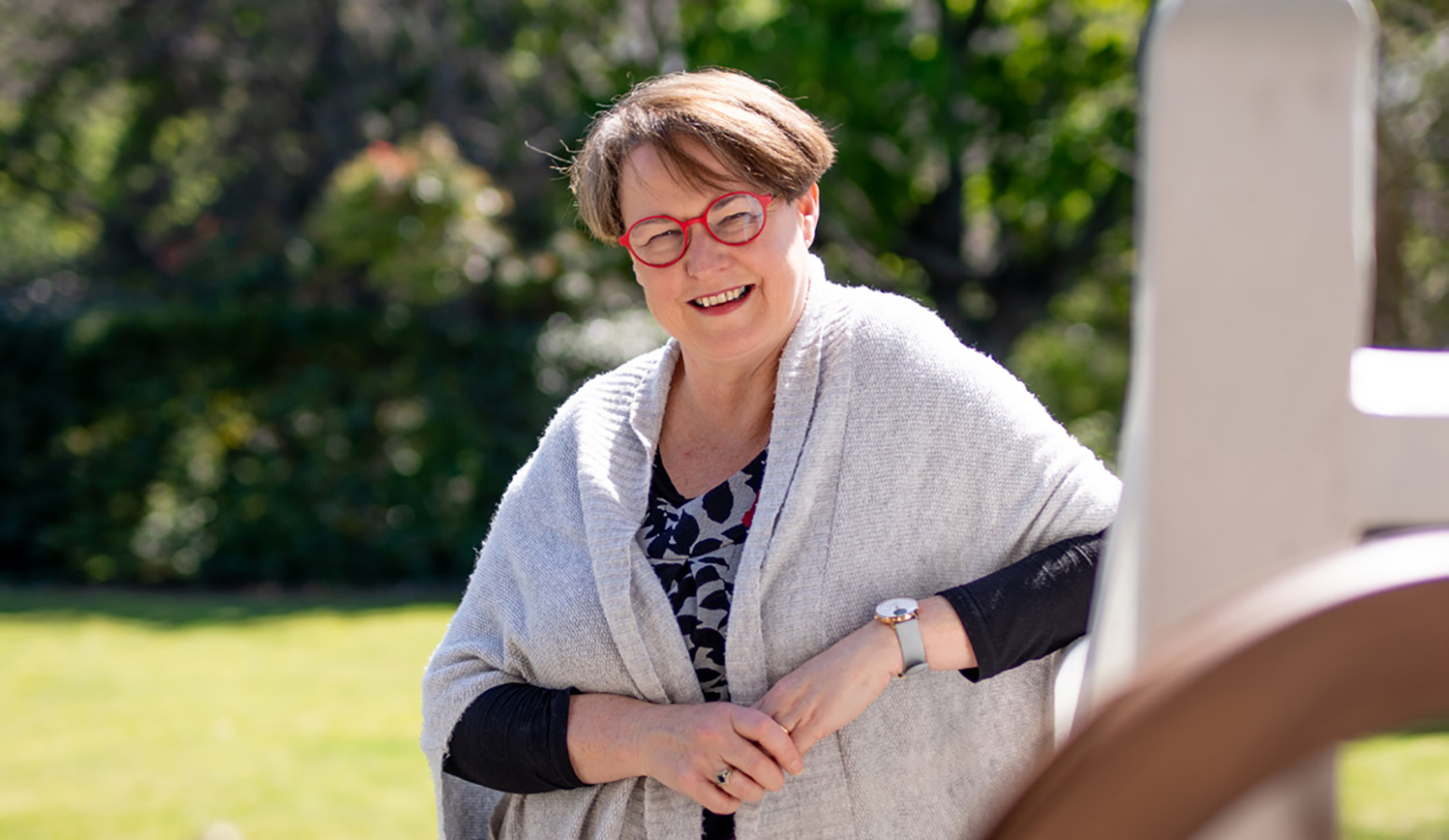 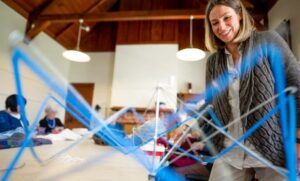 Being involved in the arts is good for us – good for our mental health and emotional wellbeing, good for the economy, for children’s educational development, for community engagement. A win-win for everyone. The research, and our leaders, clearly say so.

But traditional pathways for involvement are changing as the boomer generation ages, with memberships for hobby, sports and social clubs in freefall.

Here in Hawke’s Bay, beautiful Keirunga Gardens is a bit of a secret despite the community arts centre’s best efforts to publicise itself. Run by a society on an ‘old-fashioned’ membership-based model, Keirunga has been the home of art and crafts for decades, but to flourish and thrive, it needs to attract a wider spectrum of the community and to evolve to meet the changing needs of those with creative inclinations. 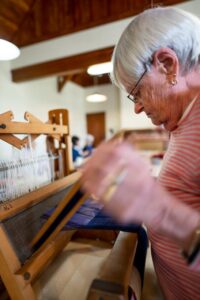 The Keirunga homestead and gardens were gifted to the people of Havelock North in the 1960s by George and Elizabeth Nelson, who were part of an arts and cultural community known as the Havelock Work that flourished in Havelock North until the Second World War. Here Elizabeth, who was an amateur water colourist and painted in the gardens, hosted afternoons for her friends, including garden walks, providing a meeting place for ‘serious talk’.

Hastings District Council owns Keirunga Gardens and is responsible for the upkeep of the grounds and buildings, which along with the original homestead and cottage, includes a memorial garden for the Nelsons, along with concert circles, a courtyard, handsome old trees, English-style lawns and rose-covered arbours.

By the 1980s the homestead and cottage was in high demand by artists, stitchers, weavers, and it was decided to build a new art facility adjacent to the homestead. The whole community got involved in restoring the gardens and grounds that had become neglected. Fervent amateur thespians, weavers, artists and potters fundraised with fairs and activities, developing building plans and doing voluntary work until the building – Frank Bacon Studio – was complete with a theatre, painters’ studio and pottery that opened in 1986.

Over the years, the Keirunga Society has been the umbrella for a diverse array of cultural pursuits and creative camaraderie, with regular, active meetings of the Hawke’s Bay Folk Artists Guild, Heart of the Sun Morris Dancers, Creative Fibre Crafts, Keirunga Artists, Quilters, Writers, and Embroiders groups (amongst others).

In August 2016 a devastating fire (a suspected arson) seriously damaged the main art studios, theatre and pottery, bringing a sudden drop in members and halting all painting, drama and pottery activities. But membership at Keirunga had been static for years, as the Society struggled with limited funding and too few members prepared to take on governance roles.

Many are older, like Richard Moorhead, aged 79, who sits on the board and convenes the Painters group and has been an active member for the last 17 years. Voluntary directors also perform operational duties, but for some, other business and family commitments means attendance at meetings can be patchy.

So, although the Keirunga fire was catastrophic, it’s also been a catalyst for change, an opportunity for a massive rethink in how the facility could be used in the future and the changes required, but most importantly, how to ensure a sustainable model.

On the other side of the Bay, for example, the Waiohiki Creative Community Trust supports artists by offering them affordable studio space rather than membership – 13 artists currently. The studio rents pay for building maintenance and a paid part-time administrator, but importantly, it offers the artists solitude to work, freedom to focus on ideas and explore new and exciting creative possibilities, and opportunities to collaborate with others.

Also based at Waiohiki is the Taradale Pottery Club. With 80+ members and growing, it is defying the trend of dropping memberships, reflecting perhaps the growing interest in ceramics and the outreach of regular events like the free Fire Nights that bring the public into the creative arts village.

Keirunga Society’s president, Juliet Cottrell, has overseen the $1.3 million redesign and rebuild of the new ‘Creative Hub’, which includes art studios and a new revamped black box theatre, with Stage 3 (gallery and workshop space) still to be completed (subject to funding). She is upbeat about Keirunga’s future.

“With the advent of the fire we had to come together to work a new way forward to make some decisions about where we wanted Keirunga to go and how we wanted it to be,” she says. “We took our vision out over the next 5-10, even 50 years. We have resolved that the doors must open a lot wider; to a more diverse group of people; with more diverse arts endeavours, and, for the place to be absolutely buzzing, all the time.” 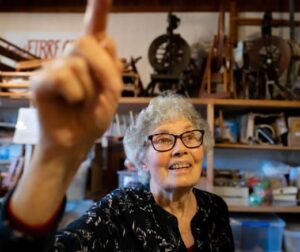 As a step in that direction, a permanent tenant now occupies the former pottery, helping to provide an income stream. While the Society still has a strong membership of 300+, there’s now provision for ‘Friends of the Arts’ groups too, such as the Drama Workshop and Pencil Room – groups committed to taking on long-term leases, that fit with the spirit of Keirunga (arts, crafts, performing arts) without being directly affiliated.

“We also want to make room for emerging and established artists in the studio spaces,” says Juliet, “and for people who want to try new things. There are lots of nooks and crannies here that people can inhabit, even if it is just for two hours as a one-off, or a two-week block.”

But the highest priority, Juliet says, is restructuring Keirunga to separate governance from operations, and employing a part-time facilities manager and administrator. This has happened, but for only six hours each per week and it is hoped that future funding will pay for more hours.

“All this requires money, which means we spend hours filling out endless funding applications to charity funders.”

Striking a balance is difficult between the social and community needs of members, many of whom are in the retirement-age bracket and may risk isolation and loneliness but for Keirunga, and the commercial imperatives required to survive into the next generation. The changes described are necessary to avoid an otherwise inevitable subscription hike (currently $50pa, plus GST and a variable group fee). But not everyone is happy.

There is a sense that Keirunga risks becoming a commercial art centre, as most community art centres have become around New Zealand, and that it will lose its important place in the hearts of its members. The camera club has moved out and into a church hall in Hastings, citing the increase in rented space, and the potters – always an independent-minded group, who could not accommodate, or be accommodated by, the new changes – have gone too, moving on to alternate premises in town. This marked the end of an era for Keirunga and was deeply disappointing for many. 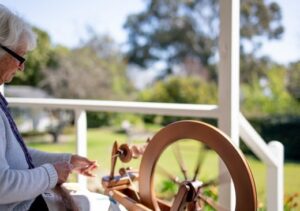 Eyebrows were raised when a commercial business moved into the pottery as a permanent tenant. Fortunately, disquiet over the Sewing Room is lessening as members recognise it brings people into Keirunga who were not aware it even existed. People who then ask about what is going on, what it’s used for, and are delighted by the beautiful surroundings.

Juliet Cottrell says one of the biggest challenges going forward is ensuring “We’re respecting the history of this place. Absolutely. We must honour the origins of Keirunga, how it started, which is why the membership body is so important, of equal importance to other people using this place.”

Now that Keirunga is again fully operational, public workshops, short-term courses and evening classes are being scheduled. The membership numbers for Keirunga Painters are growing again and children’s art sessions introduce new parents to the facility. The quilters have a full muster of members and new groups such as the U3A and independent theatre and performing groups are using the theatre.

The Society desperately wants to attract new and younger members to carry it into the future and happily reports that recent new residents to the Bay and younger members have joined. They are making it known they are looking for new board members with IT and marketing experience and hope that from this new blood, new directors may be recruited at the AGM in March.

Ultimately it will be these members and locals who determine Keirunga’s future. And that depends on how well the Creative Hub caters for the community’s needs and interests. But one thing is for certain, Keirunga is a taonga, and I am not alone in thinking so. Local people love this place and will fight for it, as with the recent kerfuffle over the Keirunga Oaks.