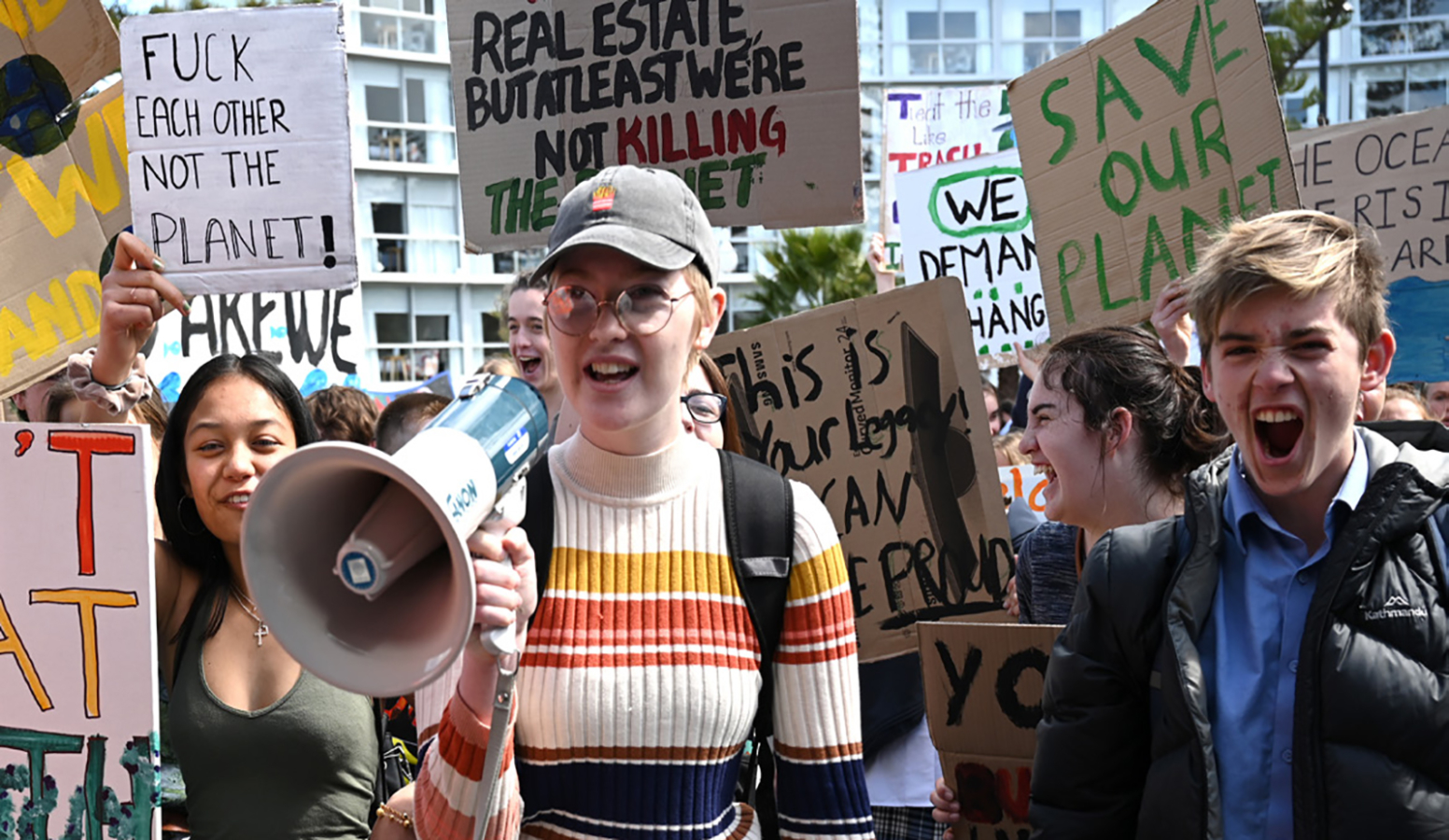 Global warming poses unprecedented – radical actually – challenges to our prevailing lifestyles. As BayBuzz’s lifestyle and culture editors, here’s our view of the conundrum.

The last couple of months have felt noisier. School Climate Strike, Extinction Rebellion (XR), Greta Thunberg’s UN rebuke. Young people have a lot to be restless about, and they’re making themselves heard.

But not without equally noisy backlash.

At first glance it looks like a generational chasm, but it’s not so clean-cut. Many of those marching with the youth in recent strikes have been adults (a roughly 50/50 split on Napier’s streets); pensioners are being arrested for XR disruption in unprecedented numbers.

The gap seems rather to be between those for whom the system thus far has been working well and who wish to protect that benefit, who believe economic growth is unnegotiable, and that all shall be resolved through trickle-down effect, individual merit and technocratic solutions – or who believe conspiracy myths – and those who recognise that the current model (built on a backbone of industrialisation, colonisation and consumerism) is broken.

Major system change will be required to alter the course we are currently on, and that’s going to take more than bamboo toothbrushes and eco-bags, and voting every three years. It will take a social revolution, a paradigm-shift in thinking, beyond simply lifestyle choices. Every aspect of how we do things will have to be questioned, challenged, re-thought, re-designed. It’s as much about culture as politics.

The youth-led climate strikers are demanding our political leaders, here and around the world, “do everything in their power to limit warming to 1.5 degrees to safeguard our right to a future on Earth.” They’re calling for the government to declare a Climate Emergency, to enact an ambitious Zero Carbon Act into law that puts in place a legally enforceable plan to get to net zero carbon by 2040, and to cease all exploration and extraction of fossil fuels while investing in building a “renewable, resilient and regenerative economy, and energy and transport systems now.”

Many, however, have lost faith in the political system altogether (including people we know who chose not to vote in the recent election following years of conscientiously exercising their voting rights – it’s not just the young and the disenfranchised).

The grassroots XR movement is calling for nonviolent mass civil disobedience to “stop planetary extinction” (or at least minimise it – there’s a certain fatalism here) and are busy exploring creative, regenerative, de-centralised, inclusive ways of system transformation. From the notion of the commons and consensus building to bio-cities, indigenous connections and ‘donut’ (i.e. circular) economies. Their demands are simple, yet far more radical: tell the truth; go net-zero carbon by 2025 (mobilising wartime efforts); genuine participatory democracy, with citizen rather than consumer engagement.

The fledgling local XR group, for example, is targeting Hawke’s Bay Today to stop publishing climate denial material and to give proper, scientific coverage to the climate crisis; it’s supported the 350.org campaign to pressure ANZ to stop bankrolling oil companies; made submissions to our local councils; mobilised for a colourful bicycle action.

Recently, UK journalist George Monbiot was arrested in London for defying the government ban on Extinction Rebellion ‘assemblies’ and claiming his right to protest.

“I know this action will expose me to criticism as well as prosecution,” he writes. “Like other prominent activists, I will be lambasted for hypocrisy: this is now the favoured means of trying to take down climate activists. Yes, we are hypocrites. Because we are embedded in the systems we contest, and life is complicated, no one has ever achieved moral purity. The choice we face is not between hypocrisy and purity, but between hypocrisy and cynicism. It is better to strive to do good, and often fail, than not to strive at all.”

(Or as Jonathan Pie more bluntly puts it: “If you do nothing, you’re an arsehole.”)

That’s an observation that particularly struck a chord with both of us, as we wrangle, daily, with questions on what disruptive actions and sacrifices to take in our personal lives and how to justify our compromises.