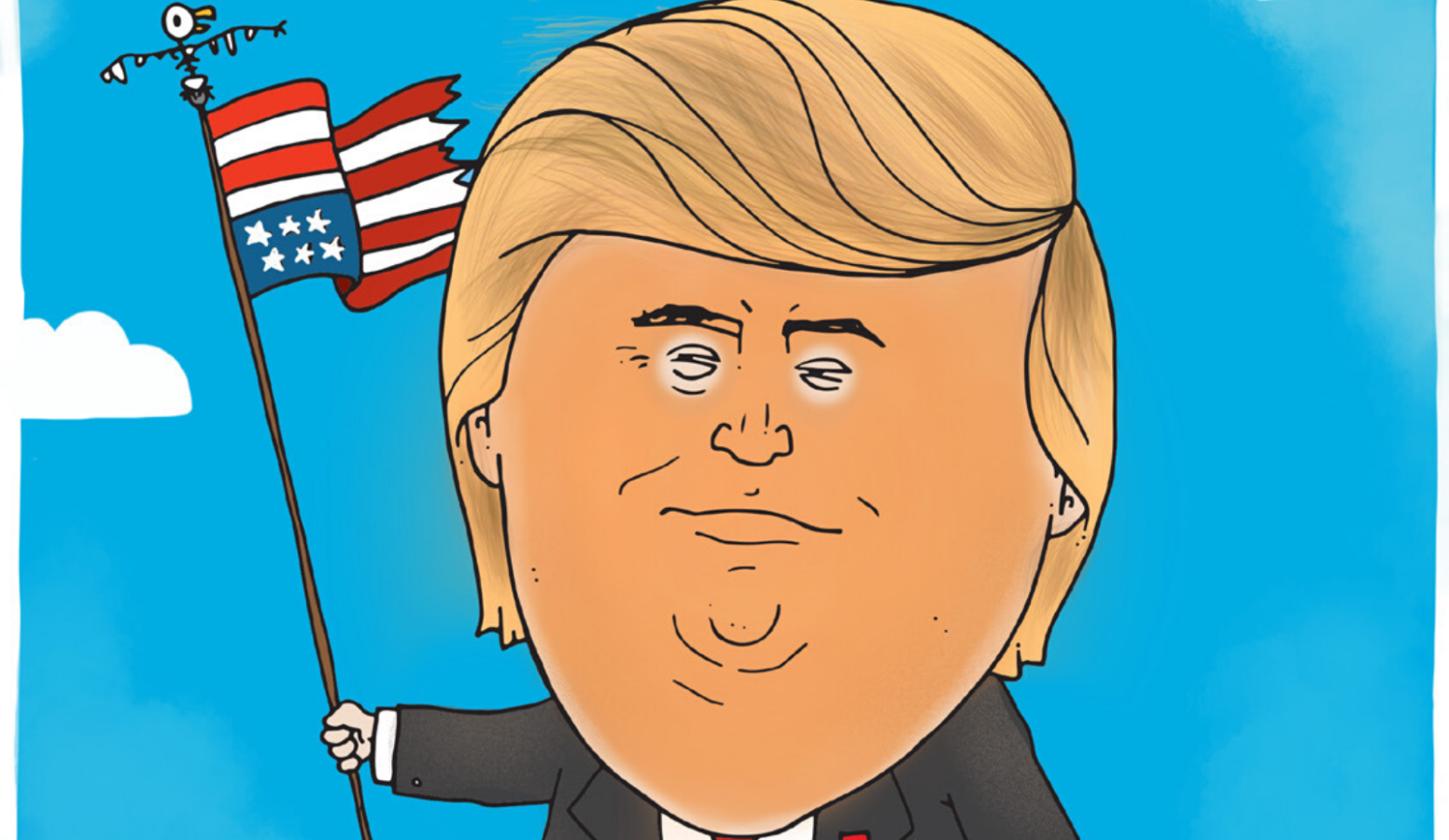 Most of my professional life in the US was spent in and around national politics, at one point working in the White House, but mostly strategising and raising money for advocacy groups seeking to influence public policy.

So, from that vantage point, with a monumental Presidential election unfolding, I’ll try my hand over the next few months at interpreting what is going on. I hope BayBuzz readers find this interesting and I certainly welcome alternative prognostications.

I’ll start immediately with a disclaimer. I believe the re-election of Donald Trump would be a national and planetary disaster, making the last four years look as wholesome as apple pie. I’m not going to waste any time justifying that view … you can take it or leave it. But my analysis will be clinical.

So, it pains me to say that, as of writing this, I expect President Trump to win re-election, igniting a surge in overseas interest in high-end NZ properties.

The election is Trump’s to lose.

First, the first maxim of electoral politics is ‘own your base’. As the Senate vote on impeachment underscored, Trump still totally owns his political base of support on the evangelical right. Republican Senators were certain of this when they threw their personal integrity to the wind.

Reporters from the NY Times, Washington Post and others are scouring the grassroots these days, trying to gauge how ‘average’ voters really feel about Trump. Have 2016 Trump voters backed off their support, offended by Trump’s manifest personal flaws of character and bellicose style?

And what they are hearing is ‘No’, save perhaps for more educated suburban women who mainly live in states where they can do him no electoral damage (I’ll come back to the pivotal ‘electoral map’ issue). Voters one might expect to be most morally offended by Trump forgive his personal peccadillos because they agree with his policy initiatives, most notably his war against reproductive rights and immigrants, and for guns.

Consequently, 39% of registered voters say they will vote for Trump regardless of whom the Democratic Party nominates for president.

Second, extending well beyond the core he’ll never lose, Trump did win nearly 63 million votes in 2016, not quite 3 million shy of Hillary Clinton. The day before the Senate vote, Trump enjoyed a 49% job approval rating, his highest since taking office, with 52% in favour of acquitting him. And he has no opponent for the nomination to worry about … he’s already waging his general election campaign.

Trump’s ‘job approval’ score will undoubtedly bounce around, and indeed the leading Democratic candidates tend to beat Trump (some currently by as much as 8-9%) in head-to-head surveys. All eyes are now watching whether he will continue upward (alongside the economy, more on that in a moment) or whether his good showing reflected a momentary ‘sympathy’ vote for a president deemed unduly harassed by partisan Democrats.

So, like it or not, Trump is not starting from a point of weakness amongst the general public.

Third, and now we’re coming to the heart of the matter … ‘It’s the economy, stupid!”

This was the mantra bolted to the 1992 Clinton campaign by his strategist James Carville. Clinton successfully tagged incumbent George Bush (the elder) with ruining the economy, then in recession. It worked, despite the fact that in March 1991, just after the easy-peasy Kuwait war, fully 90% of polled Americans approved of President Bush’s job performance.

Many US pundits believe the state of the economy in the presidential election year is the most important determinant of the political outcome. I tend to agree.

And by the usual macro-measures, the US economy looks to be – and will remain – quite healthy for the rest of 2020. Trump will exploit that to the hilt, actually beyond the hilt with his usual exaggerations and outright fabrications as he did in his State of the Union campaign speech.

Should a prosperous economy (leaving aside what impact the president might actually have had) reward Trump, or do the macro-stats hide misery at the household level?

Will recent trade deals with Mexico, Canada and China actually restore manufacturing jobs to America’s heartland as Trump trumpets? Only one thing is certain, there will be no factual verdict before November.

In the coming months, the debate over the state of the economy will be crucial. Hopefully it will be robust and informative. But I have my doubts. Even those whose personal lives are financially distressed will respond to hopeful rhetoric … indeed, the more miserable, the more blind faith will take over.

Currently, 63% approve of the way Trump is handling the economy (Gallup), the highest economic approval rating for any President since George Bush (the younger) immediately after 9/11. It’s worth noting that Presidents Reagan in 1984, Clinton in 1996 and Obama in 2012 each enjoyed rising popularity alongside rising economies during their successful re-election campaigns.

So on the economy it comes down to the rhetoric and the question becomes, who will voters believe? If voters believe Trump, he’s a sure bet for re-election.

But perhaps equally or even more importantly, where do the Trump believers live? 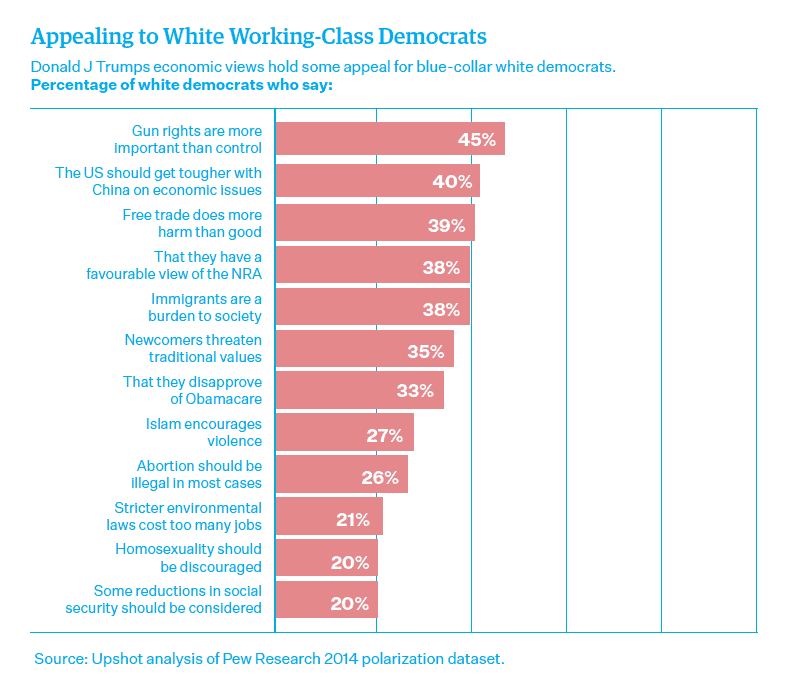 Fourth, only a few states will actually matter in the 2020 election, and Trump carried those states, albeit very narrowly, in 2016.

In the US, the Electoral College selects the President, not the popular vote. And each state awards its Electoral College vote on a winner-take-all basis. It didn’t matter whether Hillary Clinton won California by 1 vote or over 4 million (her margin in fact was over 4 million), she received all of that state’s 55 electoral votes.

Each state gets the number of College votes equal to its number of US senators and representatives, so even the smallest population states get 3 votes (giving such states a disproportionate influence that, given their political complexion today, benefits the Republican candidate, but that’s a secondary point). 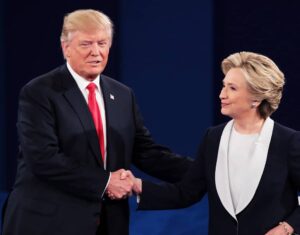 If Clinton had won Florida and any one of Pennsylvania, Michigan, Wisconsin or Ohio, she would be President today. A switch of less than 200,000 votes in two of those states would have elected her.

So, because of the Electoral College, it matters hugely which states you win. And which voting blocks must you carry to win each of those states?

For reasons unique to each state’s political make-up, the 2020 presidential candidates, Democrat and Republican, will effectively ‘write-off’ many states as unwinnable. And, as explained above, if you haven’t a realistic chance of winning state X, even by a handful of votes (as indicated by previous election outcomes and your campaign polling), why waste precious campaign money and candidate time and energy farting around with those states … unless you win the state, you get no electoral votes for your effort.

With many states presumed to be locked up by one candidate or the other, attention and effort gets concentrated on a relatively small, maybe a dozen, ‘swing’ states.

In 2012 and 2016, the most critical of the swing states were Pennsylvania, Ohio, Michigan, and Wisconsin – the Rust Belt States – and Florida. In 2012 Obama carried each of those states; in 2016, Hillary Clinton lost each one, most by excruciatingly small margins (eg, Michigan by 10,704 votes out of 4.7 million cast).

So, despite winning the nation-wide popular vote by nearly 3 million votes, Clinton lost the Electoral College vote 232 to Trump’s 306.

If Clinton had won Florida (which she lost by about 113,000 out of 9.3 million cast) and any one of Pennsylvania, Michigan, Wisconsin or Ohio, she would be President today. A switch of less than 200,000 votes in two of those states (out of nearly 129 million votes cast nation-wide) would have elected her.

If the candidates zero in on that handful of states again – Rust Belt plus Florida – as they will, it is the voter complexion of those states that really matters. Simply put, Trump can afford to lose every educated suburban woman in California because he’s already written off the state, but he must be sure that if he’s going to lose such women in suburban Philadelphia, Detroit or Cleveland, he had better have a replacement block.

And he does … non-college educated white voters, especially males. Obama carried this (traditionally Democratic) working-class cohort in 2012, Clinton did not.

Lesson learnt, Trump won this same group in 2016 the same way … this time Hillary Clinton was the darling plutocrat of Wall Street. And hence his focus on trade (and ‘job-stealing’ immigrants) over the past four years.

These younger working-class whites represent a larger share of the vote in the Upper Midwest than anywhere else in the country.

If Trump convinces these folks, again, that he’s their protector, their champion, that ‘It’s the economy, stupid’, he’s a shoe-in.

Next column I’ll look at the Democrats, each of whom at the moment is merely a niche candidate. As I write, just after the New Hampshire primary, Bernie Sanders is in the driver’s seat strategically, as he has captured the left wing of his party, while the moderate candidates are simply dividing the rest of the pie. Wrote one US pundit the day after NH: “No candidate so firmly planted on the left has been so well positioned to capture the nomination of the Democratic Party.”

The more the moderates hang on, splitting the primary votes and caucuses, the more they will allow Bernie to pull away. An exact replay of how Trump won his nomination in 2016.

In any event, at this point I don’t see any of the Dems competing effectively for the white working-class vote … the only way for a Democrat to win.