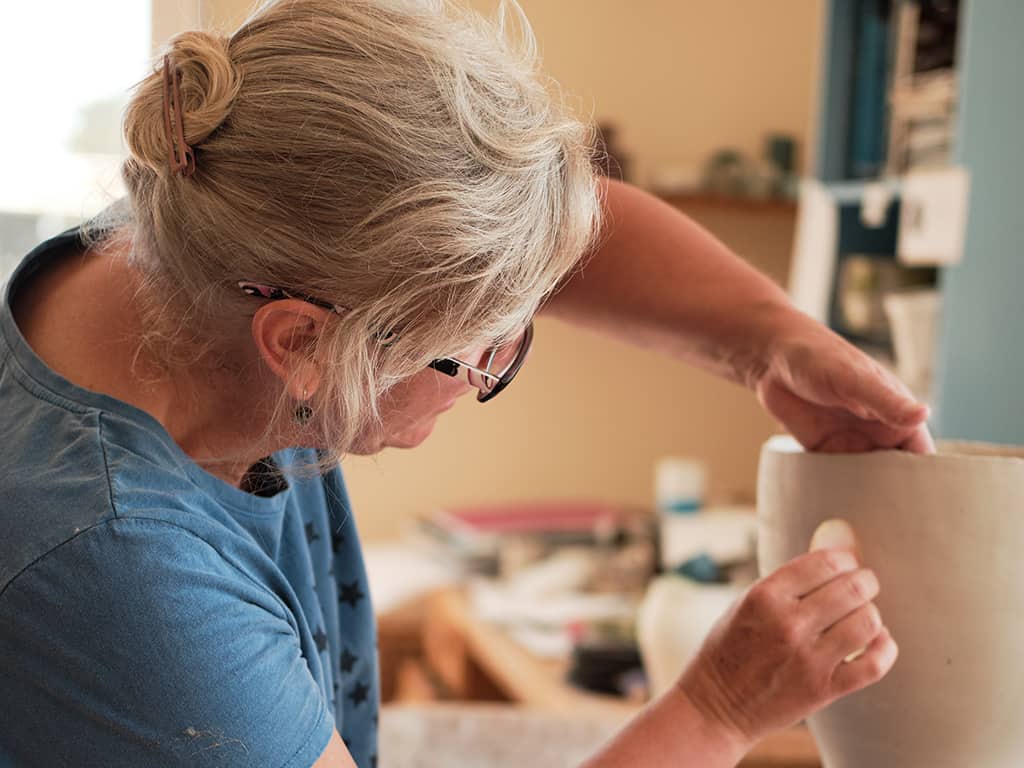 As a ceramics practitioner I am excited to be part of a resurgence in clay-making not seen since pottery’s heyday in the 1960-80s when Barry Brickell in Coromandel was up to his elbows in mud at Driving Creek and pottery evening classes and clubs were alive with eager potters.

In the current iteration, ceramic art is used as a design feature that is artfully photographed in home and lifestyle magazines, while in restaurants the top chefs are presenting food on a pallet of handmade pottery.

The pottery schools and clubs are once again fully subscribed with waiting lists of participants eager to play with clay as they struggle to cater for the level of interest.  Potters’ supplier BotPots reports that the 30 Shimpo pottery wheels they imported recently sold out immediately and there is another shipment on the way.

So what is ceramics?

The word ‘ceramic’ comes from the Greek word for ‘pottery’, a practice as old as mankind. Simply put, it is wet clay shaped into a form, dried and then fired to an extremely high temperature. The process involves the initial bisque firing of ‘green’ dry clay to around 1000C. This chemically changes the clay particles into a hardened but porous state that will absorb liquid. The item can be coloured or textured in a myriad of ways, but the most common surface treatment is to coat it in a glaze solution before firing it to 1260C melting the glaze into a glass-like sheen. Now ‘ceramic’ – it has vitrified and is impermeable to water.

The 1970s passion was for functional domestic ware, mainly thrown terracotta bowls, pots and mugs with earth-coloured glazes. Production pottery was a career choice for many, but when imports of mass-manufactured white tableware from China became fashionable in the 80s and 90s production pottery collapsed and the interest in pottery making waned.

Eight years ago, after decades of struggling to stay afloat, the membership at Taradale Pottery Club at Waiohiki Creative Arts Village began to grow, and pressure for working space necessitated the expansion of its premises and investment in new kilns. Currently, eight beginner and intermediate classes a week are catering for up to 75 people per week, and the membership continues to grow as the potters gain the confidence to work independently.

At the time it was thought that the successful BBC series, The Great Pottery Throwdown, may have been an influencer, but it is more likely that it reflected the already growing fascination with ceramics in the UK. The USA was always strong on craft and it has been maintained there over many years. Pottery is taught in schools and with exposure early, it’s an option for school leavers. That is not the case here.

Annette Bull (who tutors at TPC) and Rob Cloughly (at Otago Polytechnic) see mother and daughter pairs and girlfriends coming together to classes and both have noticed that new learners are often younger professionals. Sometimes the high achievers among them will have repeatedly watched ‘making’ videos on YouTube to understand the process before joining a class.

Certainly, an open approach to finding out and the regular handling of wet clay hastens learning about the effects of gravity, drying and surface textures and treatments. Problem solving is a hugely satisfying part of the process as are the many glazing and firing techniques one can use and the effects of extreme heat. With ceramics there is so much to ‘know’ and one never stops learning.

New Zealand artists are taking ceramics into extraordinary new realms of abstraction and design chutzpah. While the focus is still on functional pottery made on the wheel, the vessel maybe reformed while still soft and later fired in a wood or gas kiln for unusual results. The same applies with hand-built sculpture made from clay.

Stunning examples of this can be seen at the current exhibitions of Waiclay Awards based at the Waikato Museum in Hamilton and the Portage Awards at Te Uru Contemporary Art Gallery in Auckland. These works are very highly valued and competition for award selection is fierce. The high-end galleries are definitely sitting up and taking notice and some are dealing in ceramics only – Avid in Wellington, Masterworks in Auckland, Form and the National in Christchurch and Burning Issues, Whangarei.

Fuelling the excitement are the hundreds of new practitioners pursuing their clay skills in pottery clubs and courses around New Zealand. This is the Pinterest/YouTube/Instagram generation who watch amazing and beautiful pots being made online and it ‘just looks so easy and inspiring’. Most likely most work at a computer screen in their daylight hours and by contrast, clay feels very grounding and real, it balances out the technology and maybe earns a little extra income as well.

When clay gets serious

The Otago Polytechnic in Dunedin caters for those who seek a specific qualification in ceramic art. Rob Cloughly MFA, the Ceramics tutor and Ceramics Programme Coordinator for Distance Learning, reports a much greater interest in ceramics and sculpture than a decade ago and a lot of interest in making wheel-thrown pots.

Their on-campus degree, the Diploma in Visual Arts (DVA), consists of 90% school leavers who rotate through all the media studios during their first semester and then choose a major … and ceramics is very popular.

“The aesthetic has changed and sculpture students do post-modern abstraction, non-form work and they make some weird stuff as they develop their skills,” Cloughly says. “There’s a much greater focus on reduction firings and craft objects and they find the 70s aesthetic new and exciting. That’s far away from earlier cohorts.”

Otago Polytechnic’s Distance Learning DVA programme has doubled its numbers in six years to 50 students (90% of whom are mature students). It is a two-year programme full time, or four years if taken part time and these students are mentored by professional potters locally through the pottery clubs. We have many of these graduates and students residing in Hawke’s Bay who enrich our ceramics community.

Creating a successful pot is a huge achievement and a just reward for perseverance. There is something meditative about the clay process; a process that excludes other thoughts and calms the mind. The tactility of clay and the sensory pleasure of manipulating it into a pleasing form is what hooks us in. This is slow art.

Perhaps the growing passion for clay is a response to the existential and environmental dilemma we all face, with advances in technology, worries about sustainability and the global nature of business. Clay grounds us, it serves a need to touch base with the real and the tangible and provides a meditative creative expression so lacking in our lives.

Kay Bazzard has been working in clay for 14 years and delights in learning new things about clay every day.  Her creative focus is on expressive figurative sculpture – currently being exhibited at Muse Gallery in Havelock North, the Art Shed at Crab Farm and the Hastings City Art Gallery.