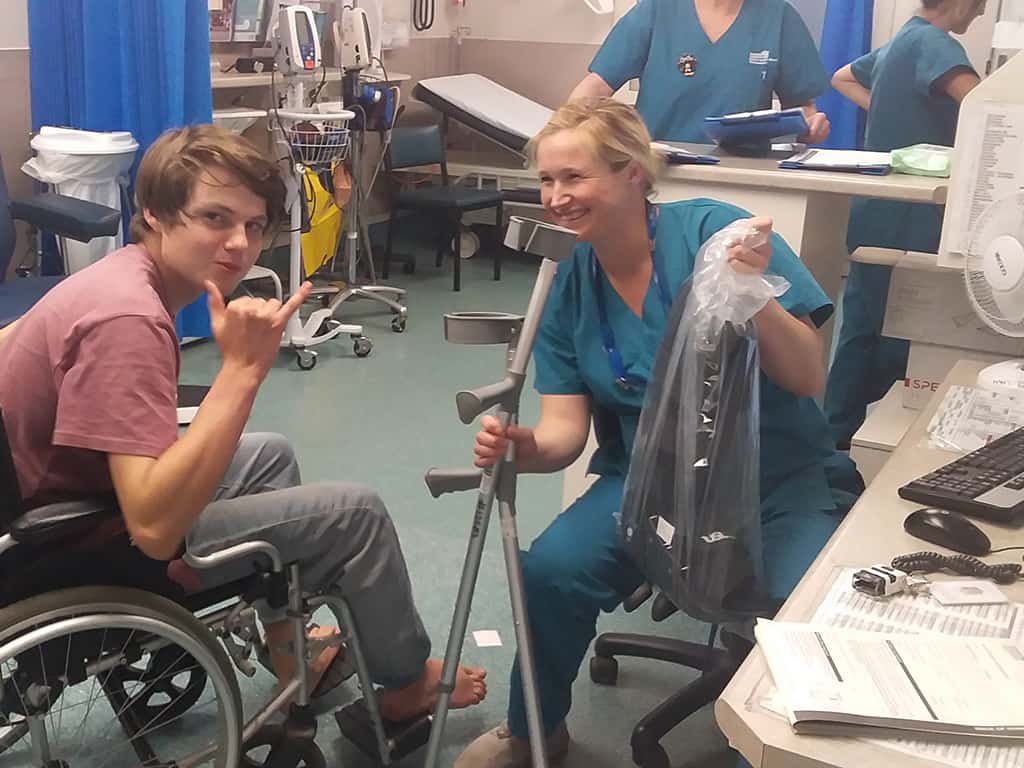 Behind the lines of ED

Heading into lockdown, my teenage son felt like it was all happening to him – all the fun stuff had been cancelled and he’d just broken his foot. I tried to console him that he was living through an historic moment, and his injury was like a backstage pass! He got to go behind the lines, to the emergency department.

Wednesday 18 March, we hadn’t had a confirmed case in Hawke’s Bay at this stage, and we didn’t know how swiftly our freedoms were about to be curtailed, but we were on edge, we could see the storm clouds brewing in the rising, worrying trajectory of numbers. When we rocked up to ED in the early evening for an x-ray, eerily, we were the only ones in the waiting room; there was no wait. Which, having covered the crisis in public healthcare for BayBuzz previously, I knew was weird.

The staff told me “this is unprecedented”, and that it made them nervous; “It’s the calm before the storm.”

“Everyone’s too busy panic-buying for accidents,” I joked.

An ambulance showed up and masked staff wheeled someone swiftly through to isolation – a suspected Covid-19 case – which only heightened the uneasy, prescient vibe.

On the day of lockdown itself, we were called back to ED for further scans. This time we were met by three tiers of screenings: a security officer in face-mask and gloves who quizzed us (what are you here for? Have you travelled recently? Are you sick?) before allowing us through to the entrance foyer where we stood 2m from a masked nurse behind a desk with a clipboard, who wrote down answers and took my son’s temperature before waving us through. Here the receptionist directed us to the triage nurse isolated behind glass, who screened him again.

Once more, tiered screening aside, the experience was quiet and low-key, only a couple of others, in pairs, in the waiting room. Visitors to the hospital were no longer allowed and support was limited to one person per patient. The staff were attentive, working collaboratively while simultaneously briefing each other quietly in the corner on the latest logistics and newest protocols, which, it was clear, were evolving from shift to shift. None were wearing masks.

On 2 April, armed with an official letter to prove the trip was essential, my husband took my son as instructed to the hospital’s fracture clinic, which had now been relocated to be accessed via the ED foyer. The same tiered screening, the same eerie quietness, though this time my husband was sent back to wait in the car as our son was waved through solo (no support person allowed).

On 11 April, in lieu of an ED visit, I spoke with a nurse (let’s call her ‘Jane’) on the phone about lockdown life on the frontline. It’s definitely been quieter than normal, she says, “a bit X-Files, especially on a night shift.” Only 69 patients the other day in ED, when usually there are 120-140. It’s a similar picture, it seems, to the 50% drop being reported in ED presentations around the country. But due to the whole tiering process of admission and a strict coded and zoned system for the managed separation of patients, staff and wards, everything takes longer; “we wouldn’t be able manage the same volume”, she says.

Anecdotally, there are normally 12 ICU beds with ventilators in Hawke’s Bay Hospital, and to gear up for treating Covid-19, provision was made for more. In fact, the hospital has made a whole new ICU unit in the Endoscopy suite in preparation, says Jane; the equipment is “apparently incredible” and “looks pretty cool”.

Jane has been separated from her family since the lockdown began. She says it’s the case for lots of the staff at the hospital. As a precaution, as many as could sent their families away or moved themselves out into single Airbnbs and the like for the duration. The department itself has been split into ‘hot’ (for suspected covid patients) and ‘cold’ (non-covid) areas, each kept completely separate. And on the floor the isolation continues, with little interaction between staff, who now work in small bubbles of 2-3. “We’re not a team like we used to be, you’re in a bubble, and you don’t break that bubble if you can help it…. It’s so bizarre, so different to our normal way of working. But it’s very necessary.”

Official numbers may only show one or two hospitalisations for Covid-19 in Hawke’s Bay, but this doesn’t reflect the times the full covid-response has kicked in, the times ill, covid-symptomatic patients have come into the hospital, or even died; until tests return negative, they’re treated as ‘red’.

While New Zealand’s strategy of elimination appears to be working, and we’ve passed peak cases, it’s worth remembering that without such measures the prospects were looking dire for our already overwhelmed healthcare systems, with potentially up to 20,000 requiring hospitalisation for Covid-19 in Hawke’s Bay alone [back-of-the-envelope calculations bases on the Te Pūnaha Matatini modelling scenario, which helped inform the Government’s strategy].

There was a lot of anxiety among ED staff leading up to the lockdown, says Jane. “We weren’t coping with patient volumes prior to covid so there was a feeling, ‘we are drowning now, this will sink us’, but because we’ve had dramatically fewer people we have been able to manage it.”

The biggest issue remains PPE. The supply on the ED frontline still feels “tenuous”, and is still being organised or rationed from shift to shift, says Jane, although it is getting better. “The situation is changing all the time, as the hospital tries to respond to people’s concerns. It’s very fluid. We’ve been lucky, we’ve had time to segue into it, we’ve had time to get used to it. We feel so much more confident than we did a week ago.”

One of the hardest things to deal with, however, has been patients dying and family members unable to be with them as they “cross over” under current Alert Level 4 stipulations – “some nurses are really struggling with that, and the families, of course.” When we were looking at the whole system being overwhelmed with high infection numbers, Jane explains, making every effort to limit contact, even if it means people can’t have their close family members with them when they come into ED in a life-death situation, was “an easy choice”. “But three weeks down, there is no flood, so we could, maybe, relax things a bit. We have to acknowledge that, while, when we made that decision, the outlook was different, there has been some human cost.”

Since lockdown began Hawke’s Bay Hospital has been completely reconfigured to house a ‘Covid-19 hospital’ within the hospital, the DHB announced yesterday (16 April).  “Within the space of three weeks,” says Dr John Gommans (acting chief medical and dental officer), “we have quite literally turned the hospital upside down in order to put measures in place that will further protect others, whilst having robust care and capacity plans in place for future COVID-19 patients.” He says it’s been a huge team effort across across clinical, logistics, digital enablement and procurement teams.

As well as the covid-specific ICU ward in the new gastroenterology building, the reconfigurations include a separate clinical screening and triage area for potential covid patients in a prefab building outside ED’s main entrance; changing the paediatric ward to an adult in-patient respiratory assessment unit for those will acute respiratory illness that may be due to Covid-19 – the paediatric ward has been shifted to the Rehabilitation Unit, which in turn has been moved to Orthopaedics, which has been moved to the A3 (surgical) ward. ‘Emergency planners’ are currently finalising staffing plans to run the ‘covid hospital’, says Dr Gommans.