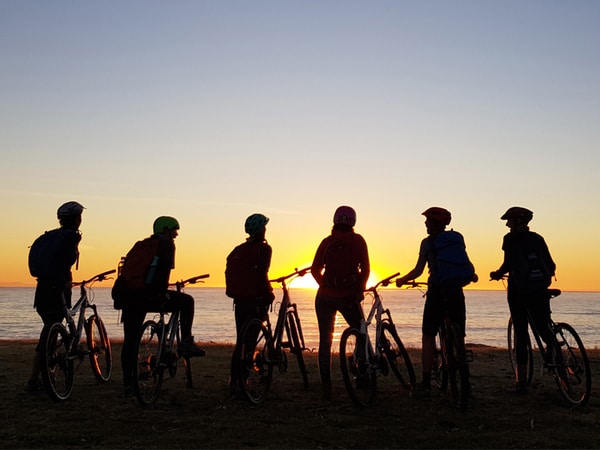 The book discusses the inertia that exists in almost every idea that is promoted upon this earth until a point in time when a ‘tipping point’ is reached, whereby the idea gains significant momentum, building a head of steam to the point that it is unstoppable.

The Covid19 pandemic has brought forward the tipping point of many ideas that have been discussed for years, but in the space of just a few weeks have turned into reality. Personal cases in point: my daughter is remote learning from Hawke’s Bay at Otago University, my mother and father-in-law are finally using electronic banking, and all my board meetings are now being conducted on Zoom, Teams, or Skype.

So what ideas, here in Hawke’s Bay, have now reached a tipping point due to the new environment in which we now find ourselves?

We are going to need lots of fresh ideas to re-energise our post Covid19 economy. Some will reach a tipping point, others will not.

The first idea I want to promote is the ‘Sunrise Rail Trail’. A four-day, three night, bike ride from Napier to Gisborne or from Gisborne to Napier, along the existing (reconstituted) rail corridor. Sure, there won’t be a whole lot of international tourists for a while, but there is going to be a truckload of domestic tourism over the next two years, looking for new experiences.

This opportunity would be a shot in the arm for Gisborne, Mahia, Wairoa, Tutira, and Napier/Hastings. Both the redevelopment and ongoing cycle spend will be significant. Look to the impact of our current cycle network as an example. The daily sunrises, the number of tunnels and viaducts, and the beauty of the scenery, would quickly put this journey on the bucket list of most bike enthusiasts.

To be fair, the idea has been promoted for some years, but clearly has not reached a tipping point for a number of reasons, principle of which is the ‘Rail’ vote. This is a vocal group of New Zealanders (including here in Hawke’s Bay) who still think that rail on small trunk lines is viable. The reality is that the Napier to Gisborne rail line has been a rail graveyard for over a decade. I’ve lost count of the money thrown at it and the number of re-openings. The fact is that no one wants to pay to use it. Just ask Kiwi Rail.

Here’s the reality of log transport on the East Coast. There is no rail north of Gisborne, on the Napier-Taupo Road, the Napier-Taihape Road, and down State Highway 50, so trucks are the only option in these tree-rich locations. Outside of these locations all logs need to be loaded onto a truck at a skid site to be carried to a rail loading yard for off- and on-loading again.

This only makes economic sense (meaning a forestry owner will be prepared to pay for the use of the train) when the train ride distance is more than 60km. Draw a 60km circumference around the port of Gisborne and the port of Napier and you have the actual forestry locations in Hawke’s Bay where using a train makes economic sense. Draw the circumference … there is not a lot of forest. The rationale for using trains on this route for forestry does not stack up.

There are all manner of other arguments that the train lobby put up. Fossil fuel use in trucks is one. Checkout the new electric truck launched by Tesla last year https://www.tesla.com/semiThe Tesla Semi or another version from Volvo or Mack are coming.

We will be out of this lockdown in a few weeks and many of our businesses, especially our tourism businesses, will be in dire straits. The government needs projects, such as the Sunrise Rail Trail to stimulate jobs. The forestry industry will only pay for the most economic form of transport. Rural communities like Gisborne, Mahia, Wairoa, and Tutira will be massive winners, certainly many times more than they would be through the creation of a couple of subsidised rail jobs.

It’s time for local politicians to admit that there may be better options for the Napier to Gisborne line.

The ‘Sunrise Rail Trail’ is an idea whose time has come.

Do you agree? What other Hawke’s Bay ‘tipping point’ opportunities do you foresee?