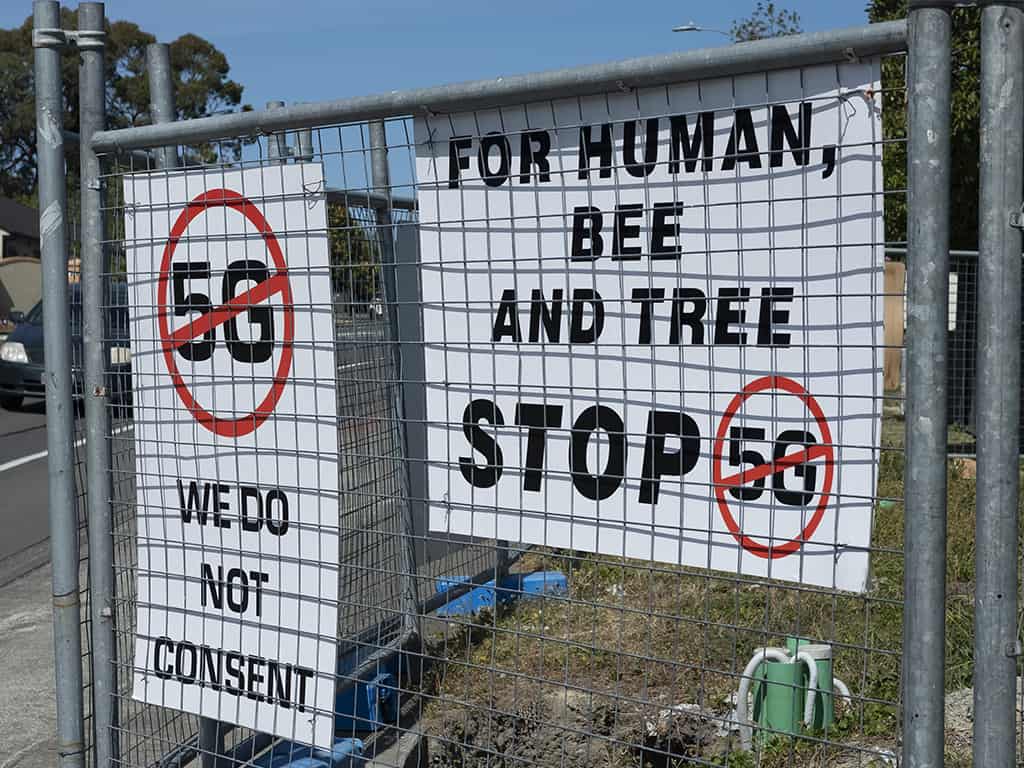 Wild claims about 5G technology making us more vulnerable to Covid-19 or being part of a global vaccination and tracking scheme continue to circulate despite efforts to curb the fake news pandemic.

A number of cellphone towers across New Zealand have been damaged through acts of vandalism, allegedly inspired by a belief that 5G cellular networks are a health risk or somehow connected with the spread of the Corona virus.

Spark, 2degrees, Vodafone and Rural Connectivity Group towers have been targeted and in several cases resulted in disruption to essential communications in the midst of the national emergency.

A newly commissioned cell tower north of Kaitaia, part of the Rural Broadband scheme to improve communications in outlying areas, was irreparably damaged and a tower in Manurewa was set alight with the attackers posting footage on Facebook that was shared 405 times before the account was shut down.

This week, just as the nation came out of Level 4 lockdown, a fire at another tower in Papatoetoe is being treated as suspicious. Police continue to investigate the attacks and threats made on other towers.

The irony is those responsible haven’t done their research on 5G or what the ‘cell’ sites look like, as none of the towers targeted were 5G.

My friend Robyn Kamira, who’s worked in the IT sector for decades, wrote in The Spinoff this week, the 5G link to Covid-19 is fake and part of a sophisticated scam that has geopolitical motives.

Kamira warns the direct repercussions of attacks on vital communications infrastructure “that is, anything on a pole, not an actual 5G cell site” often isolates communities already under stress and endangers lives.

She says it tends to undermine confidence in a key technology that will improve telecommunications infrastructure and business recovery, opening the way for new precision technologies, energy management and futureproofing our primary sector industries.

Similar fears about 5G sparked protests in Tairua, Coromandel, in August last year around a Vodafone tower and in Havelock North in September when Spark began constructing a cell site to meet the massive increase in cellphone use in the village.

There was a massive pushback from residents who objected and a public meeting was called, although it looks like the tower will go ahead in a smaller form. The fenced off area continues to host anti-5G placards, despite Spark insisting the site will not host those services.

While much of the protest was around installing towers close to residential, business areas and schools without proper consultation, the concerns were around potential harm from microwave radiation.

With many 5G network builds underway around the world, Ericsson forecasts that by 2023 there will be 9 billion mobile subscriptions globally and a billion of those will be 5G.

Vodafone launched its 5G mobile network on December 10, 2019 in Auckland and it’s now available in parts of Wellington, Christchurch and Queenstown.

Spark (formerly Telecom) has launched its 5G services in Alexandra, Westport, Twizel, Tekapo, Hokitika and Clyde and, now that we’re out of level 4 lockdown, has begun work on expanding to other locations.

A series of videos, so-called documentaries and articles, shared through social media and mass messaging like some sort of rabid chain letter over the past year, has been blamed for encouraging the vandalism.

During the Covid crisis more than 80 mobile phone masts across the UK were torched or otherwise vandalised, disrupting critical infrastructure. US disinformation ‘experts’ link the fake news to Russian media outlets releases from mid-2019.

The Guardian (April 27) outed one of those passing on the fake news last week, as Jonathan James, an alleged former Vodafone executive who claimed the corona pandemic was a cover for a global plot to install 5G so the world’s population could be tracked through vaccines.

A voice recording of James talking to a group of followers and overlaid with a panoply of illustrations went viral when it was released in March.

The Guardian quotes Vodafone insiders saying James was with the company for a year in a sales role and had no involvement with 5G.

James now an evangelical pastor based in Luton, suggested Covid-19 was a fake disease caused by our bodies reacting to 5G radio frequencies and claimed God told him “the coronavirus is not what’s killing people, it is clearly, categorically, unequivocally proven that the radio frequencies we are being exposed to are killing the people.”

He wasn’t the first to cobble together a confusing amalgam of global control theories that implicated Microsoft founder and lately immunisation advocate Bill Gates in a plot to produce coronavirus vaccinations that contained miniscule computer chips to track individuals.

YouTube has been deleting the clips as fast as they pop up through its policy on ‘dangerous disinformation’, but they’re still accessible.

Spark insists 5G health concerns are unfounded and its network “is fully compliant with both international and national limits … based on decades of scientific research that can also be applied to 5G”.

The Ministry of Health says measurements at laboratory and operational 5G sites in Australia have shown exposures to 5G signals are similar to, or lower than existing cellsites, and at levels which are small fractions of the public limit in the standard.

The Telecommunications Users Association (TUANZ) insists exposure is not hazardous and 5G services using non-ionising radiation have no physical impact other than mild heating at extreme exposure levels.

The New Zealand Telecommunications Forum (TCF), strongly condemned “wilful damage” to the mobile networks, at a time when the industry was trying to respond to increased demand for phone and internet services.

Prime Minister Jacinda Adern says there’s been comprehensive and ongoing research showing 5G causes no harm and the conspiracy theory was “just not true” — there was no link between 5G and Covid-19.

She and others refer to the chief science advisor’s web site and the Ministry of Health site for accurate information.

InternetNZ is disappointed that people are committing dangerous attacks on critical infrastructure during a time of national emergency and welcomes continuing development of New Zealand’s Internet infrastructure.

It claims 5G technology will enable innovation and lifesaving new ideas, in fields like health, intelligent transport systems, and agriculture.

Vodafone, which already has 5G networks in the UK,Germany, Spain and in Italycalls the technology an exponential leap forward in speed, reliability and connectivity, “the biggest innovation in communication for over a decade”.

Its marketing hype says the changes ahead mean “life is about to become smarter, safer, more efficient and more reliable than ever in ways most of us can’t even imagine”. It talks about innovations in healthcare, manufacturing, automobiles, transport, agriculture, gaming, media and entertainment.

When I find myself backed into a technological corner and need a final word on a complex matter, I often turn to Bridge Pa-based industry guru Tony Krzyzewski who’s sought after globally for his insights.

Simply put, he reckons 5G is about as harmful as hanging around a 250 lightbulb.

“While it is true transmission towers (and cellphones) emit electromagnetic energy, classed as radiation, the frequency 5G and other cellular services use is non-ionising radiation, incapable of breaking apart the structure of DNA and causing damage.”

As the frequency of electromagnetic transmissions increases, we reach a point, above that of visible light, where the radiation does cause damage. “That’s why going out in the sun too long and exposing yourself to ultra-violet ionising radiation can cause skin cancer.”

If the radiation from 5G transmissions were dangerous, “then visible light, which is of a much higher frequency than 5G, would be very dangerous to our existence … and it is obviously not,” says Krzyzewski. 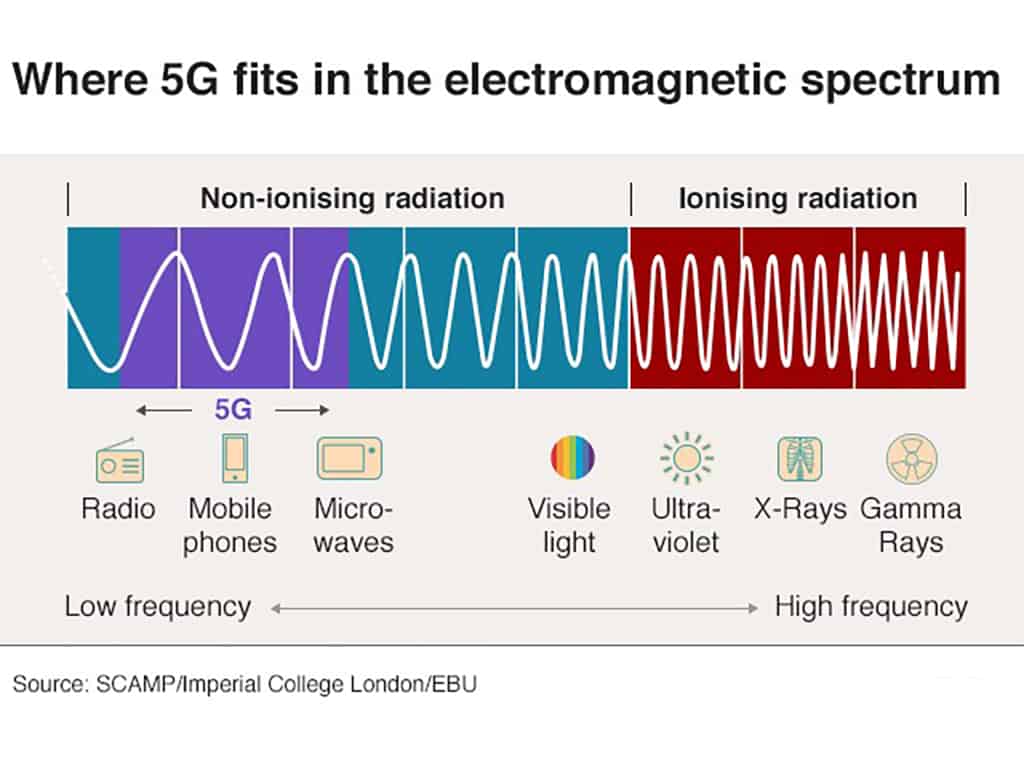 In relation to concerns about being in proximity to transmission towers, he says a  5G macro cell, one of the larger proposed transmitter types, has a transmission power of 120 watts, about the same as an older incandescent light bulb.

Knowing that, you can calculate how much energy is received by someone standing 100 metres away because, in technospeak, all electromagnetic radiation follows the inverse square law.

“In reality the signal level reduces even more than this due to other factors. By the time that 120 watt signal reaches us 100 metres away from the transmitter, the power level that touches us is less than one millionth of a watt.”

The non-ionising radiation we would receive from a 60 watt lightbulb 2-3 metres away will be more than a million times greater than that received from the 5G tower 100 metres away.

And as one commentator noted the only likelihood for any link between 5G and Covid-19 was if someone with the virus had used a 5G phone, left nasal or sweat droplets on the mouthpiece and passed the call on to someone else.