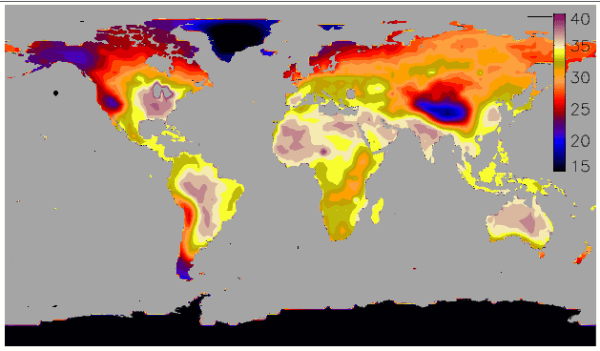 Too hot to survive

Any number of commentators have noted that coronavirus is just a ‘warm-up’ — no pun intended — for the dangerous and deadly health, social and economic impacts of global warming.

Just take the heat itself.

New research reported in Science Advances talks about the increasing number of potentially deadly days we face as a result of global warming — when ‘wet bulb’ temperatures exceed 30C and turn fatal at 35C.

At TW 35C, the human body cannot evaporate the heat it is generating internally (ie, can’t sweat), resulting in heat damage to the body … heat stroke — even if the person is in the shade, has plenty of water and is not exerting in any way.

The study indicates that with global warming we are getting closer and closer to wet bulb 35C days, including in areas that are already politically volatile and dangerous: “Results suggest that, under the business-as-usual RCP8.5 emissions scenario, TW could regularly exceed 35°C in parts of South Asia and the Middle East by the third quarter of the 21st century.”

The study found that TW readings of 33°C have come 80 times, and 31°C have occurred about 1,000 times, reaching beyond the Middle East and southern Asia. “Our survey of the climate record from station data reveals many global TW exceedances of 31° and 33°C and two stations that have already reported multiple daily maximum TW values above 35°C. These conditions, nearing or beyond prolonged human physiological tolerance, have mostly occurred only for 1- to 2-hours’ duration. They are concentrated in South Asia, the coastal Middle East, and coastal southwest North America.”

The report concludes: “The southern Persian Gulf shoreline and northern South Asia are home to millions of people, situating them on the front lines of exposure to TW extremes at the edge of and outside the range of natural variability in which our physiology evolved. The deadly heat events already experienced in recent decades are indicative of the continuing trend toward increasingly extreme humid heat, and our findings underline that their diverse, consequential, and growing impacts represent a major societal challenge for the coming decades.”

Note that there’s no bubble, no self-isolation, no virus that protects human beings from “TW extremes at the edge of and outside the range of natural variability in which our physiology evolved”! 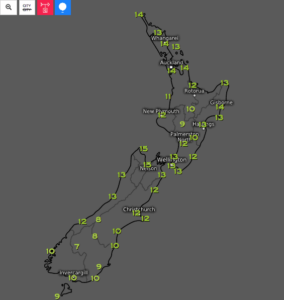 How close are we in NZ to the TW level of 35C? Not likely to  occur.

Here in NZ, five of the past 10 years have ranked somewhere in the top 10 warmest years on record – including 2016 which was New Zealand’s hottest year on record. This year, 2019, will join that list and almost certainly sit among the top five hottest (all as measured just Celsius or Fahrenheit). The top recorded air temperature in NZ has been 40C.

Even so, our wet bulb levels sit in the teens or lower. In Sydney and Melbourne, even during the hottest weather, the wet-bulb usually peaks in the low 20’s C.

Wet bulb temperatures for NZ can be followed here. And the chart above shows the TWs across NZ on May 12th.

But millions of other humans on the planet won’t be so lucky (nor will other species). And when that begins to happen with regularity, coronavirus will seem like a day in the park.