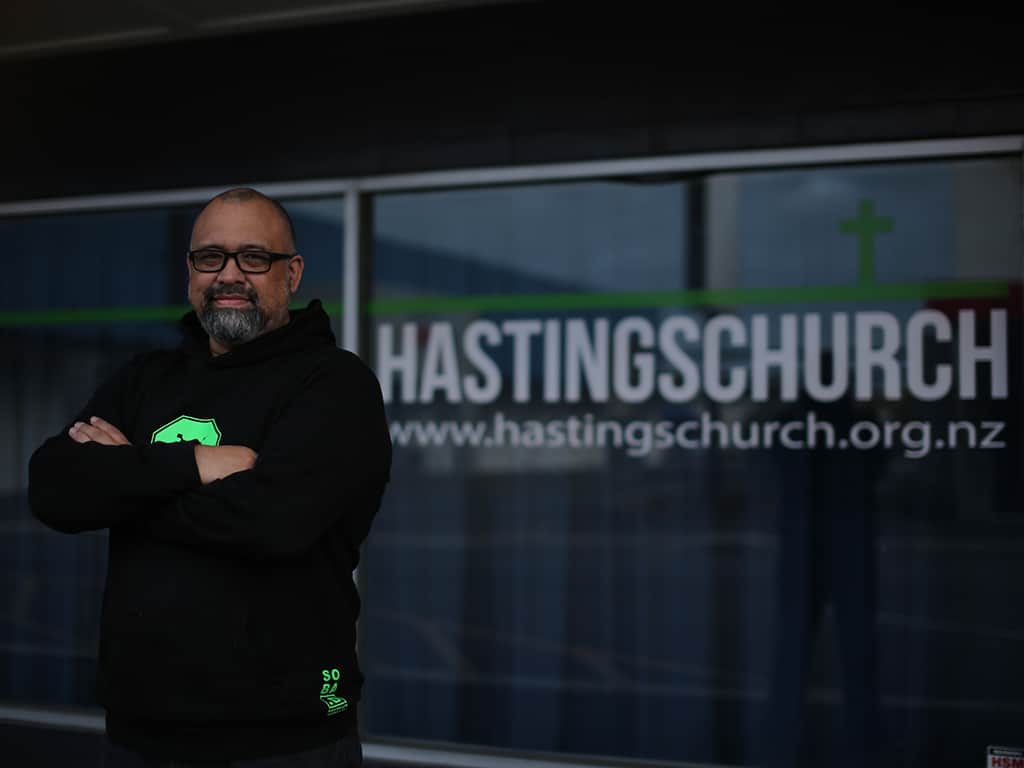 Up to 20 homeless people in Hastings were falling through the cracks a week and a half into Level 4 lockdown when Hastings City Council took up the offer of local minister Warren Acraman to coordinate their food and accommodation.

Hastings mayor Sandra Hazlehurst says her council had been working with Government agencies for over six months to find them a place and coordinating with Housing First to employ Mr Acraman to care for them was “a solution to a problem that was taking a real toll”.

A number of ‘chronically homeless’ had been coming to the Heretaunga St East premises of the Hastings Church on Sundays for a shared meal with the congregation and attending the drop-in centre during the week for about five years.

However, Acraman and his team had “a bit of a panic” when Level 4 lockdown hit and people were still hanging around hoping for some help, but the church was unable to engage as they couldn’t get an ‘essential services’ permit.

“We knew people were relying on us and even a week and a half into lockdown no-one was looking out for them,” says Acraman.

Things changed when Hastings group manager communities and facilities Alison Banksresponded to Acraman’s letter to the mayor, hooking him up with the Government’s Housing First operation in Napier which needed someone on the ground in Hastings.

Housing First secured units at Hastings Top 10 Holiday Park and Acraman had 10 people located from day one. Then he mobilised his church team with a food preparation and delivery which continues to provide them with three meals a day.

“We hit the ground running and ended up being contacted by probation officers and the courts to help out with people being released from prison who had nowhere to go and medical professionals who were looking for help with some of their clients.”

Acraman and the team at Hastings Church, primarily operating off donations and volunteer effort, are currently looking after the needs of at least 20 people.

He’s uncertain how that arrangement plays out after Level 2. “We’re still in discussion about that. The intent is not to create a sudden dispersal back onto the streets. We need to manage that properly.”

Warren Acraman, who was part of the HDC information technology team for seven years before training as a minister, took over the Miracle Centre then run by his parents Dennis and Mina.

His career change was an opportunity to express his faith in a specific and local way by connecting with those who had immediate needs. “Homeless people who wander around on the street are often overlooked unless they do something that’s annoying.”

He, his wife Sarah who is a nurse and their young family began looking more at the social justice side of things “rather than the religious traditions”, resulting in a change of culture for what is now known as Hastings Church.

It began with everyone bringing food for a shared meal after services and opening a drop-in centre during the week. We wanted to avoid the feel of an organised “feeding programme”, which could reinforce the “we’ve got it together and you’re the one with the problem” approach.

That was a turning point for him and many in his congregation who struggled with starving people “grabbing as much food as they could get, then hiding in a corner to eat it”.

He began asking church members what it might feel like if they were in that situation. “We’ve lost about 50% of the congregation over the last three years as the number of homeless increased.”

On Mondays they would typically get around 40 people but on other weekdays it averaged between 15 and 20.

It was gratifying, he said, when others learned of the need during the Covid lockdown and began donating food and other items. Peak Vision Church “produced a mountain of baking and delivered it to us”. Bayley’s Real Estate in Havelock provided sets of clothing and other organisations contributed as well.

Housing First and Hastings Council are continuing to look at ways to provide accommodation for the homeless. “One of my dreams is to re-create night shelter for Hawke’s Bay,” says Acraman.

There used to be a shelter about 40-years ago, but it closed after facing similar challenges to those being negotiated today. “It’s not necessarily the lack of housing, but the complex needs of the chronic homeless, including substance abuse and mental health.”

What’s needed is more of a wraparound service, he says.

While the resources are there, Acraman suggests there needs to be improved co-operation and collaboration between agencies.

“You’ve got Mental Health, Housing First, Housing and Urban Development, WINZ, the Ministry of Social Development, Police and different others, but coordinating them all is a challenge.”

And all the paperwork required just getting someone into the Top 10 Holiday Park came as a shock to Acraman. “I just wanted to get people off the street and get them fed.”

Another challenge he has come to accept is that there aren’t a lot of success stories in dealing with the ‘chronically homeless’.

“We don’t expect them to go on and become successful businesspeople. It’s about easing the suffering of people who are really struggling, regardless of how they got there,” says Acraman.

“Our place and role in the city is meeting the needs of those who have the hardest challenges to face.”