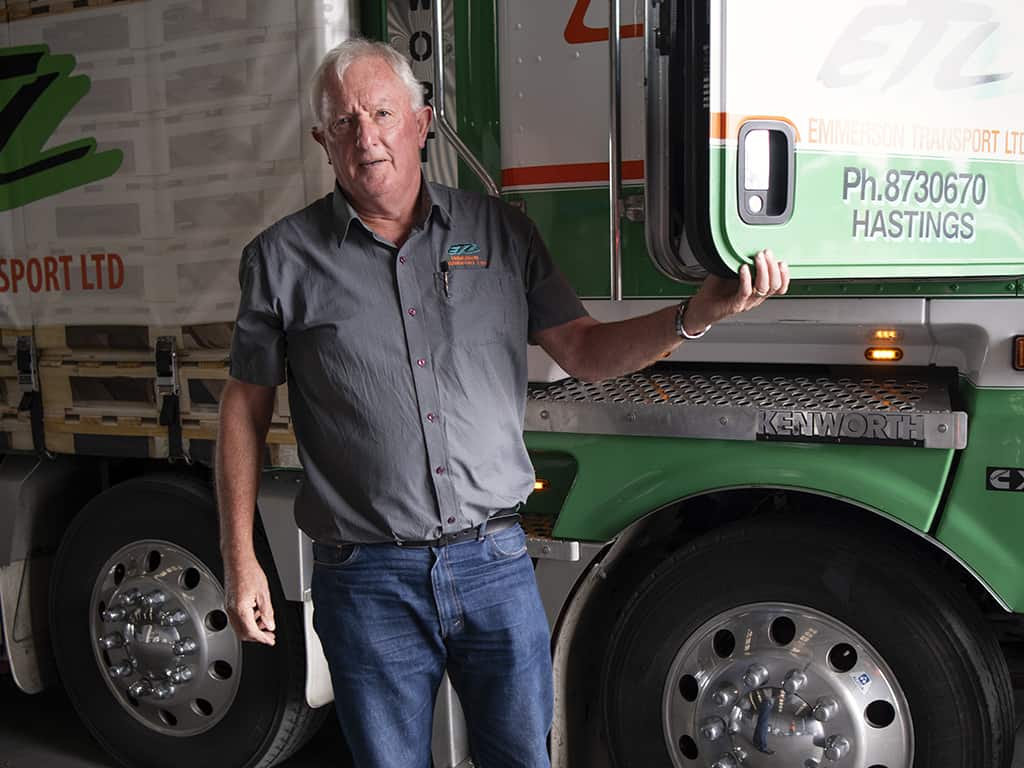 Those facing Covid-19 retrenchment may like to consider retraining for a life on the road.

Carting the region’s domestic and export cargos offers big opportunity as the heavy transport industry gears up for year-on-year growth.

There’s a desperate demand for those who can handle big trucks to help ease the pressure on an industry currently short of around 2,000 drivers across the country.New Zealand Road Transport Association regional president Ian Emmerson says many big rig drivers are working longer hours than they need to and accruing holidays to keep things moving.

There’s plenty of room for new blood as long as they’re passionate and not just looking for a convenient stop gap measure.

He says Hawke’s Bay is more dependent on heavy transport than most main regions. “Our feed from Dannevirke to Gisborne has no direct rail link with the northern sectors. Everything comes by rail to Palmerston North and then has to be bought back up.”

Another reason why heavy road transport is more prevalent in the region is the demand for overnight delivery. “It’s the only way we’re going to get anything from Auckland, Hamilton or Mt Maunganui.”

The movement of primary produce, fruit and vegetables, processed goods from the numerous plants around the region – whether its hides, pelts, meat, or goods from Heinz Watties, for example – is all moved by truck because it’s time sensitive.

Emmerson says the region from Bay of Plenty to Gisborne and Hawke’s Bay is unique in the amount of produce grown, which has to be fresh and moved overnight.

Then there’s forestry and logging. “You have to get it out of the forest by truck and if it’s under 150km, it logical that you put it on the truck once and take it straight to its destination.”
Even it if it doesn’t go domestically, it goes to the port by truck.

While there’s good money in working long hours, Emmerson says from a management or ownership point of view “we would much prefer drivers working slightly less than the maximum hours and being able to relieve them so they can have their full holiday term.”

The big issue going forward is Government expectations of growing the economy, which will require a significant increase in the distribution of bulk freight, a lot more trucks on the road, and up to 4000 drivers.

“If we’re going to have to nearly double our movements in 20-years that’s an increase of about 5% per year and we can’t cart more by volume or weight because we’re at the maximum allowable threshold already.”

What’s needed says Emmerson is not only more people and trucks but for the industry to be more efficient and get some help from rail, even though “the gauge is too narrow to get big efficiencies”.

Emmerson says only trucks moving essential goods could operate until Level 3 and those who couldn’t operate have struggled, the worst hit being the logging industry, along with contractors trucking ‘non-essential’ bulk goods.

Loads such as roading material and metal and site works for building “went flat”. While most of those were back operating “as soon as the gun went off”, he says some of that work is being staged back in and some companies are still operating at around 85% of normal.

Emmerson says most finance companies and banks have been accommodating on deferred payments and extended terms, although he’s picking there will be some fatalities. And while many got government subsidies to keep employees, “a massive amount of capital was tied up in retention of equipment”.