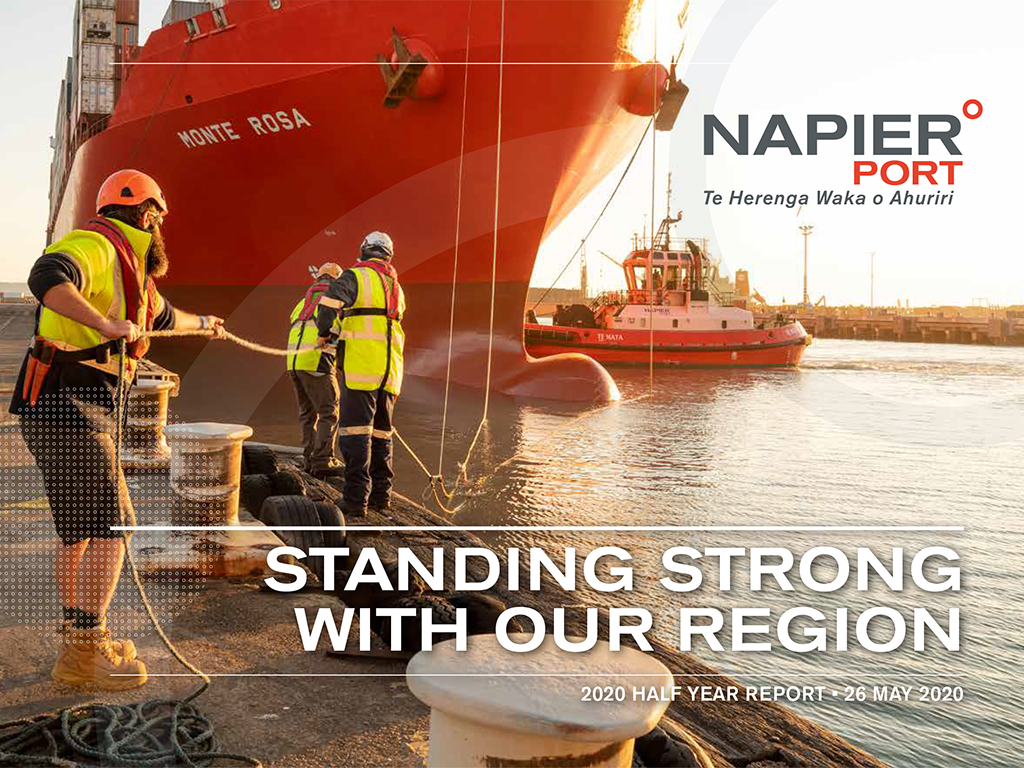 Our port released its half-yearly results today, which cover the six months through 31 March.

So while revenue was up 7.5% (reaching $52.3m) over the same period last financial year, with a net profit of $11.2 m, clearly the waters are today quite choppy.

Sitting in on today’s presentation to investors and media, the corporate message I heard was more or less … we were progressing well (no icebergs in sight), then the Covid tsunami capsized some boats, cruise ships and log exports took the biggest hit, construction halted on the new wharf, we got a $2m wage subsidy from the Government, and we’re canceling our mid-year dividend payment.

A brief verbal updating comment indicated that cargo volumes were down 40% in April, with revenue down 29% for the month.

The good news: operationally, the Port functioned very well despite the health-related precautionary constraints, our meat and produce exports (apples, squash) have kept up, and log exports are coming back in May.

The biggest news for Hawke’s Bay ratepayers and investors is that the Port is canceling its interim dividend, which would have been about $5m. This will clip revenues for the majority-owner HB Regional Council.

Port officials were circumspect regarding how this might play out at year-end, when the Port Board — looking at the situation “holistically” — will make a final decision on whether to pay any dividend for this financial year. An official noted that it might not be a ‘good look’ to accept a $2m wage subsidy from the Government and then turn around a make a dividend payment to investors (think Goldman Sachs here, not mom & pop in Taradale).

It was also noted that the $2m could be returned to Wellington if subsequent analysis indicates the Port did not in fact suffer the 30% revenue loss that triggers relief.

Despite being deemed overall a ‘lifeline asset’, the Port was forced to stop construction on its new wharf (deemed ‘non-essential’ by the Government, contrary to the importance we locals place on it) during Level 4, having spent about $8m thus far on the project. However, officials indicated that project would now ramp-up again, with an estimated $25m-$35m to be spent in the balance of the year.

Investment firm reps calling into the presentation asked about the cruise situation. I thought the responders sugar-coated the issue. Cruise revenue ($4.2m) was indeed up for the period, reflecting 10 additional ships over the prior season. However, there were also 11 cancellations at the end.

Cruise ships are presently banned by the Government. The Ruby Princess cruise ship that slipped into Napier at the very last pre-lockdown moment (see our coverage, Tale of the Ruby Princess), which resulted in HB’s most serious Covid spread (and brought even more illness, including deaths, to Australia where the ship next docked), should raise serious questions about the ‘net value’ of any cruise visits for the foreseeable future – and by that I mean the next 2-3 years. Would a major virus outbreak affecting the people of Hawke’s Bay be worth the $4m revenue to the Port?

The Port commented directly to BayBuzz: We agree that there is a lot of uncertainty surrounding the cruise industry and the timing of its revival. Cruise lines are currently banned from entering New Zealand waters until the end of June, and we don’t know when the Government will re-open the border. Additionally, there are numerous public health issues – both onshore and on the vessels – that will need to be worked through to revive confidence in the industry. We will continue to watch this space to see how the industry is going to respond to the significant challenges it faces.

The inconvenient dividend and cruise matters notwithstanding, the Port seems in good hands. It protected its workers and served the community well through what, hopefully, has been the worst of our Covid experience, at least from a health/safety perspective.

“We have great confidence in our ability to extend our long record of success, aided by the resilience and commitment of our people, and the determination we share with our customers to build a thriving region.

We are a rock standing firm in the sea.”