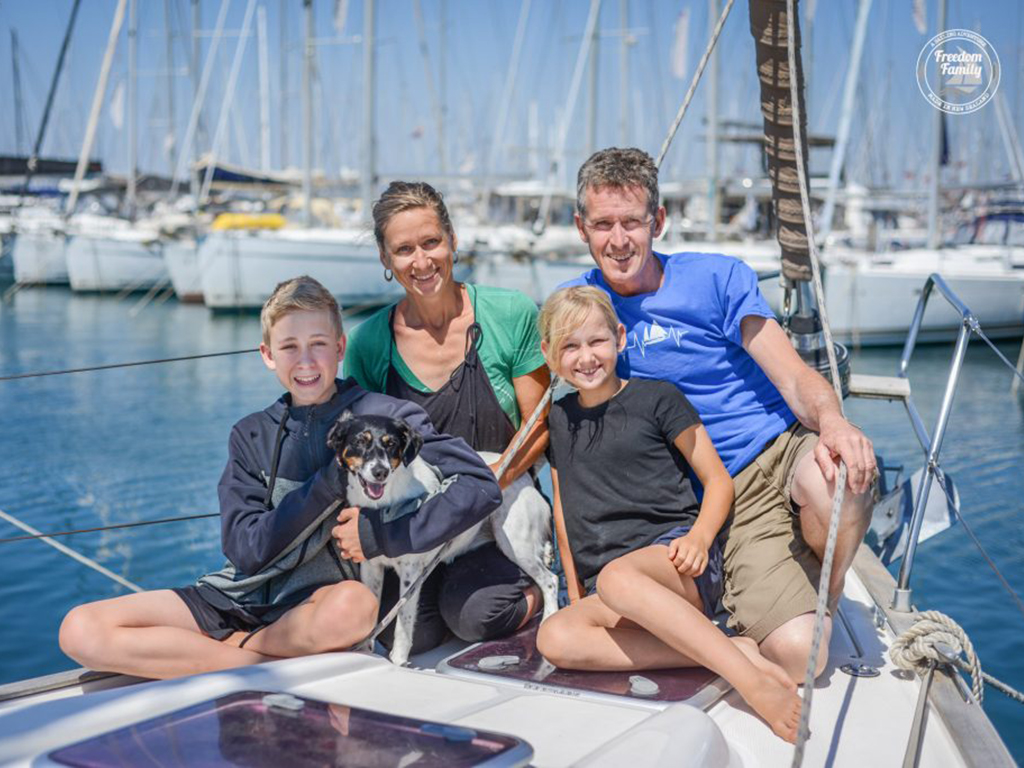 Former BayBuzz photographer Tim Whittaker, his wife Silke and two young children have been caught in political limbo in Greece facing large fines and costs through paperwork and visa glitches caused by the Covid-19 lockdown.

The Whittakers had planned to sail around the Mediterranean and the world on their newly acquired seagoing yacht but a final export stamp on their paperwork had meant their yacht can’t leave Greek waters.

Whittaker, well known for his professional photography, drone footage and more recently his Hawke’s Bay real estate images, says Greece is the only country with a boat tax, and that’s where the hold up has occurred.

“Our yacht had been registered through Maritime NZ but the documentation hadn’t been exported from the Greek system which simply required a stamp of approval.”

They’ve been locked down in the Alimos marina in Athens accruing fees and facing threats of extradition because Tim’s visa has now expired.

“The Greeks continue to say they’re working from home and don’t have a computer even though restaurants and cafes are now open,” says Tim.

The Whittakers had budgeted to stay in the marina for one night each month once they had begun their adventures, but have now been at Alimos for over 90 nights despite appeals for help to Greek agencies, and New Zealand and Greek consulates.

“New Zealand was caring and concerned but could do nothing. The Greek consulate sent us a letter of support then began to blame us for not setting sail to Italy a month earlier to avoid the visa expiration despite the fact we were locked down, the marina was closed and Italy’s borders were also closed.”

“It’s been like ground hog day, but this time has meant we have settled into boat life and schooling routines but we are all itching to leave the marina,” says Tim.

The Whittakers were looking for a simpler lifestyle and to take their family on an adventure of a lifetime, but what they’ve experienced so far has been taxing in more ways than one.

“We wanted to get off the hamster wheel and spend some real quality time together as a family and with our children approaching the teenage years, time was running out,” says Tim.

Tim, Silke and children Luca, 13, and Nina, 10, sold their Hastings home and possessions and headed to Greece to pick up the 46′ Bavaria Cruiser sailing yacht they purchased when Tim was in Greece for two weeks around Christmas 2019.

Tim returned to Athens early March 2020 to prepare the yacht for the family, who only just made it out of New Zealand before lockdown because of their German passports.

On being reunited in Greece they picked up one of the last inbound passengers from Athens airport before flights shut down, their fox terrier Lucy.

Tim gained his ocean going confidence completing several New Zealand coastal passages and one to Tonga with his father who is an experienced sailor and spending many holiday and weekends on Lake Rotoiti with the family’s 26’ trailer yacht.

He sat two skipper’s courses in Auckland, gained his RYA ICC competency certificate and he and Silke both completed advanced first aid courses. A radio operator’s course was also required.

“We researched yachts all over the world and decided that due to our lack of ocean sailing experience the  Mediterranean was a good place to start due to the short distances between islands and countries.”

A broker in Greece who sent references from other Kiwis who had bought through him provided a range of options and a choice was made from a shortlist of eight. “I choose Polykandros, named after ancient Greek island, although the kids now call her Polly.”

After a sea trial, the 13,000kg yacht was lifted by crane to be surveyed on the dry with rudder, hull and keel put under the microscope. The marine surveyor’s report convinced him this was the best buy and the purchase process began.

The highlight of being stranded in Greece amid all the frustration, has been meeting people, including other yachties in exactly the same position, including another Kiwi and Aussie couple.

When BayBuzz contacted the Whittakers, their friends had just received their paperwork and sailed directly for Turkey.

“We did rent a car for couple of days and visited the Acropolis which was ghostly and empty of tourists and drove around the coast for an evening picnic at the Temple of Poseidon.”

Tim says the family remains committed to the adventure and has no plans to come back to Hawke’s Bay just yet. “When the yacht documents come through we may end up having to pay the fines and high tailing it to Turkey,” as it is a non-Schengen area.

Tim says it’s simply a case of bad timing. Under normal circumstances I’m sure everything would have gone a lot smoother. The biggest blessing is that we’re all together and well.”

The Whittakers’ aren’t wanting to pull the sympathy card. “While we’ve chewed through our savings quicker than we wanted, this is our pickle. Many have suffered through Covid-19 so we’re not unique.”

He continues to create videos for the family YouTube channel and some supporters are helping out through a Patreon page (www.patreon.com/freedomfamily)  and making small contributions toward the videos and equipment costs.

One response to “Bay family stranded in Greece”