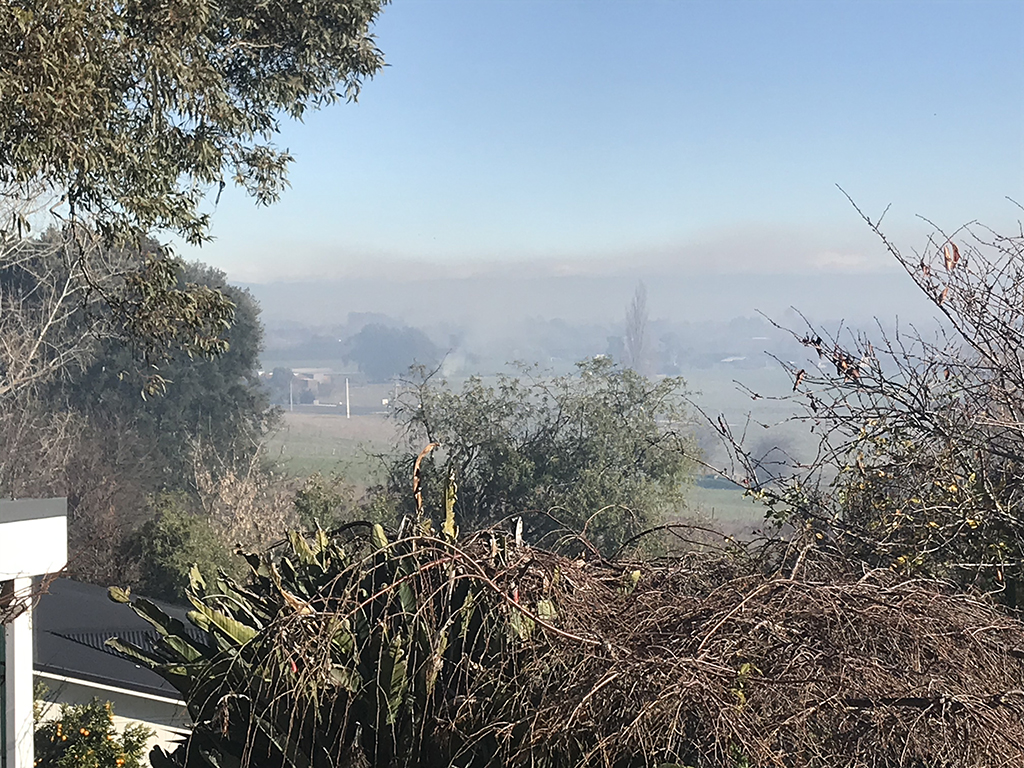 This photograph just sent to BayBuzz at 11am Thursday, 11th June.

The location is Middle Road at Gilpin, just outside Havelock North.

Some farmer/grower apparently thinks it’s totally acceptable to spew noxious smoke over a wide swath of his neighbours.

But as the person sending the photo (to BayBuzz and several public officials) says:

It is uncomfortable; it stinks, my eyes itch, it certainly won’t be healthy.

In this day and age, it is not at all necessary; there are plenty of alternatives

It is not an exception; it is a norm at this time of year – how is that allowed?

I want your assurance that you will have this nonsense stopped and look forward to  receiving your commitment to doing that.

If the law allows for it; change the law.  NOW.”

Editor’s Note: The day after we published this photo on the BayBuzz website and Facebook page, the HB Regional Council put out this media release, the guts of which is right here:

“Regional Councillor and orchardist Jerf van Beek says air should be safe for everyone to breathe all year round.

“Cold weather makes air quality worse. Before people burn anything outdoors we want them to think about their neighbours and community – fires shouldn’t be a nuisance to people around you,” says Jerf.

Outdoor burning isn’t permitted between May and August if your property falls within the Napier or Hastings airsheds says Jerf. Airsheds are designated air quality management areas.

“We check people are sticking to the rules with our Pollution Response team. The team responds to calls through our hotline – 0800 108 838 – and if people are found flouting the rules they can be fined up to $1,000 or prosecuted for more serious offences.”

An orchardist or any other burner saying today that they ‘don’t know the rules’ or don’t have better options is inexcusable — either wilfully ignorant or just doesn’t give a s**t.

My view is that this situation won’t change until an offending burner is burned, not just with the top fine, but prosecuted and publicly shamed. I’ve got nearly 5000 people on Facebook waiting HBRC!