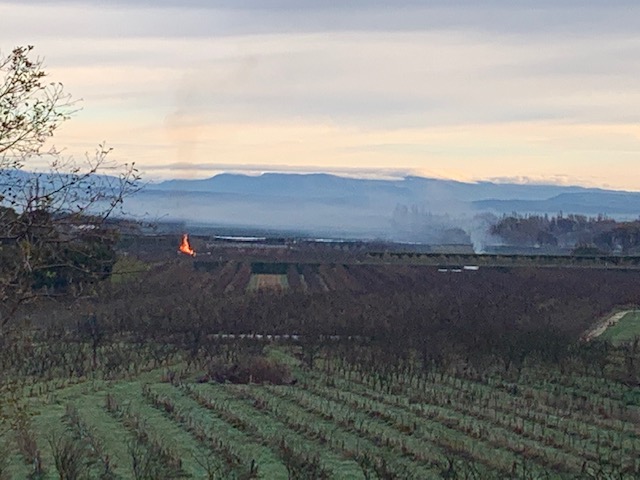 The last week or so has seen flagrant violation of the burning rules leading to numerous videos and photos floating around Hawke’s Bay websites and Facebook pages (including our own, here).

Indeed a dedicated image library could be created.

According to the Regional Council, air quality in Hastings exceeded the national standard for the first time this year on Monday, taking Hastings to its air quality limit for the year.

Per HBRC, “the average level of very small particles in the air over Hastings, measured at St John’s College, was seven micrograms per cubic metre above the acceptable level of 50mg on Monday.”

Everyone must understand that this is not a mere cosmetic problem.

It is a super-serious health issue — fine particulates (PM), the stuff smoke is made of, get inhaled and settle in the lungs. At the very least, asthma, colds and existing respiratory problems are worsened; at worst, these particles can lead to lung cancer. PM is poison.

That’s why government policy dictates that if we have too much PM in our air, we will be obliged to shut down the activities causing them. Just what we need facing the challenge of Covid recovery.

Again, per HBRC: “Air quality rules are set under a National Environmental Standard and allow for one annual exceedance up to an average of 50mg of PM10 (Particulate Matter smaller than 10 microns) over a 24-hour period.” Hastings was 7mg over the limit.

Orchardists, mainly, and farmers (both know the rules and know better) and the occasional ignorant lifestyle block owner generate the smoke that gets most of our attention, as its streams through the air are traceable back to an obvious source. And that smoke is bad enough.

But in fact, 87% of the health-damaging smoke still comes from ‘residential’ burning — that is, people using wood burners and fireplaces to heat their homes. And that smoke tends to settle down over our neighbourhoods at dark like an evening blanket … hence smoke dense enough at night to seem like street-level fog. And thousands of people must breathe the poison … to their detriment.

A major push over the last decade has seen thousands of homes in the Hastings/Napier airsheds upgrade their burners, and not always happily. But they’ve done it.

There is more upgrading to do, but there is also the need for residents to only burn the right — i.e., well-dried — wood.

Our urban woodies still need to, first, wise up about their own firewood, and then feel more justified in calling out our miscreant orchardists and farmers.

This is not an insoluble problem folks … it’s totally within our means and know-how to fix.

For the rules, go here: www.hbrc.govt.nz/environment/air-quality/burning/

For you big commercial burners, try the ‘monster muncher’ instead — Hogfuel!