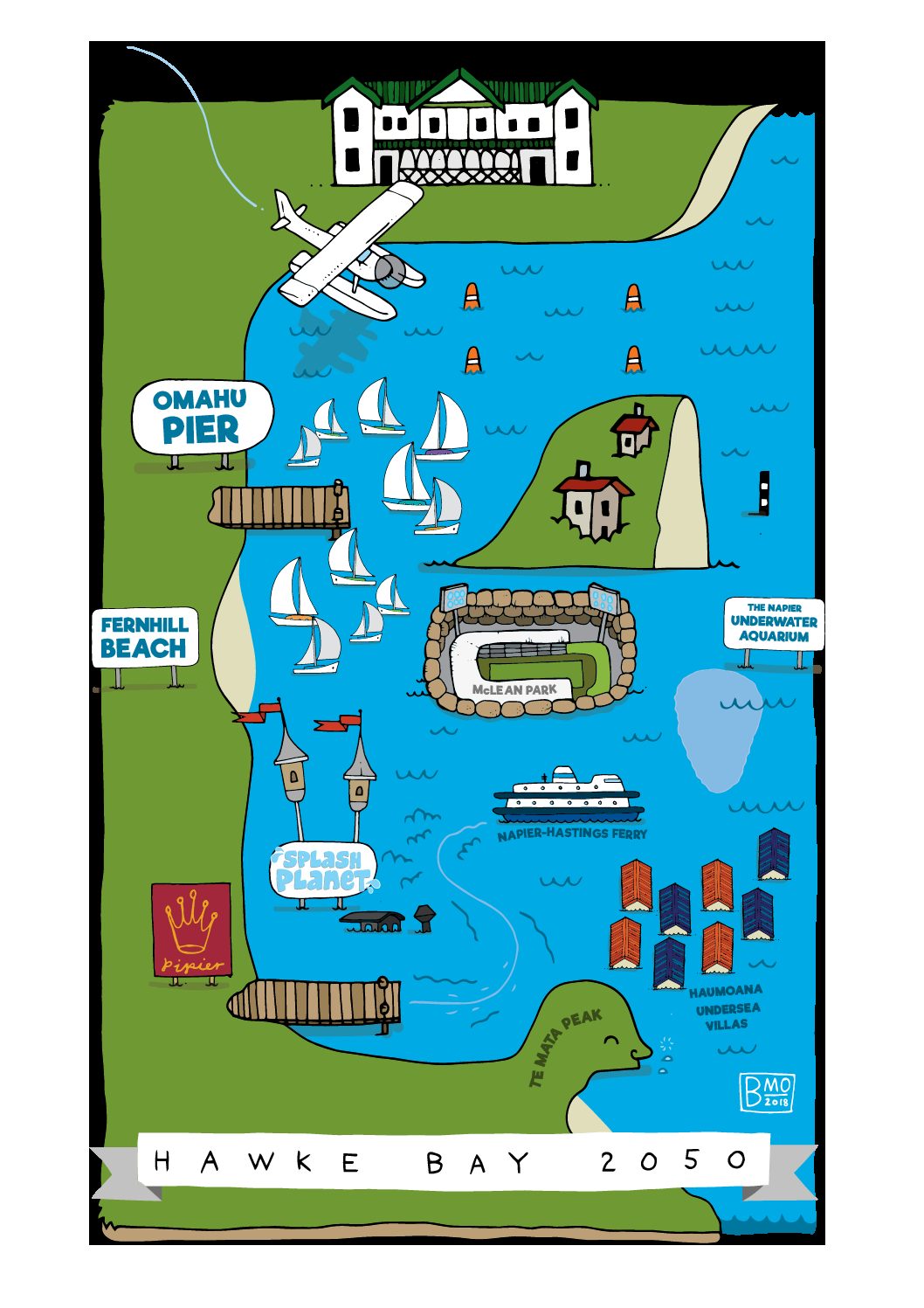 Napier: City under the sea

Way back in May 2011, we published City Under the Sea, a cheeky reflection upon the Napier City Council’s steadfast determination to approve homes to be built below sea level … think of Te Awa just for starters.

“Prodded by Mayor Arnott, who literally gushed with enthusiasm after researching firsthand in Amsterdam and Venice the delights of living below sea level, the (NCC) planning team has risen to the hydraulic challenge and developed a scheme called Growing Under Water (GUW).

“GUW envisions a partially submerged residential development with homes connected by meandering canals (this of course is the Te Awa development). Residents would leave their cars at the edge of the development, and use personal gondolas to pole around within the complex. Deluxe homes would have underwater viewing rooms to watch sea life purpose-bred for a life of entertainment in the complex by a rejuvenated Marineland. A special canal for high speed vaporetto would ferry GymSports enthusiasts from the village to the proposed Regional Sports Park …

“A major glitch in the planning has been the problem of sewage disposal in an area where the water table routinely would be higher than the first floor of most dwellings. Mayor Arnott has voiced major displeasure that planners haven’t disposed of this messy matter. She was heard to explode: ‘I’m sick of this mental constipation. If Venice can live in sh*t and still be a world-class tourist attraction, you can bet your a** that Napier can do it.’…

“Excited visitors arriving at Napier will get their first taste of the aquatic city when their plane ditches at a submerged Hawke’s Bay Airport and they board life rafts to reach the terminal. From there, just like in Venice, they will be ferried to Napier’s downtown docks at the upper reaches of Napier Hill. Visitors arriving by sea will disembark from submarines at the Napier Port. From there, gondolas and small submersibles will carry them through the city. “No more need for a carbon burning/emitting bus service between Ahuriri and Marine Parade,” said a frugal Mayor Arnott. Visitors driving from Taupo will board ferries at Eskdale.”

Why do I reminisce?

Because NCC and developers are still at it. The latest proposal is to build a 162-lot lifestyle village on horticultural land between Maraenui and Te Awa. If approved, the project could add 600 apartments and units to Napier’s future underwater environs.

Which reminds me of our faux exchange with Mayor Arnott years ago:

“BayBuzz asked Mayor Arnott why these plans have been kept secret from Napier ratepayers.

‘We wanted to avert panic,’ she said. “Napier homeowners who are perfectly complacent about living on top of toxic contaminants, as in Onekawa, or amidst sewage when it rains, as in Meeanee, might have an entirely different reaction to living underwater. These things need to be carefully managed.'”

One response to “Napier: City under the sea”