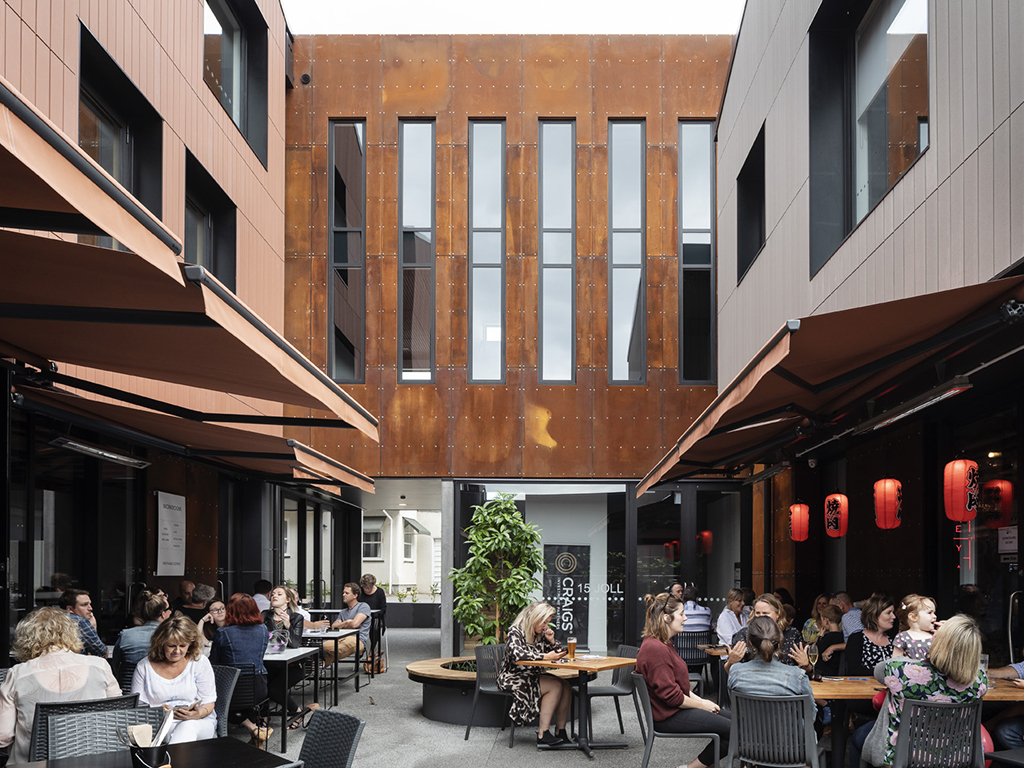 ‘Village within a village’ wins

The ‘Village within a village’ has won the commercial category award at the 2020 NZIA Architecture Awards for Gisborne-Hawke’s Bay.

During construction the three-storey building on Joll Road Havelock North raised a few eyebrows. Its height seemed out of character with the Joll Road streetscape and the windows and cladding seemed rather austere. The building opened in 2019 and the mutterings are forgotten as the community enjoys the building with its cafes, bars and restaurants.

It is the design of RTA Studio, an architectural practice that has opened a branch in Havelock North. Lead architect David Wright says they were well aware that this project would be the first three-story structure in the locale and were determined to ensure it was contextually appropriate. A critical idea was to create a ‘village within a village’.

Passers-by might be surprised to learn that stage one is made up of only two buildings. That’s because the forms are broken up into offset gables that not only shift in height from one to three storeys, but featured cladding in different yet complementary colours. “This really helps to scale down the mass,” explains RTA architect and founder Richard Naish.

Clusters of buildings create pockets for sheltered courtyards that are set well away from the street so that Joll Road becomes a precinct where locals can meet, do business and support the retail and hospitality outlets that occupy the ground-floor. “This is architecture with a sense of place that enhances amenity for Havelock North’s residents and shapes a sense of community” said the Judges of the Commercial Category at the 2020 NZIA award.

In working up the master plan, RTA Studio employed a network of pedestrianised laneways to run between the buildings and make the experience more porous. “We wanted to evolve and extend the high-street,” says Naish. “It’s a lively, activated zone that knits together the CBD with the residential neighbourhood on its fringe.”

Joll Road is the first project off the block for the studio. Stage one of the four-stage development by Murrayfield Properties Ltd was constructed by Havelock North-based Gemco Construction and completed in October 2019. Occupying space within it made sense on a professional level but, Wright acknowledges, there’s also the upside of having retail and eateries on the doorstep. “There’s the coffee roastery, a Japanese bar and restaurant and Alessandros which, according to food critic Jesse Mulligan, serves New Zealand’s best pizza.”

One response to “‘Village within a village’ wins”