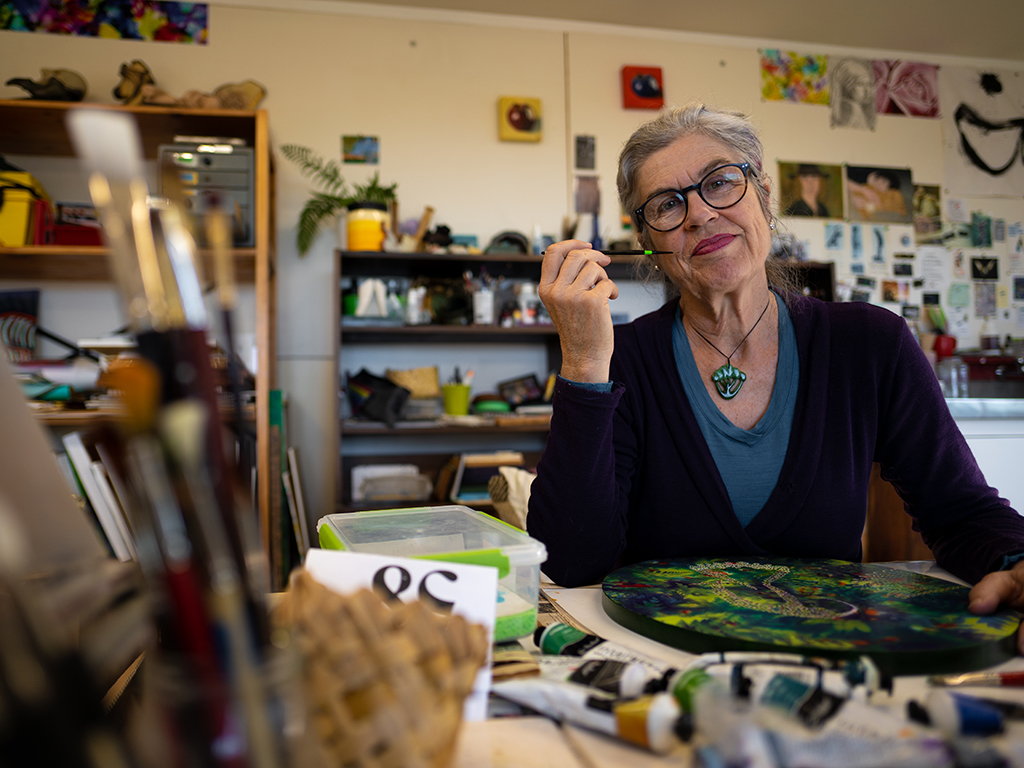 The Prime Minister made her announcement on her second visit to MTG in Napier on Queen’s Birthday Weekend, and indicated the Government predicts that the arts sector will be twice as hard hit as any other sector. “The arts and culture contributes nearly $11 billion to GDP and employs 90,000 people.” She strongly acknowledged the flow-on effects that a healthy creative sector has for other important parts of our economy.

The money will be spread widely over the creative sector to support music, performing arts, creative design and visual arts and includes support of music venues and creative job seekers. It will especially benefit the regions in the wake of the Covid-induced recession.

Curator at MTG, Toni Mackinnon says, “I think [the Government] has been pretty smart in their distribution of funding.” In a two-pronged approach, funding has been allocated to ‘umbrella organisations’ such as The Museum of New Zealand Te Papa Tongarewa, and Heritage New Zealand Pouhere Taonga, which have a legislative responsibility to support smaller galleries, museums, archives and artists right across the country.

An additional injection of contestable funding is aimed at individual artists and organisations, for logistical support, innovative projects and job creation. This money is where ground-up initiatives will play an important part in the creative industry’s recovery and will see $70 million spent on a Creative Arts Recovery and Employment Fund over three years.

At the beginning of lockdown, Creative New Zealand, the national arts development agency, acted nimbly to rearrange their existing funds to provide emergency relief grants for individual artists and an arts continuity grant for organisations forced to halt planned events. The grants were well-subscribed and when taken with the wage subsidy for the self-employed, early losses due to lockdown were addressed.

Creative NZ then received $25 million from the Government to support artists in all forms.

At the time of writing it is uncertain how much of the funding will come to Hawke’s Bay. Normally, CNZ’s regional funding is allocated through the Creative Communities Fund to which community arts groups apply by making submissions and receiving allocations. Individual artists and creative arts organisations can also apply directly to CNZ for a range of grants to cover different projects.

To fully benefit from the new investment, we must look to our five local authorities to support the arts community to come up with a range of initiatives to draw our share of these funds into Hawke’s Bay arts. It’s an opportunity not to be missed.

Ngā Toi Hawke’s Bay is a volunteer advocacy group that lobbies for funding to councils and other agencies, looking to arts communities for initiatives to promote. Until now a lack of funding has prevented them from playing a more effective leadership role in the arts of Hawke’s Bay. Hopefully this will be addressed.

Dick Grant is the Ngā Toi Chair. He says, “Ngā Toi’s rôle is to continue to lobby at national, regional, and local levels for ongoing support for the arts, not just broad advocacy work, but also work on getting detailed plans, particularly from the Hastings and Napier councils, for practical outcomes. The councils will have to consider their arts and cultural spending in the light of restricted budgets. Creative New Zealand has set up emergency funding … but councils too need to get in on the act.”

“We need to hear from the sector in what practical ways we can help them beyond our ongoing lobbying,” says Grant. “Amongst these might be ideas like sponsoring/supporting an exhibition for local artists. Another is making Tourism HB aware of the value of the wider arts sector to provide things to see and do to encourage tourism. The biggest problem of all is going to be to find the money to inject into arts and cultural programmes that make this a reality,” he says.

Practising artist Rosamund Stewart is a long-time member of the Ngā Toi board (formerly Creative HB) who points to Creative Waikato as an example of what other regions are doing. “Creative Waikato has a budget of $800,000, it employs eight staff and represents all council districts in the wider Waikato region, including Hamilton City. By contrast, in Hawke’s Bay each Creative agency is attached to its own local authority making it extremely difficult for regional advocate Ngā Toi HB to make headway,” a major reason why the Waikato councils collaborate to fund Creative Waikato.

Bowen Gallery co-owner Penney Moir, says, “Lip service is paid to the arts community, but it’s an ongoing battle to get financial support from local bodies. Visual arts, music, theatre, literature contribute hugely to the local tourism dollar take in New Zealand. A small funding contribution in the form of a grant makes an enormous difference to the viability of an arts event.

“But to achieve that financial support takes a lot of effort and jumping through hoops,” says Moir, “yet the spend that is generated around arts events supports local administrations and boosts a community’s vitality.” Moir’s view is based on her Wellington experience but is equally valid here.

The Hastings City Art Gallery (Te Whare Toi o Heretaunga), after months of not having a director, followed by the lockdown, is now fully in action with newly installed curator Clayton Gibson in place. The proposed interactive (and tactile) exhibition Connect the Dots was postponed until next year and instead, Local Lockdown fills its slot. Here Gibson has invited 16 local artists to present work created during lockdown. This is followed by EAST, the biennial exhibition featuring Hawke’s Bay-connected artwork. 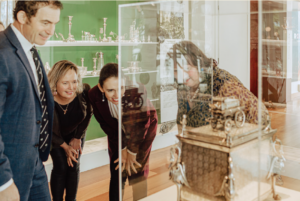 Private gallery owners say sales are seriously down, although some report sales to locals redirecting their overseas travel budgets. Napier’s Richard Boyd-Dunlop says his gallery is missing the tourist dollars and his online sales don’t make up the shortfall. The galleries and independent working artists who worked really hard on their online presence did make some reasonable sales though.

The transition into online marketing is very pronounced since the advent of Covid-19 and no doubt that is the way forward for the art market, just as it is with other business sectors.

Kaye McGarva of Muse Gallery says, “In some ways it is still a little early to see how the fallout from the Covid-19 pandemic affects our business. Art projects were put on hold by the restrictions, but in the first two weeks at Level 2 we saw strong sales of art. Our sense now is that is starting to slide a little, but then normally over winter we see a slowing of sales anyway.” Muse presents its first exhibition in early July under Level 1 showing local artist Richard Brimer, with a full schedule of exhibitions for the rest of the year.

McGarva sees the role of her gallery changing. As part of Muse’s new focus, she is working on two projects outside the gallery that will promote their artists and be of benefit to the community. By working more closely with the community Muse is also striving to get closer to their online audience. The upgrade of their website will include the facilitation of online sales. 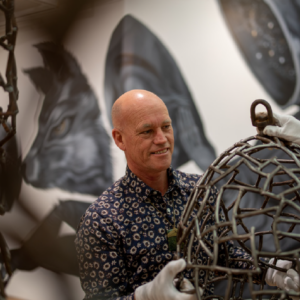 It is great to hear that plans for the Wildflower Sculpture Exhibition 2020 are going ahead with the wildflower seedbeds prepped and sown and the team at the Russell’s Round Pond Garden preparing for the bi-annual event. Sculptural artists will have their projects underway by now and looking forward to this ever-popular event.

Another family initiative for the arts is UKU, the bi-annual ceramics award open to potters and ceramics practitioners from around New Zealand. This year organisers Annette Bull and Natham Crossan have been invited to join the Hawke’s Bay Arts Festival programme in October, with the awards exhibition being the star attraction at the Arts Inc. Heretaunga’s Russell Street gallery.

Pitsch Leiser of Arts Inc. Heretaunga is the festival director of the Harcourts Hawke’s Bay Arts Festival, the annual celebration of performing arts. “The HBAF stays in its October slot,” he says. “However, the programme format will be focused on national and local productions due to international travel bans,” and he sees it as a unique opportunity to collaborate with a diverse range of performing artists connected to Hawke’s Bay.

Also in October, timed with the Blossom Festival, a large-scale cherry blossom sculpture will be revealed in the Landmarks Square on the corner of Warren and Heretaunga Street East. It is designed to be interactive so that it can be climbed through and over, an attraction to children and families. The Landmarks Trust commissioned local sculptor Philipp Meier to design and construct the sculpture as a tribute to the late mayor of Hastings, Jeremy Dwyer.

The Prime Minister’s announcement presents our region with opportunities to enhance the quality of life through the arts in the face of Covid-induced economic hardship. Everyone involved in the arts sector needs to step up, offer and share ideas, and to speak up, working together to show our councils and funding agencies what we can do and what we want from them.