HB tourism down, but not out

As published in July/August BayBuzz magazine

Shop fronts are dark and shuttered. A sole, art deco-themed tumbleweed rolls down the paving stones, bouncing off bollards and the bronze statue of the lady walking her greyhound, both adorned with surgical masks.

Given the level of economic doom and gloom that some are prophesising, you could be forgiven for thinking this might indeed be the reality for our region as we recover from the effects of Covid 19.

During the month April 2020, in the midst of Level 4 lockdown, Hawke’s Bay’s MRTE (Monthly Regional Tourism Estimate) spend was $5 million. The same time last year it was $57 million.

International borders are closed and look to be for some time – potentially until a vaccine is found, which could still be 18 months to two years away.

Whatever the ‘new normal’ is, we’re in it for some time. 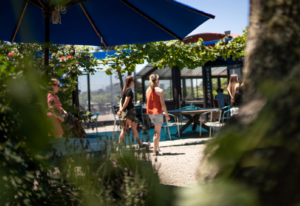 The Nimons buses had nowhere to go.

The Art Deco Trust is scaling back operations and considering a restructure affecting its paid staff. But around 120 volunteers who staff the organisation’s shop and take the CBD tours should help retain some income for them, albeit severely reduced.

As the pandemic fallout persists, more businesses and people are likely to be suffering financially. Given its reliance on international visitors the tourism sector is expected to take some of the biggest hits.

The Government’s income support subsidy has helped keep many businesses afloat during these uncertain times, but when this support ends things may get a lot tougher.

But for Hawke’s Bay, at least, things are not all doom and gloom.

For New Zealand’s tourism sector things could have been a lot worse.

Kevin Murphy, Napier City Council’s Events Manager echoes the thoughts of Saxton when he says, “We were very fortunate, while there was obviously lots of disruption, the timing couldn’t have been better – of the 35 events we supported this year only a few were affected by the Covid-19 restrictions.”

He notes trades involved in the events industry, like lighting and sound technicians, have taken the biggest brunt of the downturn in his sector, with a large chunk of their year’s work and income disappearing overnight when the restrictions were announced.

“Events are the first casualty and the last to come back in a situation like this. Ninety percent of the events we support would have had to wait until Level 1. The biggest challenge was not knowing when that would be.”

The national event industry is currently waiting for their sector’s minister, Phil Twyford, to make a funding announcement, like the “rescue packages” that have been announced for the arts, tourism, and horse racing sectors.

“The event sector drives a good percentage of New Zealand’s domestic tourism, so summer will be full noise!”

The Bay of ‘Plenty Opportunities’

While Covid 19 and lockdown saw a lot of disruption for Hawke’s Bay’s wineries, coming at the height of the best vintage in years and after six months of record trading for Te Awanga’s Clearview Estate, co-founder and proprietor Helma van den Berg still sees positives in the changes and opportunities ahead.

“I want this ‘new normal’ to be a ‘better normal’. Covid-19 is a brilliant opportunity to reset,” she says.

“We have reset the restaurant and cellar door model with reduced days and hours, a smaller, more relevant menu of Mediterranean influence, while lifting the service and hosted seated wine tastings.”

Some of the government-instigated changes around how restaurants must operate under Covid have played right into Clearview Estates plans: “Safe, Seated, Separated, Single Server” has added to the high-end level of service that Clearview Estate targets.

From Queen’s Birthday Weekend reactions these changes appear to be working – one online review noting those ‘five S’s create a ‘four W’s’ experience: “Welcoming, Wonderful and Well Worth a Visit!”

Helma credits her key staff with getting through lockdown. She also notes the assistance of the Government’s wage subsidy, regular updates from the Restaurant Association of NZ and Hawke’s Bay Tourism, and the Eat Local eat-out-at-home campaign championed by the likes of Bistronomy’s James Beck.

Hawke’s Bay Tourism Association chair Hamish Prins is effusive with his praise for Hawke’s Bay Tourism’s work during the lockdown and the positive opportunities the recovery presents. “We were all cut off at the knees when lockdown was announced. But the work Hamish and his team have done and their communication has been amazing. Hawke’s Bay is coming back quicker than other regions because of their work!”

It’s not just government departments that have been helping out Hawke’s Bay. Our region appears to have some big backers!

When travel restrictions were eased, one of the first destinations mentioned was Hawke’s Bay – Prime Minister Jacinda Ardern saying, “It’s OK to drive from Wellington to Napier to see family”.

And indeed on Queen’s Birthday Weekend the PM’s own first holiday stop was Hawke’s Bay – announcing recovery funding for the arts sector at Napier’s MTG, then spending the weekend relaxing and shopping around the region.

Says Hamish Saxton, “I like to think the work we put in to make Hawke’s Bay a top destination for domestic tourists during this time was a big factor in the PM visiting.

“We were one of the first regions talking about our intentions and developed the ‘Bay-cation’ campaign early on, particularly targeting people from Wellington and Manawatu/Whanganui … Looking at some of the early results from Queen’s Birthday Weekend, it looks like that work has already begun to pay off!”

Building on that, HB Tourism has now secured $700,000 of the $20.2 million the government announced it is making available to NZ’s 31 Regional Tourism Organisations in June for destination management, marketing and planning.

One of the biggest points of tourism contention for many Hawke’s Bay locals in recent years has been the cruise industry.

Passengers cruise in, dock, stroll around Napier’s CBD, are bussed out to wineries, or pre-organised tours, return to the ship and cruise out again.

But when Coronavirus was making its presence felt in Australasia one of the first moves was closing borders and banning cruise ships, which were quickly becoming a hotbed of transmission for the disease.

A Covid-19 ‘cluster’ of at least 13 people in Hawke’s Bay resulted from a visit by the Ruby Princess on 15 March.

With many cruise ships around the world still quarantined in Covid-19 limbo, it would appear the industry might be doomed.

“NZ’s cruise trade isn’t dead. I don’t know what next cruise season will look like, but the port is still holding cruise bookings, so it’s a case of wait and see.”

Adding, “11% of passengers on cruise ships around New Zealand are New Zealanders, so there is market there of Kiwis who want to view their country differently.” And 49% are from our bubble-friend, Australia.

According to Tourism NZ, Australia is New Zealand’s largest international visitor market, accounting for almost half of all international visitor arrivals. New Zealand and Australia governments are progressing a ‘Trans-Tasman Bubble’, where we open our borders to each other, but no one else, but obviously Australia’s latest Covid re-surge throws a spanner into that possibility.

So until then (or a Pacific Island bubble), we must rely on domestic tourism. Fortunately, there is still a fair bit of money in that. “People are still flying, having holidays, staying in hotels” says Hamish Saxton.

Each year domestic tourists – New Zealanders travelling around NZ, who make up 75% of visitors to our region, spend $500 million in Hawke’s Bay.

The closed “bubble borders” overseas provide a much bigger earning opportunity. New Zealanders spend $13 billion each year on overseas travel. That’s billions with a ‘B’ and several more zeroes than has historically been spent domestically.

With nowhere else to go but around the country, imagine the potential economic windfall that could boost the economies of regions who promote themselves well enough.

Here’s hoping a “Bay-cation” becomes a must-do on many people’s travel plans!

One response to “HB tourism down, but not out”