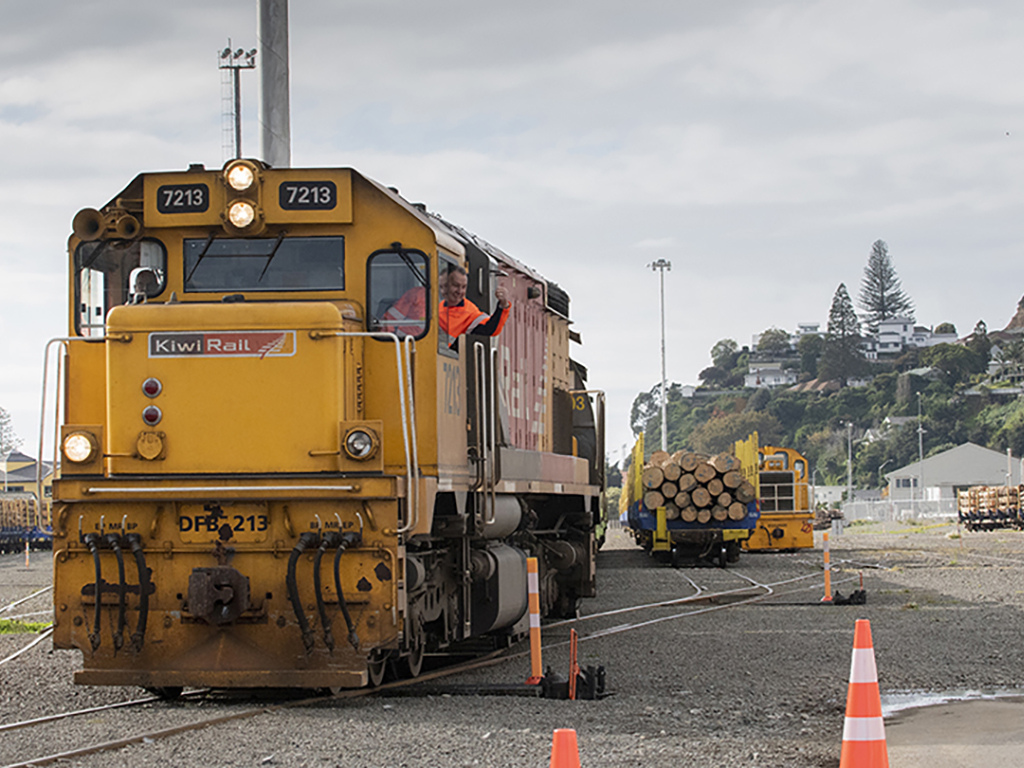 Sitting at railway level crossings will be more common come October, when the ‘wall of wood’ being harvested on the East Coast starts descending onto Napier Port.

Logging freight trains on the Napier to Wairoa line will start that month, with initially two return trains each weekend. Each train is expected to be 24 wagons and 360 metres long, taking up to five minutes to pass over a crossing. And there’s 48 public or private level crossings on the route.

However, this is a minor inconvenience over the 88 truck trips and 6,500 tonnes each weekend’s trains replace, with the wear and tear on roads and, for neighbouring residents, the not so unmissable rattle of empty trucks as they depart the Port.

Then there’s the 66% fewer emissions per tonne of freight carried by rail compared to trucks to factor in.

KiwiRail’s chief operating officer Todd Moyle expects the frequency and volume will build to 22,000 tonnes five days a week as the harvesting of mature logs increases over the coming years.

Moyle says KiwiRail will be working to raise public awareness when the line is in heavier use. He says, though, that people crossing a rail line anywhere should always expect trains at any time from either direction. They should take extreme care when driving over a railway level crossing.

Salient comments as this is Rail Safety Week.

Every day on average, somewhere in New Zealand there is a near-miss on a railway line.

“In the last 12 months, KiwiRail recorded more than 300 near misses across the rail network. Of these 191 near misses, 299 occurred at public level crossings and the majority of those crossings had flashing lights and bells or barrier arms,” TrackSAFE NZ Foundation manager Megan Drayton said at the launch of Rail Safety Week.

“This shows us that even with warning signs and protections in place, some motorists and pedestrians are still either being complacent, or taking unnecessary risks.”

Given that a freight train weighing 1,000 tonnes across 30 wagons can take a kilometre to come to a stop once the brakes are applied, we have to hope that Hawke’s Bay residents will be paying full attention while out driving at the weekends come spring.