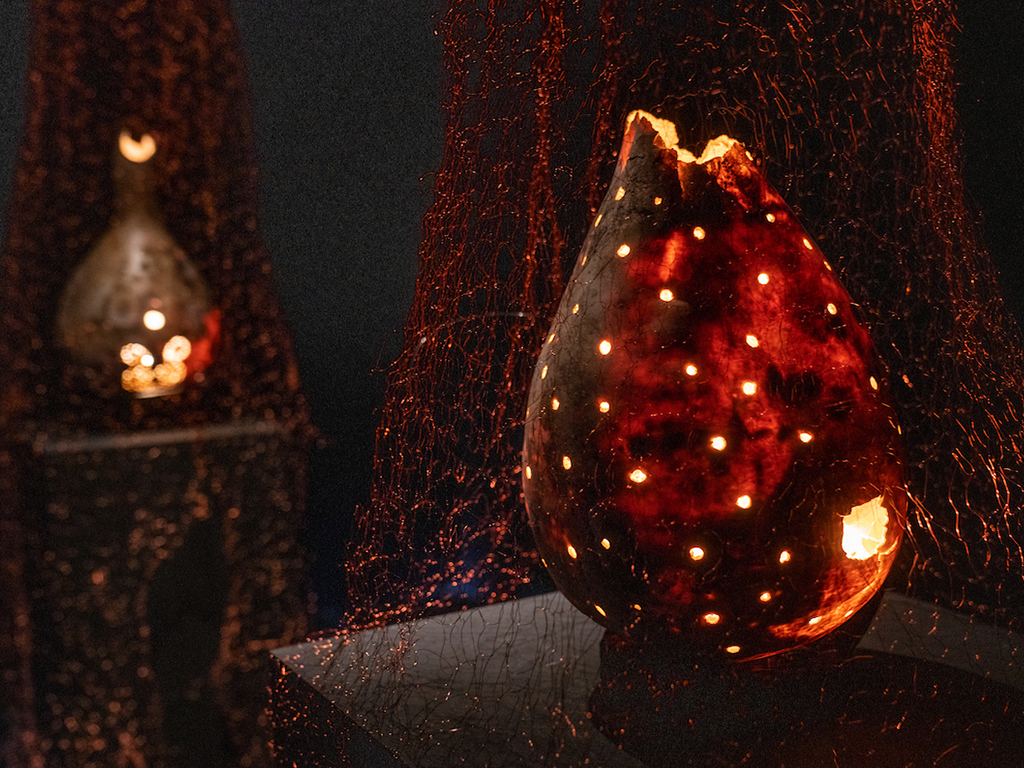 Held within the velvety darkness of the alcove in the Hastings City Art Gallery foyer are two large, dried gourds, both lit from within and standing on a plinth. The gourds are draped over with a loosely hanging mesh of fine copper wire.  Between the plinths on the floor is a small hollow gourd surrounded by a ring of seeds.

Of itself this collection of objects is very delicate and beautiful. As the eyes adjust to the darkness, the installation has a presence that is ethereal, as the pale light identifies the metallic strands of copper.  It feels like a shrine and you know these are symbols. 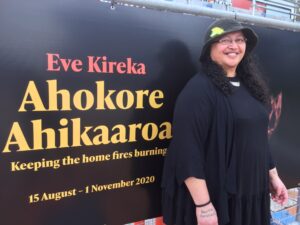 The creator of the art installation, Eve Kireka, has spent most of her life absorbed in and surrounded by the significance of the old ways of Maori through her mother and grandmother, now long passed. As a child and young woman their wisdom was received through women’s conversations and — unknowingly to Eve, the child — as a preparation for a life as a mother, grandmother and kuia.

“Making my art was easy because it was just coming out of me, it was as though I was being shown what to do. But to talk about it was hard because there’s so much that went on inside that is part of me. As I create this piece, I am just being me,” says Kireka.

Growing up, the whanau lived by the sea at Haumoana and their marae is Matahiwi. Her mother gave birth to 17 children, of whom 14 remain. To Eve, she was a very gentle woman who did not give expression to anger; she was strong, but she was a peacemaker.

Eve Kireka is a now grandmother herself and fully understands those conversations with her mother and grandmother – she is a kuia with a sacred duty to protect the young, future generations.

“They are our future ancestors and I interpret my role as Grandmother or Kuia to watch over them and to help them to understand their world.” The kuia role is often misunderstood to mean the old woman who welcomes visitors onto the marae, often called kaikaranga, but she is far more than that, she is a protector with wider, often unseen responsibilities. Eve now understands that the role was that of the kuia (post menopause) and not of the young girl or woman (who could still give birth). 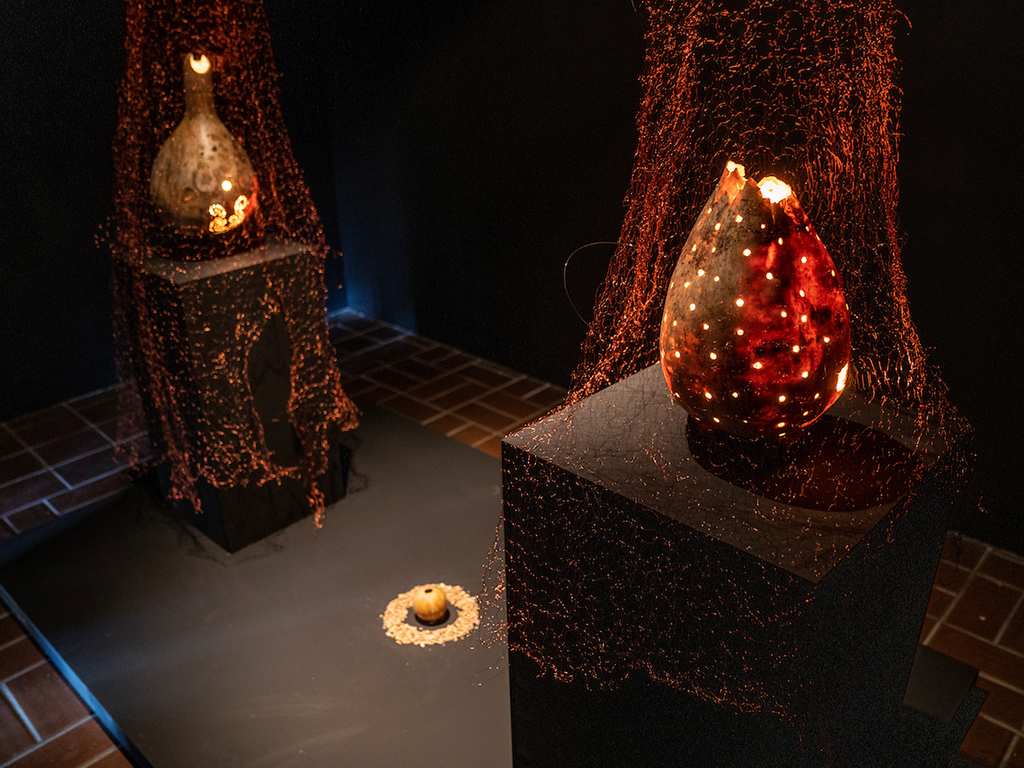 Kireka’s artwork honours these tipuna, and the symbols and forms in the alcove communicate this to the viewer — feminine, protective, a light in the darkness, seeds for the future, the gourd as a vessel.

‘Ahokore’ is a contemporary Maori word created to describe digital technology – aho, meaning wireless and kore meaning nothing. “I am very uneasy with using wifi and have been since training as a secondary school teacher in 2012. We were shown a video clip to draw awareness to the technologies we as teachers use in the classroom that may be detrimental to our students’ health.

“I took on a deeper role as a researcher since then and in my role as kuia, identify hazards from a cultural and health perspective,” she says. “I am very reluctant to use wifi technologies – the copper wire seen in the installation is the protective shield.”

Ahikaaroa – keeping the home fires burning. The title represents land title affiliations and the fires of warmth, of cooking and ritual, an essential element that secured your connection to your whenua and your whakapapa.

Ancient legends or pūrākau, refer to a female in Māori cosmogony called Hine-pū-te-hue who is personified by the gourds or hue. It is said that at the separation of Ranginui (Sky father) and Papa-tū-ā-nuku (Earth mother), Hine-pū-te-hue intervened when during the separation anger spilled over into fighting between the brothers. She is said to have taken all that anger into herself, giving out peace and is known as the mother of all gourds.

In contemporary times, Eve associates that intervention with the role her mother took during her lifetime, to emit peace just as Hine-pū-te hue did, and this being her inherent responsibility.

The tree rings at the base of each gourd acknowledge the balance between wahine and tāne, that research argues was broken with the coming of Christianity and assimilation of patriarchy by Māori males (Mikaere, 2017). The wooden bases act as a call toward the restoration of balance and the acknowledgement of the inherent role of the kuia who stands on the marae in her metaphorical role as the Whare Tangata, House of Humanity; the womb.

“I took the concept of ahikaaroa as being the knowledge that was passed down to me by my tipuna, in particular my mother and grandmother as a protector of life, of life givers, of mokopuna and those yet to be born – ‘keeping the home fires burning’ is about applying their knowledge and wisdom, keeping a connection to the whenua and knowledge of wellbeing of whakapapa and whenua.”

Having fluency of the language is a vital element in the role of the kuia.

“I was learning te reo through everyday events with my mum and kuia, both on and off the marae.  Today it seems a lot harder or different,” Eve says.  “Today, my concerns for the wellbeing of mauri seem to be overriding my ability to grasp hold of te reo, however, the intrinsic knowledge I hold spills forth in multitudes through my creative being and into my mahi toi (art works).”