The perfect storm created by an election campaign and a Covid community outbreak has allowed fear and hatred to flare up across all social and mainstream media platforms. At a time when we’re all scared and worried enough about the virus, when we need to come together as a Team of 5 million to fight it as we have done before, we are declaring war on each other!

Some of the worst hatred is being spouted by followers of Billy te Kahika, who believe that the Prime Minister is a communist terrorist, leading us into slavery and subjugation, and that we are being forced into lockdown, in order to enslave us, for a ‘scam’ that is no worse than the flu.

Here’s some Facebook posts from the followers of Billy te Kahika:

“None of this should be happening when the survival rate is 99.6%! The testing kits they are using were never intended to test viruses! The whole thing is a scam!”

Another: “Communism 101. Your PM comrade doesn’t want to save you, she wants to enslave you. Your rights are quietly being stripped away, day by day while sheep wander around muttering ‘be kind.’”

Another: “ALL the roadworks in NZ are to upgrade for military convoys that will be used to take people to extermination centers.”

And ultimately let’s not forget as this post says: “All this for the deaths of 22 mainly older co-morbid people…”.

In Auckland Saturday, 150 people protested today against the government’s Covid response, wanting to be free. That means lock up the old, the frail, the high risk citizens, like those with obesity, diabetes, heart conditions, cancer, any of those diseases prevalent in the elderly, Maori and Pasifika so the rest of society doesn’t have to wear masks or keep social distance. Then they can go out and be free!

Yes this is what we’re hearing from members of our new political party “Advance NZ”, born and bred on Facebook, a weird coupling of a QAnon conspiracies-based party, Billy Te Kahika’s NZ Public Party, with Jamie-Lee Ross, the ultimate outsider with nothing to lose. 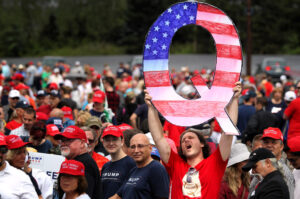 QAnon is an international conspiracy movement which believes governments, including ours, are in cahoots with an international cabal of Satan-worshipping pedophiles who operate a global child sex-trafficking ring. They, with the help of Donald Trump, must save the world’s children – from being molested, killed and being eaten to extract a life-extending chemical from their blood!

Fantastical as this may sound, people believe it. The sad thing is that our conspiracy party has divided families: Billy T followers believe they are involved in a historic movement which many others (“sheeples”) don’t know about, but will radically change the country. They feel connected to something other people don’t yet know about, and that they are part of an historical movement that will be written about for generations.

They will often cut themselves off from family members who try and argue with them. QAnon believers will comfort themselves by imagining that there will be a moment of vindication sometime in the near future which will prove their beliefs right. They imagine that after this happens, not only will their relationships be restored, but people will turn to them as leaders who understand what’s going on better than the rest of us.

Dealing with the serious problems that confront our nation and our planet becomes incredibly difficult when the public discussion is poisoned with groundless conspiracy theories.

I’m glad I live here, not anywhere else in the world. We have a strong and capable multi-faceted team of experts to guide and protect us. Level two is not so bad. If we had a big outbreak – like clusters from large groups who gather without masks and won’t social distance – our stretched health facilities would be inundated.

What we all need now is to have faith and confidence in each other, and show that love and camaraderie which took us through Lockdown 4 and out the other side. That’s where I want to be.