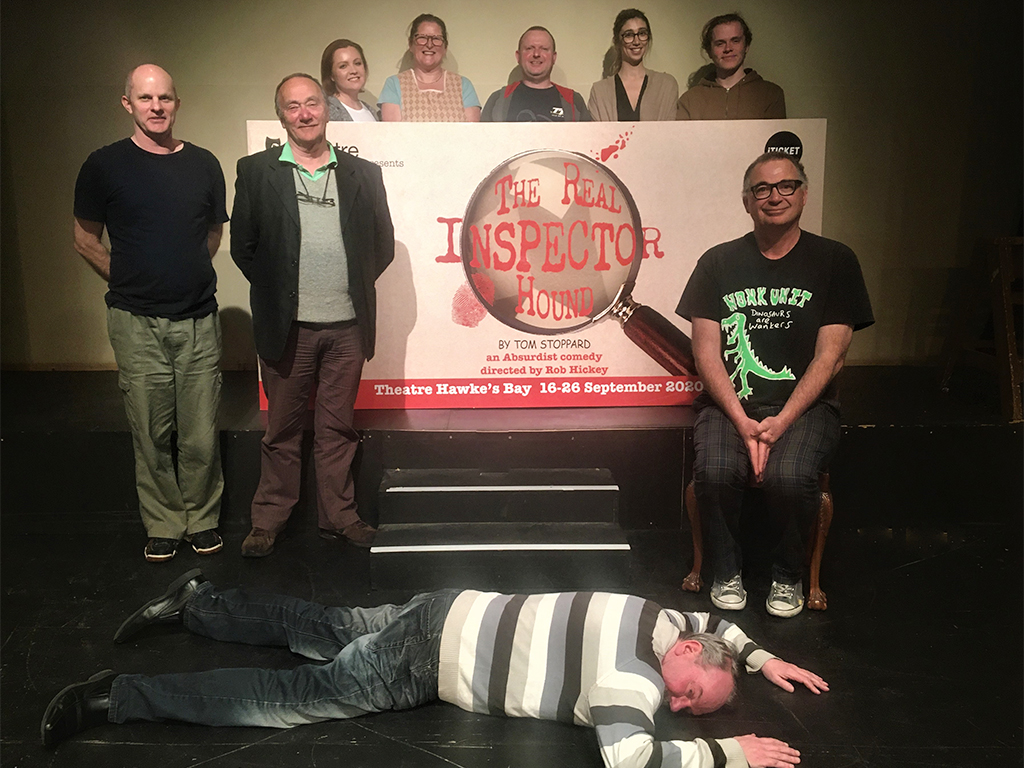 It’s been hard to find a lot to laugh about in recent times, so Theatre Hawke’s Bay aims to remedy that with their next production, ‘The Real Inspector Hound’.

It has been a tough time for live theatre too. Theatre Hawke’s Bay were rudely interrupted by Covid-19 after the commencement of their last play ‘Memory of Water’, with some performances before and the rest a few days after Lockdown presenting them with incredible difficulties in rehearsal and production.

For their spring production and still in a period of uncertainty, the company are pushing ahead with a very different kind of play, Tom Stoppard’s one act play ‘The Real Inspector Hound’ – a spoof/comedy full of absurd humour and exquisite dialogue.

Showing at the Playhouse in Hastings in mid-September, it’s the play that director Rob Hickey has been burning to produce for aeons. “It’s been on my bucket list, I love this play!” he says. He himself has performed in two different productions of ‘Hound’ over the years, playing a different character each time. “The two productions were completely different and I’m thrilled to be able to present yet another version.”

‘The Real Inspector Hound’ starts as a gentle parody of Agatha Christie-esque murder mysteries complete with eccentric characters, set in an isolated country house, with a mysterious stranger and overly forced exposition. This is however, merely the play-within-the play, as the audience gets drawn into the stories of two wildly contrasting theatre critics who find themselves enmeshed within the very fabric of the play itself.

“Playwright Tom Stoppard’s main contribution to comedy, and theatre in general, is his wonderful use of wordplay to delineate his characters,” explains Hickey. The two critics, Birdboot and Moon, whilst being intelligent, articulate and fantastic, are contrasting creatures with very different backgrounds and their own axes to grind. “The clash of characters and the totally absurd unreality that they create makes for a seriously funny piece of theatre,” he says.

It is one of Stoppard’s early works from 1968 – at a time when he had notable successes with his Shakespeare spoofs and before he went on to write plays that focused on more serious themes.

Rob Hickey has spent his life working as a theatre production director and actor, based in Wellington but travelling widely to work with theatre groups in musical theatre and other types of productions around New Zealand. Five years ago he returned to live in Hawke’s Bay.

‘The Real Inspector Hound’ is on stage at the Playhouse on the corner of Hastings and Alexandra Streets in Hastings from September 16th – 26th. Tickets are available through i-ticket (general admission with C-19 restrictions). Come, enjoy and support your local live theatre, they need our support.