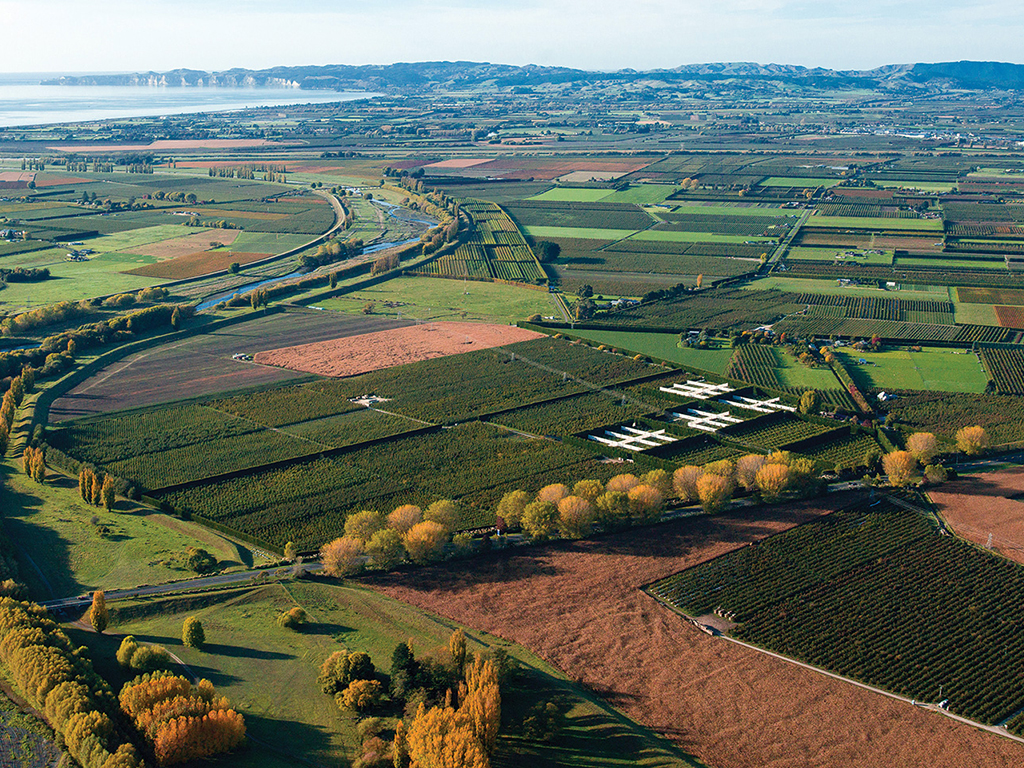 Everyone knows that Hawke’s Bay has an exceptional climate and an incredible aquifer.

The regional resource that is least understood and appreciated are the soils of the Heretaunga Plains. While we might enjoy the sun on our faces or a cool glass of water, we’re less likely to think kindly of the brown stuff beneath our feet. Indeed much of society stays off it and lives on the concrete and bitumen ‘enhancements’.

It’s at mealtime we should think of the soil because almost everything you eat is produced by it. The Hastings District Plan talks often about the ‘life supporting capacity’ of the soils and those three words say it perfectly.

Covid-19 lockdowns have seen a renewed discussion about national food security. Here in Hawke’s Bay, unlike Mumbai or Shanghai, mostly likely there will be enough food within walking distance to sustain us for generations. We must not squander our ‘life supporting capacity’.

The Heretaunga Plains were formed by our three great rivers, the Tutaekurī in the north, the Ngaruroro in the middle and the Tukituki in the south. Over thousands of years and thousands of floods layer after layer of rich alluvial soils were laid down.

The high quality soils are quite extensive because the rivers changed course over time. The best soils came from the untameable Ngaruroro. Prior to 1897 the path of the Ngaruroro swept south of Roy’s Hill. It followed the path of what is now the Karamū Stream, curling around the west and south of Hastings, then past Whakatu and Clive to the ocean.

During the 1897 cyclone part of the plains received 533mm of rain in 30 hours – 70% of our average annual rainfall. During this event the Ngaruroro forced its way through a historic path north of Roy’s Hill and there it has remained. In those days the Heretaunga Plains was so flood prone that farming in many areas was impossible. The flood protection schemes built in the 1920s and 30s secured the current path of the rivers and modern drainage technology made increasing areas available for food production.

If these soils are well managed there is no end to their productive capacity. While floods lay down the raw material for high quality soils, they take perhaps 80 years without floods to develop the soil structure and biological activity that unleashes their true potential.

In the early colonial years, settlements were sensibly located on poor soils in Napier and Havelock North. When the railway went through in 1874, some bloke decided a straight line across the plains would be most efficient. Francis Hicks donated land for a small railway station and set aside 100 acres of land for settlement. The area was described as a ‘duck-shooting swamp’ and by 1884 only had a population of 617. Planners still saw Havelock North as the future city, but the lure of the railway proved powerful.

Land in NZ is categorised under Land Use Capacity (LUC) and graded from 1 to 8 along traffic light colour codes; from dark green (LUC1) to dark orange (LUC8). This is a low resolution system that is a good general guide to the potential of land. We take our fertile plains for granted, but New Zealand has nowhere else quite like this. LUC1 soils are claimed to have ‘virtually unlimited potential use’ and make up only 0.7% of NZ.

I don’t think we can be too critical of decisions made 150 years ago, but it’s fair to hold current councils to a much higher standard. Councillors love development the ribbon cutting and the photo op’s that new projects provide. If they do stymie a project or two, all the developer has to do is wait a few years for a new set of councillors and have another crack. Over time, piece by piece, the plains are being eaten up.

The great myth of the Heretaunga Plains is that the soils are all the same – they are not. The HBRC Soil Map is a complex beast, but the two best classes soils are represented by bright yellow and bright green. These are the Twyford and Hastings soils, which sweep around Hastings, following the path of the Ngaruroro past and present. The best of these are to the north and east of the Hastings, which is warmer and less frost prone that land to the south.

Since WWII approximately 3,400 hectares of land has been given up to urban development. Of particular note is the madness of Tomoana and Whakatu industrial zones, both on exceptional soils. In the bad old days Whakatu made sense as you could just dump all the waste into the river and it would quickly thereafter disappear into the Pacific. In more enlightened times the HDC favours Irongate, which is on much poorer soils. Sadly the cluster effect is strong and Irongate has lesser appeal.

Now an inland port is mooted for Whakatu; it is sure to create more pressure to expand the industrial zone there.

In my time, the worst I’ve seen was the Lyndhurst subdivision, which is on the best soils in the world. If you really want a standout vege garden, buy in Lyndhurst. Many smaller area have been a frustration too, such as the ‘Food Hub’ down Ellwood Rd; again on superb soils. There was much fanfare about the innovative, value-added cluster of business that would seize the opportunity but all that seemed to pop up was ‘Miracle Water’ that sought to bottle up our water and ship it off to China. I’m similarly apoplectic whenever I drive past the Delegats winery on the Expressway – a cellar door and maybe a modest restaurant might be okay, but industrial-sized projects should be on poor soils in industrial areas.

The developers in any of these cases were smart and added another nought to their land value – good on them. What irks me is the short-sighted politicians and bureaucrats who should be the revered guardians of the plains, but have fallen well short. One of the latest ideas mooted is the Karamu Masterplan, which seeks to unlock the potential of the eastern side of Hastings. The Masterplan seems to be in Covid lockdown for now, but watch this space.

The key planning document that comes around every six years is the Heretaunga Plain Urban Development Strategy (HPUDS). The 2017 version has provided plenty of land for future development. Between the two city councils they’ve identified more than 1,000 hectares that may be required before 2045 … the vast majority of which is on the plains.

Getting the HPUDS document right is the key to our planning future, but we may have a tailwind in the form of a National Policy Statement on Highly Productive Soils. For central government to develop a National Policy Statement is a powerful signal to councils everywhere that we need decisions that are right for the next 1,000 years, not just the next election cycle.

‘If not on the plains, then where?’ I hear the developers cry. 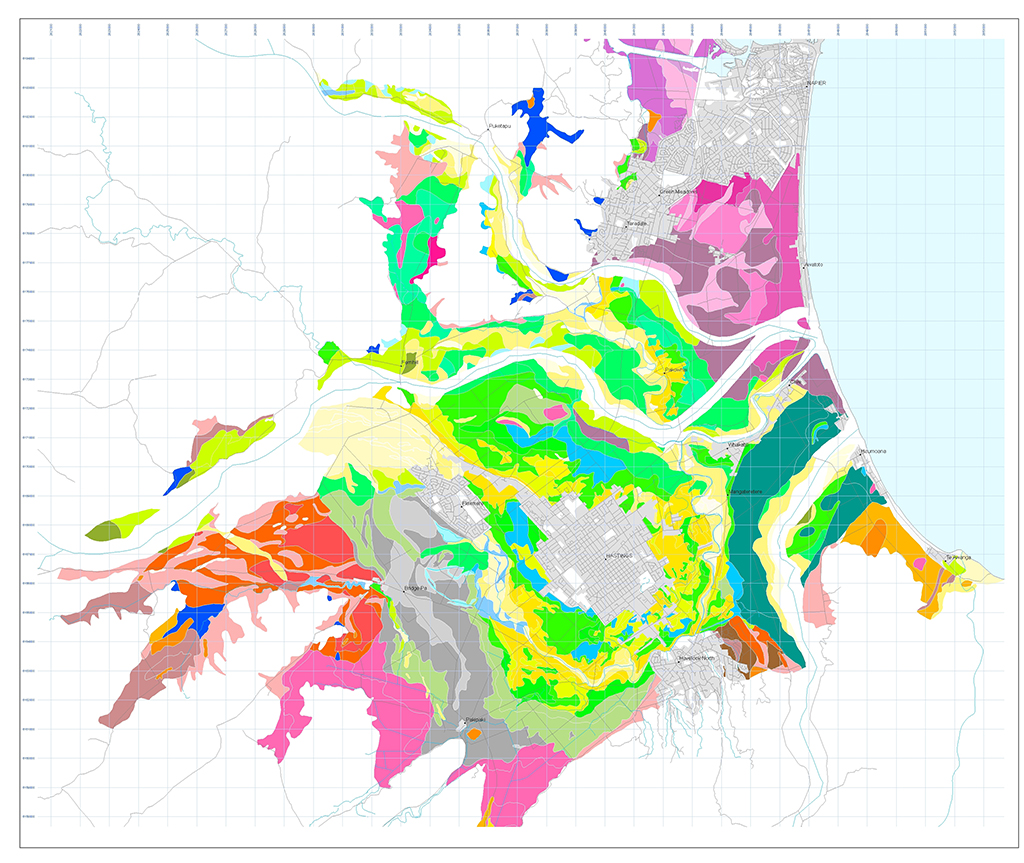 A good starting point is that Hastings should get no bigger. The older settlements of Napier and Havelock North have much poorer soils. Napier has many post-earthquake soils that are saline and on lagoon sediment. Their only good soils are towards their southern boundary, close to the Tutaekurī.

In Havelock North there is room for expansion southwest. At the base of these hills, along Middle Road the light pink on the map are Class 32 soils with a clay pan and terrible drainage. Next door there is a large pale green area which is Class 9 – clay loam on Taupō pumice. I grow trees on some of this and both the water holding capacity and drainage are poor. There is enough land in this area to build 25,000 new houses.

When you drive south from Hastings there is a point where the orchards stop and grazing/cropping starts. This area had little flooding and is dominated by the remnants of the Taupō eruption – ash on Taupō pumice. I feel sorry for the sheep. The development solutions are more expensive and less convenient than building north and east of the city, but spread that cost over 1,000 years and it’s the right call.

A small group of growers, of which I am one, has started a ‘Save Our Plains’ campaign in order to protect the priceless resource that is under our feet. Some may say ‘greedy growers just wanting it for themselves’. Not so. My family own several blocks of land close to the city. If they were rezoned and concreted over, I’d be greatly enriched.

But as growers we’re just passing through. One day I’ll be buried in this earth and I’d rest easier if I know the plains are there to nourish future generations. Please bury me in the worst soil you can find.

2 responses to “Save our plains”