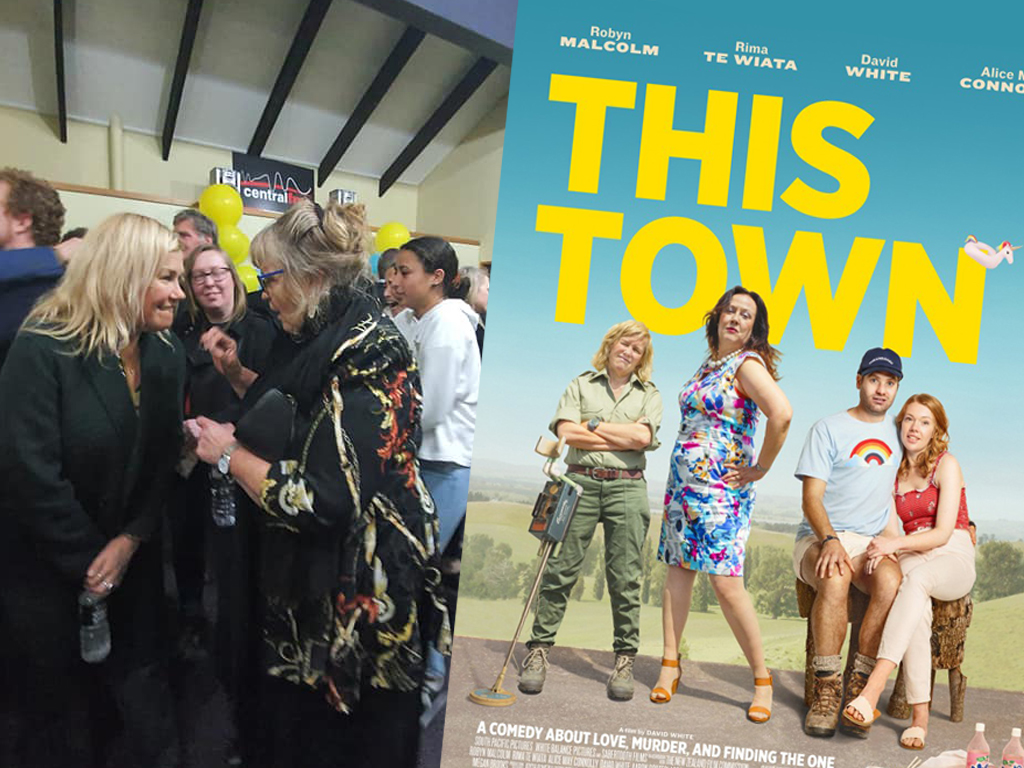 This Town is a movie written, directed and starred in by Takapau born and bred, David White. It was filmed in Central Hawke’s Bay and Tararua.

The premiere was packed with the myriad of locals who had played their part in the creation of this hilarious, touching production. With our best bib and tucker we all lined the red carpet, past the pop-up pet zoo, past the Seven Sharp cameras and into the Civic Theatre’s foyer. Champers and nibbles in hand, greetings made, hugs executed, selfies snapped, it was time to take our seats.

Te Aute College rangitahi honoured us with their mihi, their waiata and their haka. David spoke his thanks and the lights went down.

No sooner had the first movie credentials appeared on the screen we were whooping. There was David’s name … whoop … there was David’s logo … whoop … cheers and whoops every time anything recognisable appeared on screen. Anything at all, a shop, a street, a person crossing the road. No whoop was left unwhooped.

The packed auditorium stayed till the very last of the credits rolled by, watching for their respective names. There were a lot of credits! David received his much-deserved thunderous applause with typical humility.

Back into the foyer our whānau gathered for a photo with David and then suddenly, there beside me for the snap, was star of the show, Robyn Malcom. Robyn Malcom! I rounded on her with such delight. Robyn Malcom! And I had a story to tell whether she wanted to hear it or not!

Twenty-two years earlier our Kate was 12 years old and she and her cousin Kiriana were Shortland Street fans. In that particular year Circa Theatre in Wellington were presenting a Shakespearian play starring … Shortland Street’s Robyn Malcom. I seized upon the opportunity to introduce my two girls to the Bard with Robyn as the bribe. Better still, what if I could engineer a meeting and a photo opportunity? What a mother I would be!

As it happened, at that time, I had a radio show on Central FM. I contacted Robyn’s agent, put on my most important, professional voice and organised an interview post-performance. What a mother I was!

The day finally came and off we went. The play was of course brilliant, but the icing on the cake was about to happen. Out from backstage came not only Robyn Malcom but a Tim Balme bonus. Girls introduced and photo taken, it was my turn.

Oh how I had pictured and practiced in my mind. Eloquent, probing questions. I would maintain a cultured somewhat refined, perhaps even aloof countenance. They would be impressed. More than impressed. They would marvel at my clarity, my understated wit. She’ll go far they would reminisce later in their dressing rooms. I had my impressive BBC lookalike microphone at the ready.

A glaze drew quietly down their professional faces. The glaze was duly noted but I seemed powerless to stop the never-ending loop of gush. I think my hands were flapping, I couldn’t sit still in my seat. I was so far down this terrible road that I was about to ask them what their favourite colour was, their amazing, wonderful most favourite colour when they began to ask their own questions and then answer them. I beamed all the way through with the odd intake of breath and an oh, oh, oh. Finally the whole debacle finished and the two famous ones glided graciously back from whence they had come and we returned to our motel.

Back in CHB I handed the tape to the station manager and suggested that they might have to cut me out. ‘Oh, no,’ she protested, then she listened to the tape. ‘Oh yes,’ she agreed.

In the retelling of the tale, in my rush to get it all out of my mouth in one go, in my over familiar grip on her arm, I fear her opinion of the old one from CHB may not have shifted too far from the original!