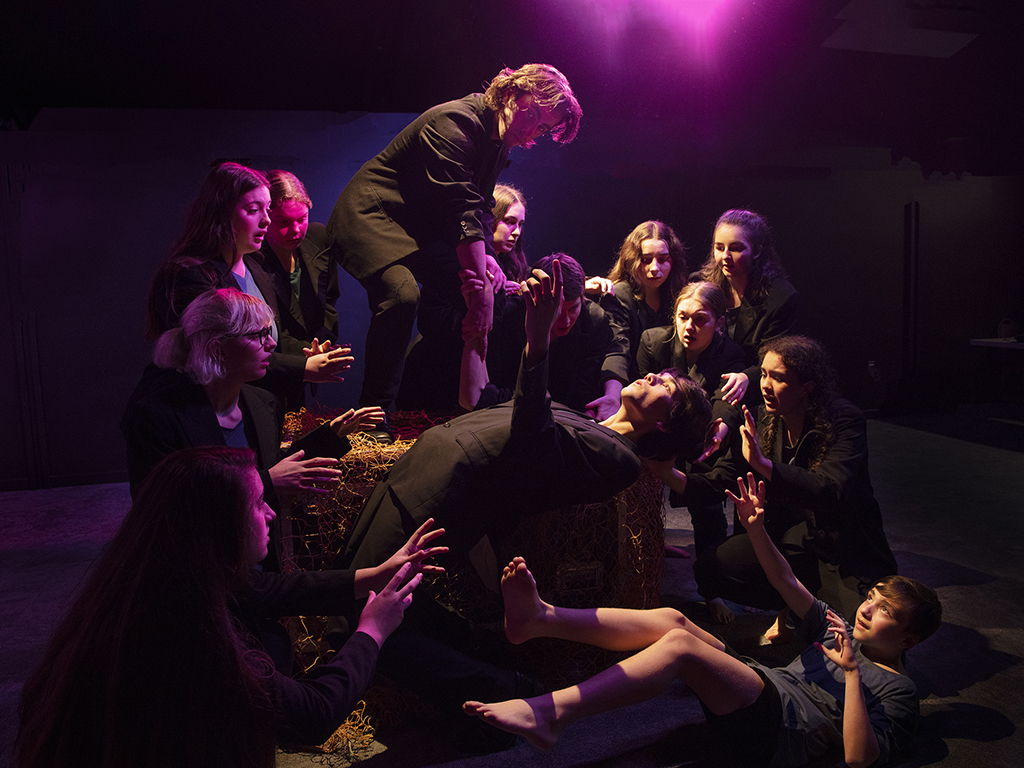 Everyman. Here in front of us was such an exuberant energy, intensity, physicality, truth and sincerity – some of the descriptors that flood to mind as I sit down to write this review of Everyman, that was performed by a cast of 15-20 year olds at the Blackbox theatre at Keirunga.

Everyman is the 2020 production by HaBYT (HB Youth Theatre) over five performances as part of the Harcourt’s Hawke’s Bay Arts Festival first week.

Everyman is based on the 15th century morality play in which God holds Everyman (mankind) to account for his sins. In this reimagined version written by British Poet Laureate, Carol Ann Duffy, the original concept has morphed into a scathing rendition of the consequences of the materialistic ways of modern man — holding us to account for the terrifying prospect of the degradation of life as we know it, while the indicators of climate change are ignored and conspicuous consumption continues to thrive.

Duffy’s version has Everyman as a successful businessman dressed in a snazzy suit and celebrating his 40th birthday party in an indulgence in cocaine and alcohol with his friends. Things go haywire as the evening spins into a frenzy of dance and writhing bodies resulting in Everyman facing death in a sudden and unexpected way. God/Good Deeds appears as a cleaning woman with bucket and mop and a quiet way of delivering uncomfortable truth; Knowledge is a down-and-out who helps Everyman to face up to his life of myopic indulgence to reach a penitential acceptance of death.

Andrea Brigden, plays Death with an enchanting Irish accent. She is an adult Australian actor who stepped into the role late in the production’s development; she brought a terrifying power and cynicism to her performance. Leading actor Tom Steinmann as Everyman was very believable as the (at first) swaggering birthday boy who tries so hard to persuade his erstwhile friends to join him on his pilgrimage into death (they refuse and leave him to it), then the fear and cowering as the inevitable becomes clear.

The directors, Peter Cottrell and Champa J Maciel (choreographer), have directed and facilitated the young cast into a deep understanding of the play’s meaning and emotions, producing a sincere and truthful delivery that when combined with the complex and masterful choreography, makes a graphic statement about the state of mankind and the dilemmas of our species.

It was a truly memorable occasion that made my heart swell with admiration for the young actors who performed in Everyman and those who directed and produced it. My very sincere congratulations!