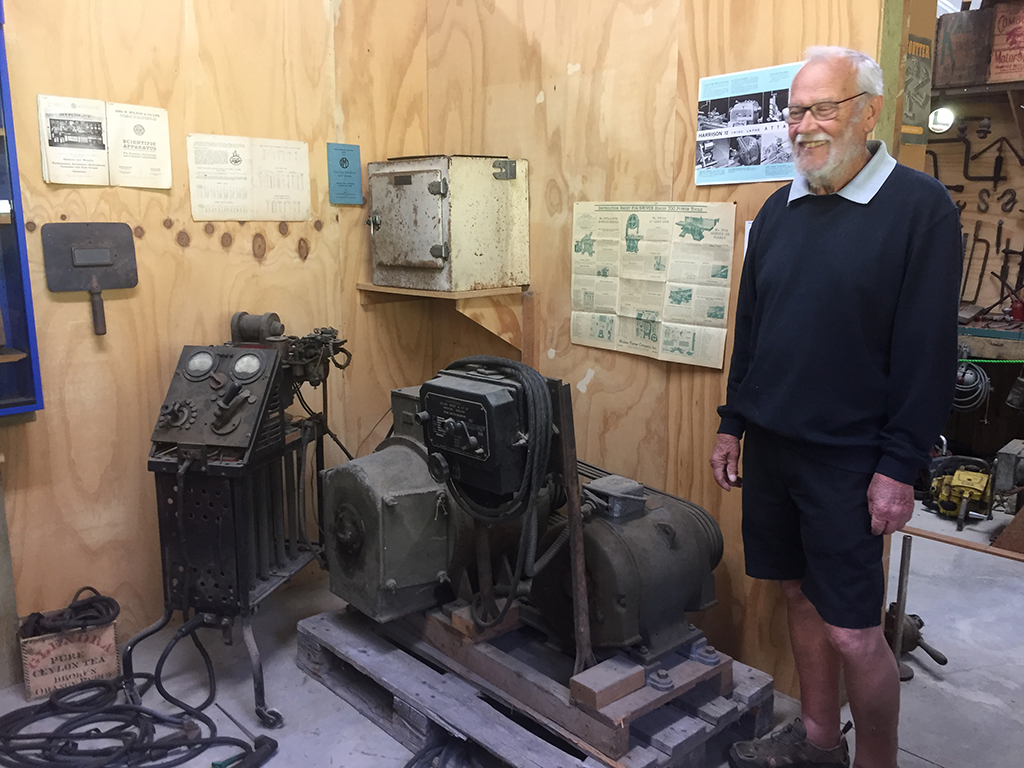 On a perfect Labour Day morning, BayBuzz visited an address in Kahuranaki Road to check out a ‘family museum’, and feeling very curious as to what I’d find, I turned into the dirt driveway leading to a red barn standing 500 meters up a gentle slope.

I had found ‘Martie’s Red Shed’, a barnlike structure that houses the Greenwood family memorabilia and the farm chattels of six generations.

Martin A’Court and Carrie Greenwood have lived, farmed and raised two sons at Kahuranaki Station for thirty years. Before them, Greenwoods have owned and farmed this land with Kahuranaki as its central limestone massif for 96 years (since 1924). Kahuranaki is considerably higher in altitude than its neighbours, Mt Erin and TeMata Peak, and is described as a hill country farm with conditions like no other farm in Hawke’s Bay.

Before that, Carrie’s grandparents Roger and Dorothy Greenwood and then Danforth their son (and Carrie’s father) and family lived at Duart House in Havelock North from 1926-72, travelling to and from the farm for work.

Martin built the Red Shed ten years ago and has since extended it as the collection grew; as older Greenwood relatives died their stuff had to go somewhere.

“The Greenwoods never threw anything out,” says Carrie, “so as the family grew through the generations and members were dispersed their deaths meant that decisions had to be made about their possessions. Throwing them out was not a not option, so they all came back here to the farm – ‘they’ve got the room’ they said. So here it came.”

The house and all the farm buildings were chocka with possessions, from precious personal items to heavy farm machinery, but Martin loves a project and he and his wife are fascinated with history. The Red Shed became their focus and while it is a hobby and not a business, it is a very ambitious one and has become a deeply absorbing project.

The couple are now in their seventies and for the past ten or so years have planned and constructed the building, creating a replica of a ‘domestic’ interior and at the rear of the 650m2 building is a workshop display space for equipment that was relevant to the tasks required of a pioneering farmer through to recent times – frequently Greenwood-made Heath Robinson-style contraptions cobbled together from bits of other machinery and No.8 wire. 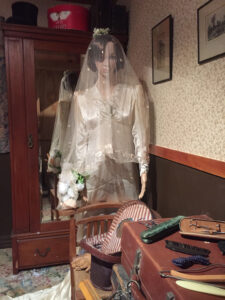 A comprehensive collection of domestic memorabilia contains such examples as Martin’s mother’s wedding dress and veil worn by a manikin, iron bedsteads and a child cot dressed with original lace bedspreads, children’s toys of earlier eras, wooden furniture, some carved and built by the daughter of the household. The kitchen shelving containing familiar ingredients of an earlier era and dining room set up with tablecloth and dainty English porcelain and lots of photographs – all provide prompts for Martie and Carrie to tell the family stories that have been passed down through the family as I am guided through the softly lit rooms.

The first immigrant arrivals were Dr John Danforth Greenwood, his wife Sarah and six of their (future) thirteen children, arriving in Wellington in 1843 having invested in the New Zealand Company. With his service as Ship’s Doctor, the investment included a package of land – 1 acre in Wellington, 1 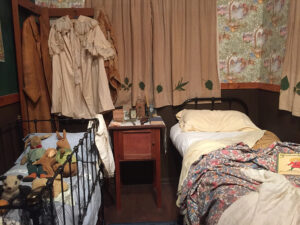 acre in Nelson and 50 acres in Motueka. As ship’s doctor Danforth delivered his wife’s seventh child, Alfred, during the voyage. Sarah was a constant and vivid letter writer and it is due to these communications that such detailed information about that first generation of the pioneering Greenwood family exists.

The New Zealand Company was the brainchild of Edward Gibbon Wakefield and his methods of recruiting settlers and making money from sometimes unscrupulous dealings are evidenced in the experiences and stories of this family. It took a couple of generations before Kahuranaki Station came into family ownership, but the stories of each generation are well-documented and their possessions are now well-housed and cherished.

It seems this family have always had a sense of being a part of the history of this country and perhaps it is this that has provided the motivation to hold onto the collection of chattels that are now housed in this fascinating historic family museum.

One response to “The Greenwood Family Museum”