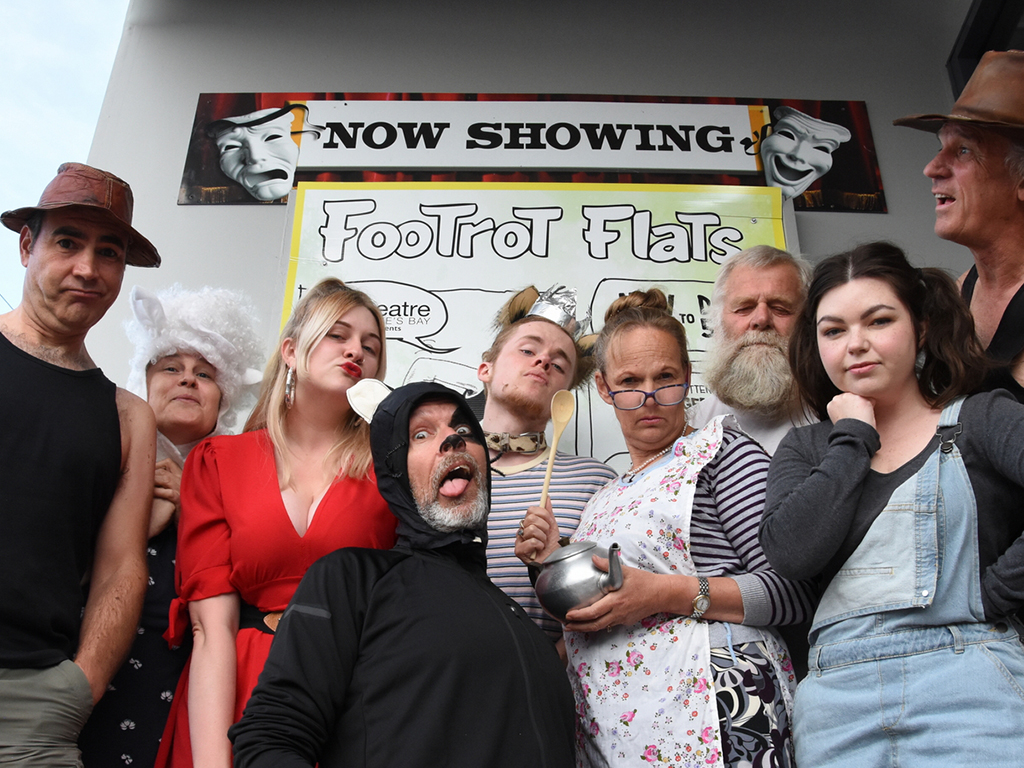 Showing at The Playhouse in Hastings, Footrot Flats promises a night of homegrown entertainment, great food and laughs with Roger Hall’s script based on the cartoon classic.

Opening on Thursday November 19, starting 7:30pm, Murray Ball’s iconic 80s cartoon characters will come to life. Grab a bunch of tickets for your favourite people and reacquaint yourselves with Wal, Cooch, Cheeky,  Aunt Dolly, Prince Charles, and mischievous Pongo and have a great end of year event.

Director Jacquie Hills said an outstanding cast and support team have been gathered to create this stunning trip to our Kiwi past. “Who knew Murray Ball’s iconic Footrot Flats would ultimately be made into a stage show and then a movie? This is Kiwiana at its best and just in time for Christmas,” she says.

Footrot Flats was written for the stage by New Zealand’s most successful playwright, Roger Hall and it was originally showcased in 1983, predating the movie. The music was written by Philip Norman with lyrics by A K Grant.

Adding to the humour, be entertained with bleating sheep and a reluctant ram, the cat named Horse, Major the pig dog, an amorous sow and of course Dog and his paramour, Jess.

Hills is a committed fan of Playwright Roger Hall, directing and performing in a range of his shows. This included the role of  Cheeky Hobson with Group Theatre several decades ago. “So directing Footrot Flats has been on my bucket list for several years and finally the time has come.”

There are many not to be missed highlights within the performances — the songs and the creativity displayed in the costume and props. And although written in the 1980s and based on a cartoon, in true Roger Hall style there is also depth within this comedy. There are some important decisions — to live in town or the country, the frustrations of farming, relationships, how to find work that is satisfying and the care of the environment.

“With the events of 2020 it is time to celebrate the survival of this community theatre, have a jolly good laugh and get ready for the festive season,” says Hills.

Fans, old and new have until December 5 to see the show, including  a Matinee on November 28. On at the Playhouse Theatre, cnr of Alexandra and Hastings Streets, Hastings November 19th – December 5th.

Tickets are available through iTICKET or email usherwood33@gmail.com to arrange large bookings.