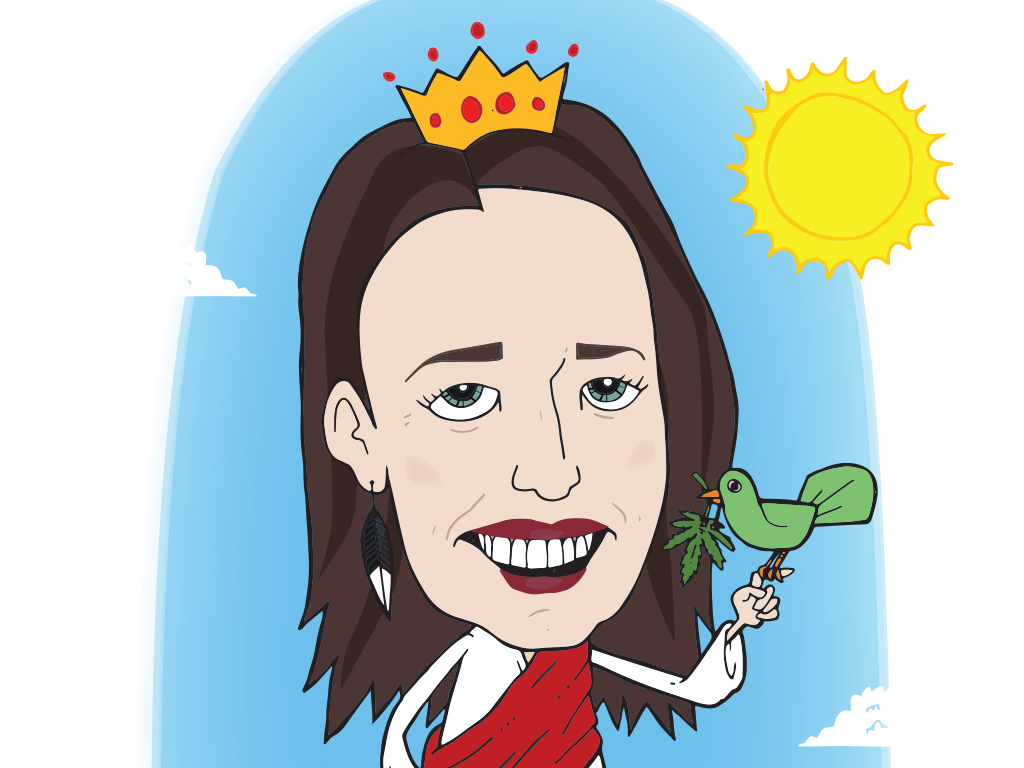 So, now the Labour Party and Jacinda Ardern have a mandate. But a mandate for what?

Or cautious clinging to the centre, putting some lip gloss on safe, incremental ideas that ultimately won’t achieve the transformations required in these critical areas. A determined effort to serve up a politically inoffensive omelet when the severity of the challenges require eggs to be broken.

Selling big ideas is a forte of our Prime Minister, who above all is a master communicator. If anyone can lead and rally the public behind challenge, she can … if she has the will.

But let’s just examine one of these areas, which gives reason for apprehension – global warming.

A chorus of political pundits – from journalist Rod Oram to former PM Jim Bolger to former Green Party leader Russel Norman to the Newsroom team of Jonathan Milne and Marc Daalder – have voiced concern over Labour’s timidity on climate change.

Over the past three years, the Ardern Government has been frozen in place after proclaiming addressing climate change as “our generation’s nuclear-free moment”. Meantime, our greenhouse gas emissions have steadily increased, with net emissions almost doubling since 1990.

Says Bolger: “We’ll eventually, soon, get a vaccine for the virus. But there’s no vaccine for climate change. That requires hard, difficult and often unpopular policy decisions. We have to see whether the new government will want to face up to that.”

It has been easy – and not without reason – to blame the Government’s cautiousness on climate on NZ First’s opposition. But that excuse is gone.

And at the same time, the most passionate and articulate champion of action, Green Party co-leader James Shaw, might also be gone from his post as Climate Change Minister by the time you read this. If he is not, there’s some hope.

On climate, the Government will need to first formulate its domestic policy – which includes key decisions about energy, transportation and farming – and then as a global citizen reassess the binding commitment it must make to the international community through the so-called COP26 process.

The Climate Change Commission established by the Zero Carbon Act will soon propose three five-year emissions budgets, covering the periods 2022-25, 2026-30 and 2031-35. These budgets, considered to be ‘apolitical’, can be ignored or revised by the Government, which must announce its plans by year’s end.

Key to these budgets is allocating limits across the various sectors of the economy. And that’s where the rubber meets the road.

With regard to energy and transportation, perhaps the bellwether issue is dealing with cars.

Road transportation accounts for 40% of all CO2 emissions from burning fossil fuels in NZ, up 93% since 1990. Yet earlier this year, the Government infamously abandoned its plan to enact NZ’s first-ever fuel efficiency standards for automobiles in the face of opposition from partner NZ First. This after acknowledging that “the vehicles supplied to New Zealand are among the most fuel inefficient and polluting of any OECD country”.

‘Clean green’ New Zealand is the only OECD country to not have such standards and even those proposed were at the lenient end of the spectrum.

Meantime, Boris Johnson has announced a five-year speed-up of the UK’s elimination of new petrol and diesel cars, including hybrids – none are to be sold in the UK after 2030. Other countries that have announced plans to ban petrol and diesel cars in the future (by either 2030 or 2040) include Denmark, France, Ireland, Netherlands, Israel, Sweden, and Iceland, with Norway (where the EV market share is already expected to be 55% this year) setting the pace at 2025.

The other bellwether for signalling the Government’s ambition (or not) for mitigating greenhouse gas emissions will be its treatment of farming. NZ’s ag sector (i.e, its ruminant animals) produces the preponderance of our emissions.

Tethered to NZ First, the Government has been constrained in its approach to on-farm emissions. Targets have been set, with industry given three years to sort out how those might be met. The Neanderthal wing of NZ farming, led by Federated Farmers and beloved to the National Party, has whinged and yelped about its need to play a part in the nation’s climate response.

Fortunately, other industry voices have been more forthcoming regarding the willingness and capability of the ag sector to meet the challenge.

Fonterra, sensitive to overseas markets, has been providing more than 10,000 of its suppliers with individual farm reports measuring their on-farm emissions, with an expectation they will now plan to mitigate them.

Beef+Lamb New Zealand has been looking carefully at on-farm carbon sequestration and recently released research indicating that woody vegetation on NZ sheep and beef farms is offsetting between 63% to 118% of their on-farm agricultural emissions, with the average farm offsetting about 90%.

If that’s the case, one can ask … what’s all the fuss about?

Progressive NZ farmers are already moving ahead, with a surge of interest in ‘regenerative farming’ practices that increase the carbon retention capacity of soils. The Green Party proposes a $297 million fund to help farmers transition to regen practices. By comparison, Labour weakly – almost apologetically – announced $50 million to help farmers prepare their farm environmental plans, with vague rhetoric indicating these might expand to include emissions mitigation.

So, cars and cows will determine how serious the Labour Government will be regarding climate change.

Reflecting NZ’s current international obligation under the Paris Accord, The Zero Carbon Act commits New Zealand to reducing greenhouse gas emissions (besides agricultural methane) to net zero by 2050 and to severely reducing agricultural methane emissions as well. Those reductions must be carried out in a manner consistent with limiting global warming to 1.5°C above pre-industrial levels.

Our current commitment limits NZ to 601 million tonnes of emissions over the decade to 2030. However, the Ministry for the Environment now says that a limit of no more than 516 million tonnes would be required to meet the 1.5°C requirement. And we are presently at 707 million tonnes of CO2e.

No one – policymakers or scientists treats the 1.5°C target as achievable at this point. To meet the Paris target and limit warming to 1.5°C, the world needs to achieve cuts of 7.6% year-on-year for the next decade, and effectively reach zero emissions by 2050. Commitments made by all nations would need to be three times more ambitious to limit warming to even 2 degrees.

The Government will need to present its new targets at the next climate summit meeting – COP-26 – now scheduled for November 2021 in Glasgow. Will New Zealand be a leader on climate? Verdict out.

According to the government’s official calculations of greenhouse gas emissions over the 2007-2018 window, Hawke’s Bay, which at 3.1 kilotonnes of CO2e accounts for only 4% of NZ’s total GHG emissions, reduced our emissions by 7.1%.

In Hawke’s Bay, agriculture accounted for 65.5% of our GHG emissions, while methane accounted for 61.9% of our total emissions. So, our challenge is ruminant animals, but at least these farm emissions have decreased slightly.

And before we blame it all on the cows, note that household emissions in Hawke’s Bay rose 9.4% over this period. That’s us humans!

Locally, the Regional Council is the torchbearer for action on climate change. The territorial authorities have too many other problems to deal with, like decrepit water infrastructure, to worry much about global warming, so they’ve happily left that issue to HBRC.

The previous Regional Council boldly resolved to ban oil and gas production in Hawke’s Bay, at a time when this seemed a real threat and before Government. And later declared a ‘climate emergency’.

But since then, apart from the major project to address coastal erosion and inundation as a result of global warming (i.e., sea rise and more severe weather events), HBRC attention has shifted elsewhere – there was Port future-proofing to finance and myriad water quality issues to address.

And then there’s ‘water security’ – originally, ‘water allocation’, or which user group gets first dibs on limited water while the freshwater ecosystems suck eggs? Now re-packaged as a noble and urgent response to climate change. The real issue in dry times is soil resilience, which requires improving water retention and healthy root systems, in turn a matter of wiser farming practices, not dams. But I digress.

The point here is that the Regional Council is presently rudderless when it comes to climate change. Staff papers emerge periodically reporting on Council’s in-house travel savings and energy efficiencies, and plans to protect the Heretaunga Plains from severe weather flooding. All well and good, but hardly sounding like a war-status response to a ‘climate emergency’.

A proposal by Councillor Barker to install a ‘climate unit’ at HBRC to spearhead a more energetic approach floundered, in part because of Covid-induced budgetary constraint, in part because regional councillors didn’t want to unilaterally fund a unit that would benefit other non-paying councils, and in part because no one really had the energy.

At present, the compromise is for HBRC to conduct a public education campaign (launched 26 October) aimed at establishing that the climate issue is ‘for real’ and informing and engaging the public around actions they can take to help address the challenge.

To test the public appetite for the Regional Council making a greater investment in the issue, a substantial public survey has been undertaken. And this will be followed by more formal eliciting of ratepayer views during the long-term planning process early next year. Creation of a ‘climate ambassador’ position will be mooted.

The survey results would seem to support more vigorous leadership by HBRC on the climate issue. BayBuzz was able to examine a more detailed breakdown of views by two ends of the age spectrum – those under age 40 versus those age 65+ – and indeed some interesting differences emerge. Here are some of the highlights.

Across generations, about six in ten respondents are concerned about the impact of climate change in our region. Fewer than two in ten are “not concerned”.

However, for the younger cohort, climate change is deemed more important and more attributed to human activities (versus natural processes), with greater concern about its impact on their future quality of life. 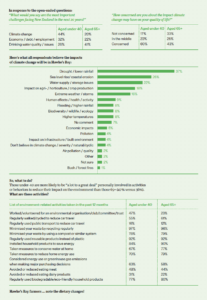 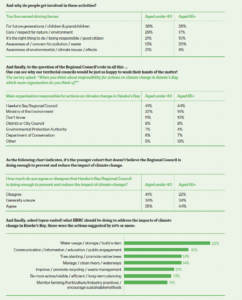 Plenty there to keep the Regional Council busy. But until next year’s public consultation on the HBRC’s next long-term plan, the verdict awaits as to how much ratepayers are willing to pay to see these activities given priority and undertaken.

Given that schedule, we should expect to see the new Government move first on the climate issue, given the legislated timetables outlined earlier.

As one pundit noted, Labour went ‘hard and early’ on Covid and was politically rewarded … it missed the ‘early’ boat on climate, but it can still go hard.

One response to “Climate Change … Day of reckoning is here”