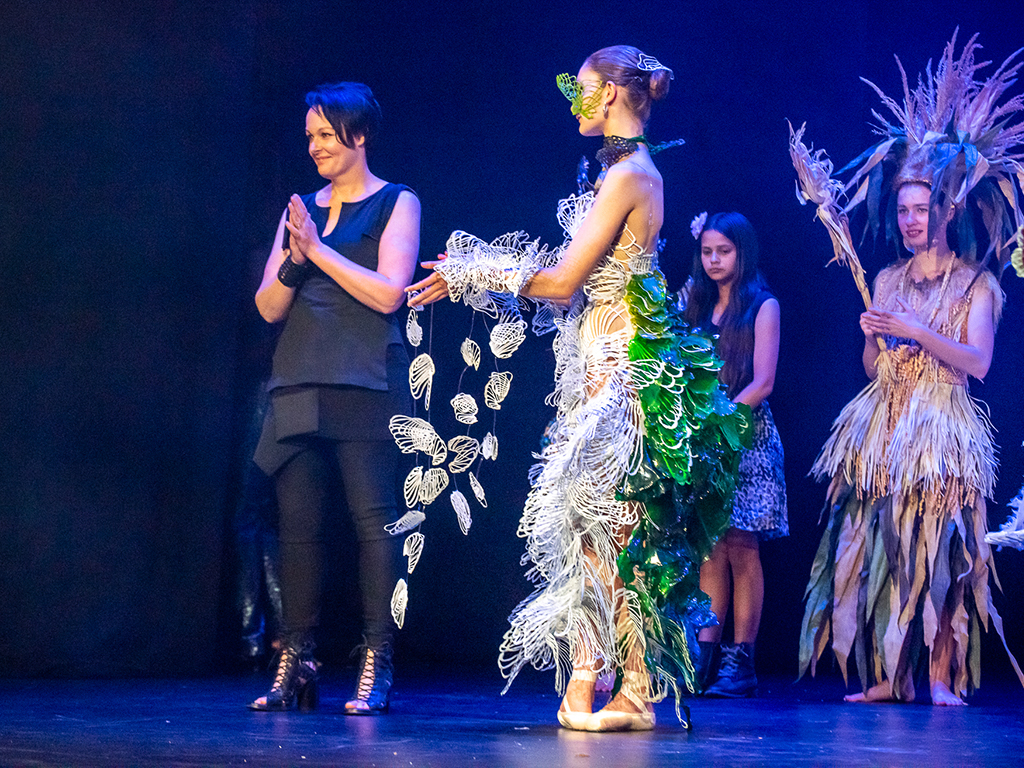 The Edible Fashion Award winners were announced last week and presented for the first time on the enlarged stage at Opera House, Toitoi Hawke’s Bay Arts and Events Centre. Amid huge excitement, the contestants aged 5 to 70+ saw their remarkable work showcased in spectacular style whilst their families and a delighted audience clapped and cheered them on.

The 2020 theme – Art in Motion – celebrates and reflects what the Edible Fashion Award is about – the magic of wearable art, in motion, on stage. The Award programme is well established and unique in New Zealand; it celebrates Hawke’s Bay’s innovative creative spirit and our rich history as a quality food producing region.

Each year the designers create astounding and beautiful works of wearable art from food, food by-products, imitation food or food packaging, with most contestants using recycled waste materials in their designs.

Following two days of preliminary judging in which all entrants have the opportunity to showcase their creations on the runway, a panel of accomplished New Zealand judges select the 50+ finalists that are part of the public show.

Judges for 2020 Awards were Kate MacKenzie, artist; David Trubridge, designer; and Richard Wood, photographer, with Bruce Jackson as judge for the Unio Jewellery & Accessory award and Michal McKay as judge for the Top Model award.

The Edible Fashion Awards is an incubator for creativity and talent. Across all categories, many participants enter year-after-year, often being involved from primary or intermediate school and into secondary school, going on to the adult category.

Entry is free to all contestants and in this way the EFA brings opportunities to develop creative imaginations. It involves participation, hard work and experience to build the talent, skills and confidence in the ability to innovate with materials and design.  “Just being involved with other contestants from other schools and being exposed to the amazing winning costumes, to see the possibilities, this raises their expectations and leads to innovation,” says Event Director, Kelie Jenson.

This year the Covid-19 pandemic meant postponing the event from its normal August date until mid-November. So, while the Awards features top designers from all age groups, for senior secondary schools students the event being in November meant it has clashed with NCEA examinations, causing them extra pressure.  So, while registrations were down somewhat from last year due to Covid it is an event that is becoming noticed nationally with entries and enquiries coming from outside Hawke’s Bay for the first time.

For many younger entrants, this creative experience can lead to major opportunities well beyond their early school age involvements. For example, 2016 Supreme Award winner Tessa Paaymans, has gone on to study costume construction and design at Toi Whakaare and was chosen for the New York Fashion Week, making a name for herself internationally. And now she’s giving back by acting as mentor for EFA in supporting our students and community contestants.

Similarly, Keryn Whitney who won Edible in 2017, has been EFA Schools Liaison for 2018-2020, a role that was created for her in 2018 with the intention to get a designer into the schools to inspire students and teachers to participate in the Edible Fashion Awards. She walks them through what is involved, says Director Jensen. “Keryn is a veteran of the WOW stage and a nine-time finalist and she is an awesome local resource.”

Assisting in a similar way is Dazz Woodward who has been entering as a contestant every year, with 2020 being her fifth event; she does volunteer work with youngsters at the kura in PakiPaki and Peterhead School assisting young Maori students in bringing their work to the stage. It’s an involvement with the children that she loves dearly. 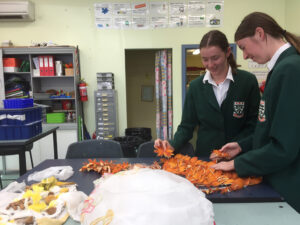 The future of EFA depends on engagement by would-be participants, and Hawke’s Bay schools have always been a generator of new design talent. BayBuzz visited two schools in the days leading up to the Toitoi show to check on progress. 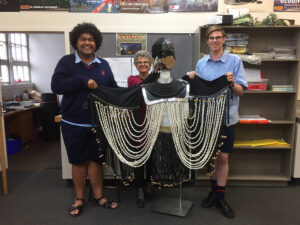 Over at Hastings Boys’ High School the two-man team of Elijah Ioane and Dylan van Heerden created a ‘Huia’ costume from penne pasta, amongst other things. Their entry was inspired by their school’s insignia that features the extinct bird.

Mercia Paaymans, the HBHS media studies teacher says, “We started out after Lockdown with six boys in the group of Year 12-13 students intending to enter, but that dwindled to just Elijah and Dylan as exams loomed and reality checked in.” She agreed the delay had caused problems for the boys, but Dylan found it was a balance to his academic studies. “This is working hands-on and with creativity, a great contrast to studying science, for example, which is all in the head,” he said. As they worked on the final detailing of their costume, Elijah and Dylan say they have found their involvement incredibly creative and it has been fun as they bounced ideas off each other, problem solving and being inventive with materials and design. Their entry was selected as a major finalist in many of the categories.

This event is becoming noticed inside and outside Hawke’s Bay for the enchanting designs and innovative materials being put to work in costume design. It has the function of incubator for developing creative talent and it deserves to be noticed.

If compared with the World of Wearable Arts Awards, Director Kelie Jensen believes the Edible Fashion Awards is poised to bloom into a national event. But unlike WoW, where the primary venue moved from Nelson to Wellington, this will stay in Hawke’s Bay.

AND THE WINNERS ARE …

1st Runner Up – The Power of Pania designed by Ivy Heta, Bella O’Kane and Tilly Berryman, modelled by Ivy

1st Runner Up – A Shellabration designed by the Dickinson Family – Nichola, Leo and Flynn, and modelled by Flynn

Supreme Award – Designer of the Year