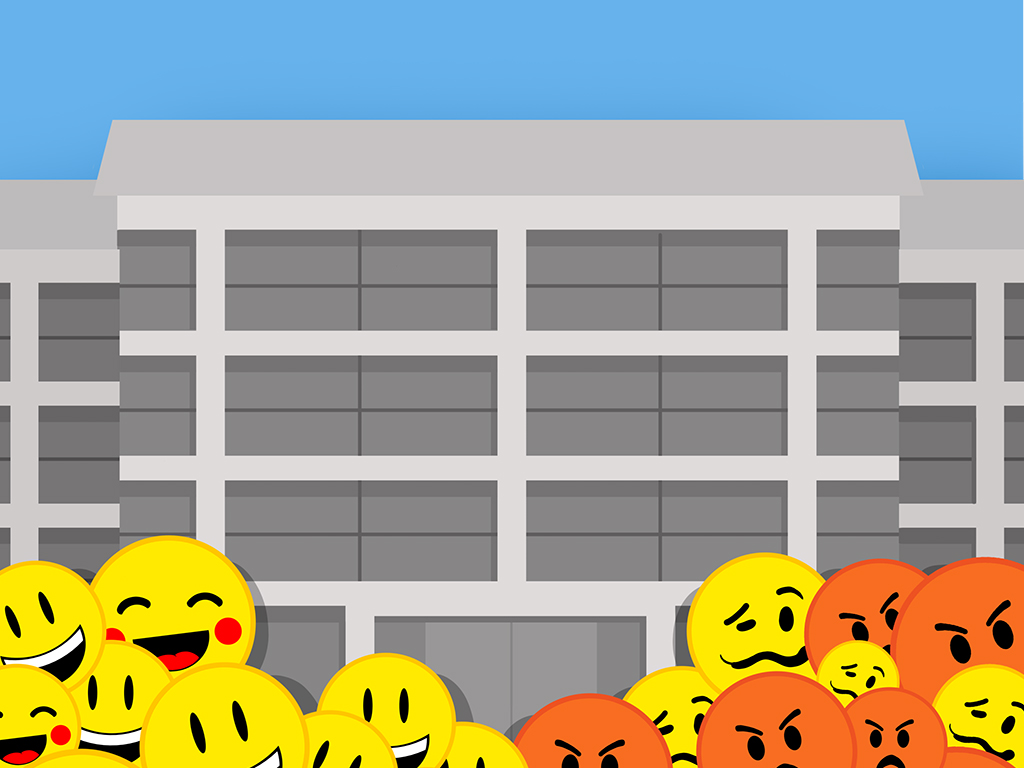 Once upon a time we had the Town Crier – ringing a bell and loudly proclaiming with a “Hear Ye! Hear Ye!” the latest news, announcements, or local bylaws to the townsfolk in the street.

Then along came moveable type, and newspapers with dedicated council reporters kept tabs on local goings-on for a long, long time.

Over the past decade or so, though, the big, traditional mainstream media networks across New Zealand and the world cut back their regional resources to protect corporate profits and focus on main centre happenings and central government decisions.

In places like Hawke’s Bay it’s meant less local news, or less depth to that news. Councils’ communications departments took up a fair bit of the slack with more press releases covering council work or decisions, but they and the remaining local media often copped flack for these press releases being merely reprinted verbatim without discernment or investigation.

To say there has been a “Digital Revolution” in media and communications of late is a massive understatement. You just have to look at the fortunes, or misfortunes, of traditional mainstream media outlets to see that the trade winds are blowing away from print formats and strongly in the direction of digital media.

With mainstream media seemingly abandoning much of regional New Zealand, provincials are using a bit of that legendary Kiwi ingenuity to create their own local hubs of news on social media platforms like Facebook and Twitter.

Moving to a far more direct and interactive form of contact with their residents and ratepayers on social media does have its pluses and minuses, though.

On social media you can’t just hide behind a press release like you can in a daily newspaper. It is social media, so there will be questions, interactions and even, heavens forbid, criticisms!

BayBuzz reached out to Hawke’s Bay’s five councils (online, of course) to get their thoughts and experiences on the move to digital communications and all have responded.

When asked “What different formats do the council use now versus, say, five years ago?” Napier City Council’s manager of information services, Duncan Barr said, “We are using the same digital marketing tools as five years ago (Google advertising, Facebook and Instagram), but the way we use them continues to change as the capabilities of the platforms grow. For Facebook and Instagram, Facebook Business Manager allows strategic targeting with various advertising options and engagement tools.”

Craig Ogborn, NCC’s communications & marketing manager adds, “NCC’s social media and digital marketing are now an essential part of how we communicate with our community, providing a platform where we can directly engage with residents. Previously, this kind of one-to-one communication would have had to happen in person or over the phone. The fluidity of digital marketing means we can optimise and measure all of our campaign activity so that we are reaching residents how, where and when they want.

“We’re also producing more videos to make it easier to engage and get our key messages across, and provide tools such as the rates guide, which make it easy for people to see the impact of any budget or policy changes.”

Hawke’s Bay Regional Council’s marketing communications manager, Drew Broadley, says, “Our digital communications have stepped up considerably – particularly over the last 18 months to two years. Five years ago our digital media probably accounted for about 10-20% of our comms, but will now be nearer 50%. We will need to increase this substantially over the coming 18 months as the shift to digital information increases exponentially.

“We have stepped up Facebook advertising in the last two years and over the last year we have started to use other social media channels, such as Instagram to reach younger markets with lighter content, i.e. Parks and Trails, and also LinkedIn for more thoughtful subject matter. Our website is increasingly becoming a knowledgebase which we update and develop continually based on online feedback.”

Wairoa District Council says the majority of their communications now go through online platforms, mainly their website and Facebook. “Five years ago traditional media formats were used a lot more and online comms would have made up less than half of our reach.”

While digital media has become a communication juggernaut, amongst Hawke’s Bay councils it has yet to make traditional media obsolete. “Social media is our base platform for reaching out,” says Naomi Fergusson, “but for topics that are important in terms of impact (the number of people impacted/cost to rate payers/significance of impact) we always still add in the traditional platforms such as print and radio.” This is a common theme throughout the councils.

For Napier City Council a successful example of how digital communications can be used was the recent draft Annual Plan 2020/21 consultation.

“Due to COVID-19 all face-to-face meetings were cancelled and replaced with Facebook Live sessions,” says Craig Ogborn.

“Over the three sessions, we reached significantly more people and saw a spike in submissions. Alongside these, a comprehensive digital campaign was established to reach and engage with Napier residents. This included creating content that worked across our website and all social platforms resulting in 45% of NCC’s website traffic coming from its social channels, with clear spikes in traffic that could be related back to the certain posts.”

NCC also encouraged people to use their dedicated community engagement website, www.sayitnapier.co.nz rather than fill in paper forms. “96% of submissions were received online and the Facebook Live sessions reached an average of just under 9,800 viewers each time.

During lockdown, video updates from the mayor, accompanied by sign [NZSL translation], were also a great way to reach the community.”

For Central Hawke’s Bay District council, the Covid lockdown was the beginning of streaming council meetings online. “Although council and committee meetings are now once again held in person, we have continued to live stream these meetings to our Facebook page. Viewership numbers of these meetings fluctuate with anywhere between 300-1,800 people tuning in to watch the live-stream through the course of the meeting,” according to communications and engagement manager Courtney Henderson.

Some councils’ meetings in recent years attracted criticism for their lack of openness and transparency. But now closed-door gatherings during working hours that may have involved anything from rubber stamps to mystic runes, for all we knew, have had their shutters thrown open. The advent of live video streaming has made it possible for almost anyone anywhere to be able to see local government decisions being made.

HBRC have live-streamed council and committee meetings for about the last six years. They use the services of a video-streaming company. The feedback has been good and ratepayers appreciate the transparency. “We normally get between 200-300 engagements and then have 47 people that follow our dedicated YouTube channel. This gets approximately 20-50 views after each meeting,” says Drew Broadley. 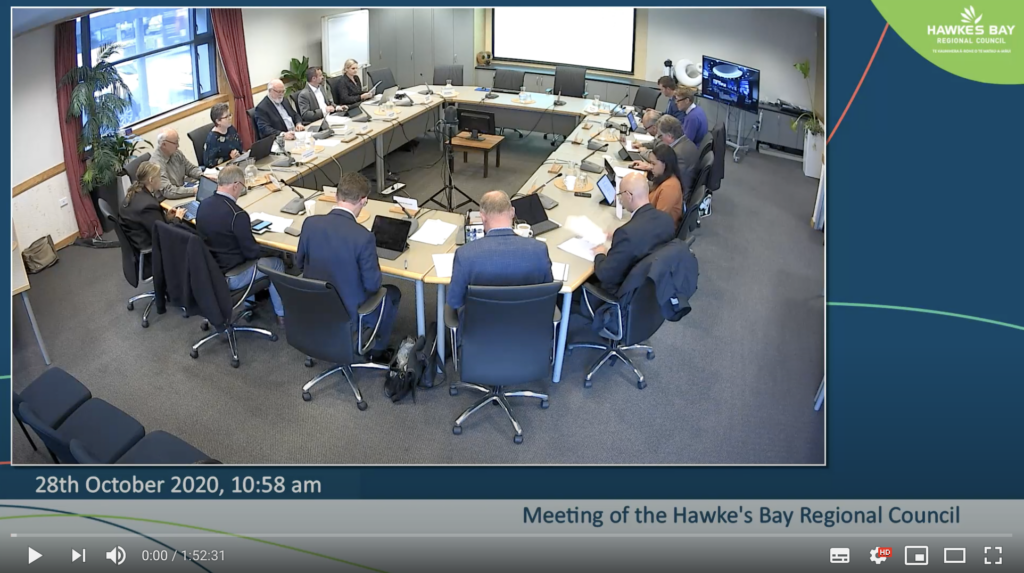 “The Facebook comments on live-streaming posts provide us with some instant feedback about what is being discussed in council meetings. We don’t receive a huge amount of comments unless the subject is a ‘hot topic’.”

NCC started consistently streaming their council meetings just under a year ago – a new feature for the newly elected council. For about a year before that they were occasionally streamed.

Ogborn says the viewership and engagement of streamed NCC council meetings can fluctuate depending on the topics covered, but has been averaging between 1,000-2,000 views at a time, with the highest reaching 8,700 views. “This helps keep our residents informed and provides transparency. It has also been beneficial for the mayor to do video updates following council meetings. These have been really well received, with some reaching up to 10,000 views.”

HDC began to incorporate live-streaming in late 2019, mostly for public Council meetings. “This enables a larger audience to tune in and see what’s going on in council and makes it far more accessible for people following a certain topic. We average about 2,000 views per video and generally the audience is quite a positive one. We don’t expect the majority of our community to mark it in their diaries as a ‘must watch’ but the fact that people can jump in and watch online makes Council more accessible and transparent, and enables residents to ask questions on the live-streaming post.”

Wairoa District Council trialled live streaming on Zoom during the Covid lockdown and say they are working on live streaming some community meetings and workshops on Facebook.

Like everything else in life some parts of social media aren’t all sunshine and positivity. One can’t expect everything posted online to be welcomed with fanfare, total agreement and conformity. Trolls and toxic environments abound on some platforms.

Council social media pages are no exception, given that decisions made in local government can be quite contentious or not appealing to everyone.

All the councils say they have guidelines for the content of their Facebook pages and have steps in place to deal with breaches or abuse. They also all said it was just part of what comes with having social media platforms that give such broad reach and direct engagement with their communities.

But it isn’t just about online abuse these days, either. Fake news and conspiracy theories have sprouted and spread faster than noxious weeds with social media platforms often acting as the world’s biggest greenhouses aiding their growth.

Like the others, Wairoa District Council notes, “If someone provides misinformation in a comment on one of our posts we seek to clarify and provide the correct information as this will benefit other members of the community.”

“Sometimes we do have to publish content we know is going to generate some heat on social media, because we believe in transparent conversations. We also see these as opportunities to correct misinformation. However, yes, of course that does generate some passionate comments. As long as people stick to commenting on the issue, we let people have their say, even if it’s not what we want to hear,” summarises HDC’s Naomi Fergusson.

Thumbs up or sad face emoji?

While measures of ‘likes’, clicks and online analytics indicate that Hawke’s Bay councils’ digital diversification is paying dividends, we wondered what those on the other side of the screen, keyboard, or smart-phone thought. So with our own online poll we asked BayBuzz readers how these moves online had changed their interactions with their local councils.

Just over half of respondents rate their local or regional council as having improved the level of engagement with its residents/ratepayers. Few see them backsliding.

Virtually everyone (95%) has visited a council website, where heaps of information is in fact available for those who care, with three quarters visiting a council Facebook page.

The same tools are used for speaking up. Almost 70% have entered a submission online, whereas 65% have emailed a councillor or council on an issue.

But while respondents say the digital tools have improved the level of engagement, and many do participate, many nonetheless believe it still hasn’t changed the actual outcome of decision-making.

About three in ten respondents agree councils take feedback somewhat or very seriously. However, 30% say councils “are not much interested” in our feedback and another 37% believe “councils mostly look for confirmation of decisions they’ve already taken”. More digital tools won’t alone cure that skepticism.

So while online engagement certainly seems robust, there may be a need for such involvement earlier on in the decision-making process and citizens need to see more evidence that councillors and staff actually listen.

Councils cannot operate effectively without public interaction and the more they interact in good faith, the better and more effective results can be!

With more of daily life moving online, so must councils’ engagement with the public. Hawke’s Bay’s authorities certainly seem to have a decent handle on this to date, with perhaps a tweak or two still required.

As council communications continue to evolve, one thing is certain – the revolution will be digitised!